Spring Fever For The Birds

The Buzzards are back and have been soaring all around the house since the middle of March--their usual time of arrival.  I’ve often wondered if they come back to the same place each year. This morning one soared right by our back window. It seems they are glad to be back and saying hello.  Dan has reservations on that theory.

It was a nice day so these Eagles were just out for a soar.  It’s such a joy to watch them catch the updrafts with their beautiful wingspan.    We are thinking they either have a nest or are working on one down by the river behind us.   The big Eagle nest over near the town of Clinton fell several years ago. The pair raised at least one baby before it got too big for the tree.  It is said the nests weigh around a ton. The turkeys are back at it.  They are a little hard to see since most of the grass still needs to be burned.  This picture shows what we think are several hens on the left and on the right are probably Jake turkeys hoping for a little action but the Boss is in the middle is in charge. 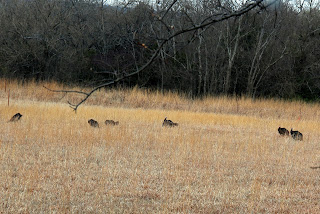 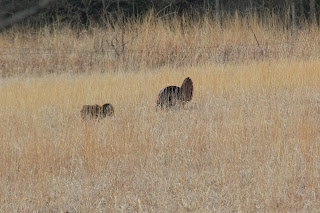 I think the pair of Collared Doves has finally made a nest.  They talked to each other endlessly. As do the Meadowlarks. For the Bluebirds, it’s just work, work, work.  They’ve got something going in the box. Definitely it's Spring and thankfully the birds are socializing.
Posted by Linda at 11:00 PM No comments: