Planning a road trip is half the fun

I can't lie.  I would love to just leave tomorrow for a road trip.  I've been thinking about taking off in the PW for over a week.   Here are a couple possibilities.

We should probably keep the road trip close to home.  So, I suppose that leaves out this: 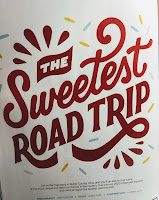 We receive a slick magazine published by Chevrolet.   In the latest addition they suggest the readers should take a 2020 Chev Equinox (go figure) and travel to about 40 miles northwest of Cincinnati Ohio for the Butler County Donut Trail.  There are eleven donut shops in about an 80 mile loop.  I think this would be a blast, altho a bit of a wreck for a diet (me) and blood sugar (Dan).  Still the possibilities of all those donuts is extremely tempting.  It is nearly a ten hour drive from here but I think there is a nice wine trail near Indianapolis on the way home.

By the way, in case you need schooled on donuts.  Click on the picture to make it bigger. 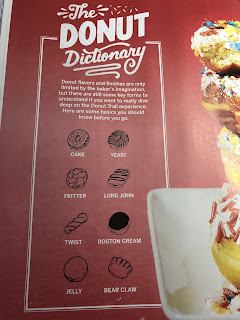 I seriously looked at the Great Salt Plains Lake in Oklahoma.  It is only four hours away via I 35.  According to the web site the State Park is still open.

The Lake has a high concentration of salt left from sea water millions of years ago.   I would like to dig in the salt flats for the selenite crystals formed by the saline water and gypsum.  This is the only place in the world where an hour glass shape is within the crystals.  After talking to Dan, though, we decided we better stay even closer to home just because we should do our part.

So, next week we are planning to drive south to the Ottawa area and ride on the Prairie Spirit Trail.  The entire trail is 51 miles from Ottawa to Iola.  So we will probably do a couple out and back rides.  We've ridden on a segment called South Wind Rail Trail near Iola.   I wrote about it here.

We'll see.  Like I've said before, it's a crazy time and maybe travel isn't in the cards.  I will plan anyway.  Because that's what I love to do.
Posted by Linda at 12:26 AM 2 comments:

We have undertaken a remodel project this winter.  Not in our home, but in our Pleasure Way RV.
The PW is a 2003 model and for the most part, we have not done much to it.  It is true that we probably only use it about 30 nights a year.  Really not enough to create much wear.  But, the past couple years, I have thought it needed an update and a brightening up.  It wouldn’t do me much good to show pictures.  I am not sure anyone is that interested in how to remodel a RV.  We just about have it finished.  If we ever get to take it out, I will take some pictures with a background that is more interesting than our barn

Part of the remodel project was making new window coverings.  I decided to brighten things up by removing all drapes that were on the windows in order to capture all the light inside that is available.  Then, at night, when we don’t want anyone to see in, we need total blackout window coverings.  I went to Bed Bath and Beyond and purchased a nice drape, brought it home,  cut and hemmed two coverings to exactly fit the windows.  I am pleased with how it all turned out.  And no one will be able to see through these drapes.

Making the blackout curtains to exactly fit the windows and stay in place is where  magnets come into play.

Who knew there was so many choices of magnates.  I found a web site that sells magnets and studied the pounds of pull or hold or whatever it is called.  I discovered I am pairing two magnets, they should hold the same pounds.  Since the magnets on the curtain would be sewn into several layers of fabric, I wanted some that were fairly strong—I think I finally settled on 3 pounds.  That’s actually fairly light, they sell some that hold 50 pounds!  That’s dangerous.

The package with the magnets came today.  There are already holes in the side of the windows from the old drapes.  That’s where I screwed in black, sort of decorative magnets that the curtain will stick to.    It was my job to screw the magnets  where I wanted them and Dan was handing them to me.
I don’t think anyone will fully appreciate how hard it is to handle a stack of magnets that hold three pounds unless you’ve worked with them.  Dan would struggle to get one off and the little spacer would drop and then the magnet would fly right back on the stack.  Then without the shipping spacer, it was nearly impossible to get them apart.  He got one off and laid it down for me, but when laid the next one too close, they would fly together.  At one point, they flew together so hard, it broke one of them.

We decided those magnets needed Social Distancing.   And, it worked.  We just laid them far enough apart that they didn’t sense each other.

Is there a day that goes by that we don’t talk about social distancing?   Just like the magnets, I think it is hard to be close to other people but keep apart—now they are saying ten feet.  Isn’t being close enough to shake hands part of our human behavior.  I don’t even think it’s learned, people—even animals—want to be close.    I saw a picture on social media today of a family we know poised on their front steps.  Apparently, there is a photographer in their area driving around taking pictures of families from the road to chronicle this totally unusual and crazy time.

It really does seem like we just need to stay quarantined.  Because, just like our crazy magnets,  if we get too close, we will be drawn in even though we know we shouldn’t.  People have said that this virus will change our behavior after it’s over.  I hope we will still be magnets.
Posted by Linda at 11:27 PM No comments:

How long can we last?

This question has been a topic of discussion lately.  Just how long could we go without a trip to the grocery store?

It has been nearly two weeks and we are still just fine.  Actually, I was looking in the pantry yesterday and I think we could go another week eating beans every day.

Why would I have so many beans?  Don’t judge me on this, but I often go to the grocery story without a list.  If we are in town, we will stop by the store for one or two things.  Since I’m there, I’ll walk a couple of isles and inevitably  see beans.  I’ll ask myself, do I need beans?  Then I’ll pick up a can or so just in case.  This is why I need to always have a list.  Or, better yet, peruse the pantry before shopping and take note of what’s in there.

So, I just went to the pantry to check for the sake of this post, I have Kidney-4, Butter-1, Cannellini-3, Black-1, Chili-3, Chickpeas-3 and no baked beans.   In my defense, I often add different kinds of beans to soups but definitely we could live on beans for a while.  Which is a good thing—they are very healthy.  Just writing this makes me think about black beans and rice, maybe tomorrow. 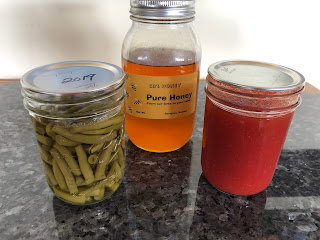 The honey is from our bee lady as payment for the three hives she has on our place.   I have 10 jars of green beans and 6 of the tomato juice.  There are bags of  sweet potatoes and squash in the freezer.  All of this produce is from last summer’s garden.

Who knows how long we could live without a grocery store.  Quite a while I think.  However, we love our fresh vegetables and fruits.  Eggs are a stable.  As is cottage cheese.  But, I think I will make an effort to see how long we can “eat out of the pantry.”

I could have added “over” to the title of this post.  Our family, neighbors and friends have called and texted to make sure we are OK.  I guess at mid 70s, we fall into the high risk category.  Today  we received a call from a neighbor with a big family telling me she had gone to Lawrence looking for milk and brought home three gallons.   Not knowing about her purchase, her husband ran to Topeka for a farm part and grabbed two gallons.  So, did we need milk?  I said, “thank you for thinking of us, but we’ve been drinking Almond Milk and we’re good.”  She said, “That’s OK but just know milk does not grow on trees.”

Tomorrow we are being treated to Vegan Lasagna made by daughter Kim and Marc.   I know it will be delicious.

We are also being watched by the inside.  I looked up from my comfy chair after lunch and saw this. 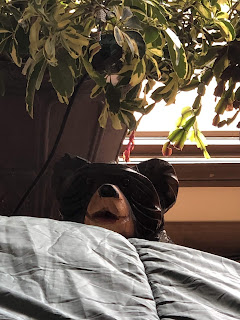 Why this bear is peering over a pile of sleeping bags in the living room while checking on us is for another post.

Then late this afternoon, neighbor Christi brought over another animal to watch over us 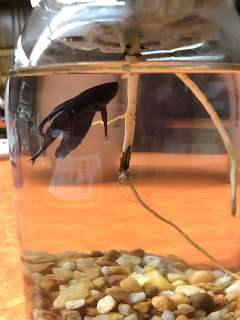 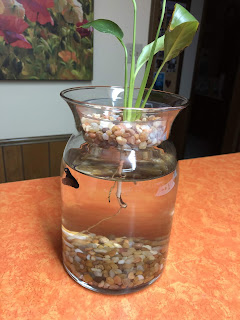 I think this is called hydroponics.  The fish poo feeds the plant.  They say watching fish is soothing.  Unfortunately, this Betta will be a loner because watching him eat another fish might not be quite as comforting.  He seems to enjoy watching us though….
Posted by Linda at 10:14 PM No comments:

I am sure you are like me in that one more mention of any kind of virus will end your reading right here. So, viruses won't be the subject.  Instead, daily habits during these days at home.

Last week I  started something new—walking.   The kick in the rear to start last Sunday is my participation in Walk Kansas.  I am on the Stull Stutters team and we are walking to the Eight Wonders of Kansas—virtually of course.  So far, I’ve walked around two miles a day on the treadmill.  Feeling pretty good about getting back in the routine.  I think all five members of my team’s total walking miles goes towards the goal.  I hope so anyway.  Not sure I would make it to wonder number two at my rate.

By the way,  what are the Eight Wonders of Kansas?  1/ Great Well at Greensburg 2. Cheyenne Bottoms 3. Cosmosphere Hutchinson 4. Eisenhower Museum/Library 5. Salt Mines 6. Cathedral of the Plains, Victoria 7. Tall Grass Prairie and 8. Monument Rocks.   We’ve visited most of the Eight, most recently the Monument Rocks. 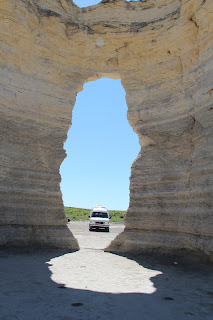 I decided this week, I am going to post something every day on my blog. At least I am really going to try.  Maybe I’ll get back in the habit of writing.  I miss it.