Today it snowed!  Big flakes, heavy for a while, but no accumulation.  That would be par for this winter.  We did a short roadtrip to the north Kansas City Costco yesterday and couldn't believe the flooding on the Missouri River on north 435.  The destruction in Nebraska due to flooding is record breaking.

As I thought about what seems to me to be an unusual winter this year, I decided to look back at blog posts from year's past.

On April 1, 2005 and April 1, 2006 I posted that the Pelicans were spotted migrating back through the area.  We spotted a large group of white birds in the distance on our way to Clinton several days ago that just about had to be Pelicans.  Also, we spotted Turkey Vultures or buzzards as I like to call them, on or around March 16th,  just as we do each year.

On March 30, 3010, I snapped a picture of a Yellow Bellied Sapsucker.  I looked out the window a couple days ago and there was one looking right back at me.  So, they are here as usual.

On April 1, 2013 we were celebrating Easter.  From the time this picture of Kim with this fabulous walleye was taken to now, she and her family sold the house on Lake Jivaro and moved to North Carolina and then moved back and purchased another house on Jivaro.  They have tried several times in the past week, but still no luck with walleye this year. 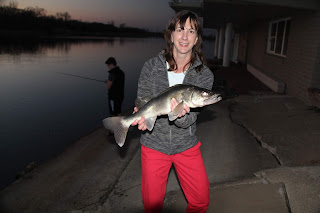 On April 1, 2014, I posted a little movie of us picking up rocks.  Spent a day doing that this week.

April 1, 2015, we  nearly froze our water system in our little RV in the Smoky Mountains coming back from North  Carolina.

Frost in the forecast for tonight, but a fairly nice week ahead.  All in all,  we are probably on track with spring as usual.