It was about 10:00 am on Monday, January 21st, that we decided to run an errand.  Someone was watching our driveway to see us leave and cameras here at the house were watching while we were gone.

It's hard for me to figure out exactly what time because the time stamp on our cameras is off.  But it was close to 11:00 when someone came to our door.  He knocked, knocked, held his phone up and waved it around like he was trying to get a signal, knocked on a window by the door.  Then he did this: 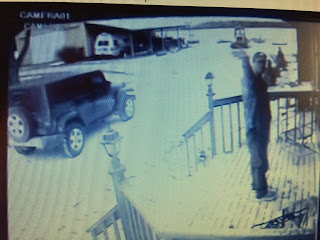 He actually waved at the security camera.

For 7 1/2 minutes he walked around the house and tried every door and knocked and looked in windows.

Then he put his shoulder into it and knocked in the back door--a door with a dead bolt no less.  The following is his timeline for loading his Jeep:   In about 4 minutes he came out the front door with the first load that included electronics.   Another 4 minutes, miter saw.   Another 2 minutes, jewelry.  He moved up to the barn, 1 1/2 minutes in our RV, flashlights,  2 minutes in the barn, misc tools, 3 minutes,  a small generator.  He was gone in 23 minutes. Taking out the time he spent knocking on doors, he spent about 15 minutes stealing stuff.

The Douglas Co Deputies got here quickly.  We accessed the video from the cameras and they made a copy for their records.  They carefully inventoried all we could tell that was stolen.  By then it was about 2:00 pm.  They left but in about 5 minutes they came rolling back with another police officer.  He must have been on his way and just got here.  He came in and used the "Find My Phone" app on my phone to find the location of the iPad that was stolen.  It located at a motel in Topeka so off they went.

When they got to the motel, the Jeep was there.  Come to find out, the motel room was under surveillance by Federal Marshalls. (No idea why but speculating gun trafficking)   So, when they guy stepped out to smoke wearing the exact same clothes as in the waving poise, he was a done deal.  I would have loved to see that--police all over the place.

This mug shot was in today's Topeka paper.  No one told us any names, but since this guy looks like the one waving at our cameras and his violation says, "holding Federal"....

Today we went through the process of getting our things back.  And, we were surprised at what he had taken that we hadn't missed (my Channel perfume for one thing).  The only thing that seems to be gone for good is the miter saw.

Our thoughts about all of this have been of two kinds.  First, its unsettling that someone could so easily break into our home.  The thought of someone walking around, throwing things on the floor makes us mad.  On the other side, we were so impressed that the Douglas County Sheriff's department spent so much time on a relatively insignificant (although not to us) crime.  They treated us and our home with respect and kept us informed all along the way.  The fact that they and others actually apprehended the guy is amazing.

We told one of the deputies that we felt like the whole thing was like a "Cops" episode  on television.  He smiled and said, "Unfortunately, they all don't end this way."