In case there are still friends out there who are checking this humble blog, I am going to spend some time catching up.

Tonight, I can hear the wind and see the snow by the light on the barn.  Dan has been watching the weather today.  He thought maybe it would miss us.  We even saw a map on the news earlier that looked at that time as if it might be east of us.  However, I see by my computer weather news feed that I70 west of Topeka is struggling. Our grandson slid off the road on his way home from his friend’s house this evening and it was so slick that a four-wheel drive pickup couldn’t pull him out.

One of my favorite Christmas traditions is preparing, sending and receiving cards.  I still have the cards we received this year on my bulletin board.  I had an idea the first week of December to crochet little stars for each card this year.  Good idea too late.  So, no one on my Christmas card list received little crocheted stars.  I told Dan I was going to start making them right away for next year—I’ll have to let you know December 2019  on that one. 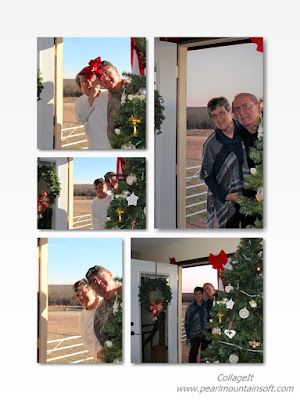 The one we finally used is bottom right.  I can’t believe how hard it was to get a decent picture by setting the timer and running back into the picture.

It is pretty obvious we were having nice weather two weeks before Christmas.  Although it’s hard to see in the background, but the pond was down so much that the dock was nearly out of the water.  With the nice weather came a dry fall.  In contrast, the dock is now totally afloat.  The pond is actually only about a foot below the overflow tube.  This past week has had welcome moisture for sure.
Posted by Linda at 10:30 PM No comments: