Moving on south from Johnson's Shut In on Hwys 72 and 21 for an hour, we arrive at Big Spring Campground in Van Buren Missouri for the night.

As much as we have always enjoyed our float trips, we have never floated the Current.  The Current River is designated a National Scenic Waterway (on sign below) and I am sure it is for a reason.  As it flows south, it becomes a tributary of the Black River (Johnson's Shut In).  Eventually the Black River flows into the White river in Arkansas. The White River flows into the Mississippi. We always float on the North Fork of the White in south central Missouri.

Forgive my rambling on about rivers.  I do find it all fascinating and have been know to lean over maps with my magnifying glass trying to figure it all out.

Big Spring Campground was nearly vacant.  Two other campers were there spread out over the 123 sites available.  We found our place away from other campers and quickly found enough wood for a nice big fire before dark.  In the process of finding wood, Dan saw evidence of pig rooting so he set up the trail cam we carry.  I wish I could put a nice picture of a pig on here, but we only got a possum and it was blurry.  Got to love this fire, though.  The Current River is right over the bank from the fire. 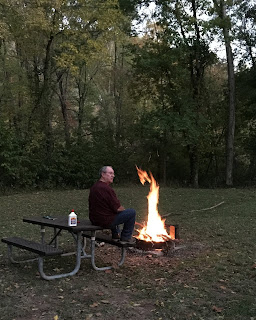 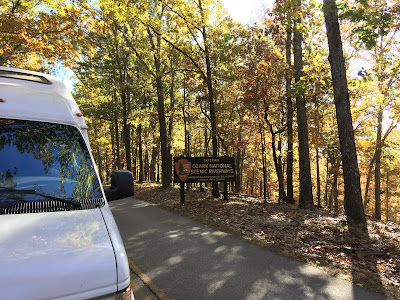 We are now turned toward home and the decision was made to just drive on in.  Usually, this is about the time I get upset because I am not ready to go home, but Ha Ha Tonka is another stop.  There is a cold front coming in the next day and I am nervous about winterizing the PW.

Ha Ha Tonka means "laughing waters" and it is said that is the name given the spring by the Osage  below the hill where the remains of the castle is located. 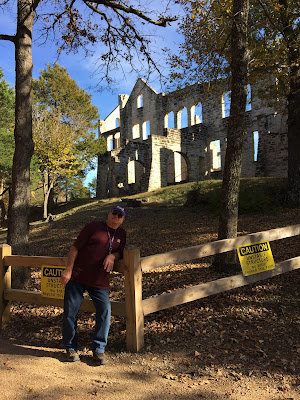 A wealthy Kansas City businessman named Robert Snyder had a dream of building a European style castle.  In 1905 he found the the perfect place overlooking what is now Lake of the Ozarks.   Mr Snyder never saw his dream completed because he died in Missouri's first automobile accident.  The house was finally completed by his son in 1920 but the family's money ran out.  It was then run as a hotel and lodge until 1942 when the entire building was ruined by fire. The family was one of many who opposed the building of the Lake of the Ozarks.  It is still a beautiful location with the lake in the background and a nice break from a roadtrip if in the area.  Looking out over the hills and lake, the trees were in their prime. This is when I really missed my good camera. 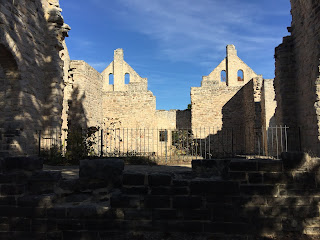 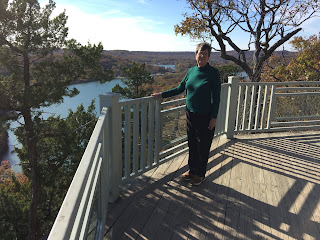 As we approached Stull and nearly home around 8:00, we wondered why we don't do more of these kinds of trips.  Maybe I'll make a list of three day roadtrips for the future.....
Posted by Linda at 12:07 AM 2 comments: