Backroads and small towns are on the way to Johnson's Shut Ins State Park, a 8,781 acre park on the East Fork of the Black River in southeast Missouri.. 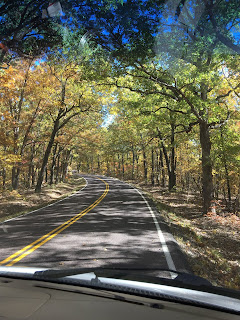 So, does everyone but me know what a "shut in" is?   There were three informative movies which explain it so I recommend  the visitors center first.

Here is a very general overview of what we learned.  Millions of years ago, there were volcanoes in this area of Missouri.  The process of heat and cool created different kinds of rock.  Some of the rock easily changed with running water whereas other rock remained solid.  As the water flowed, the softer rock wore away creating unique areas called shut ins.  The shut ins in this state park created what could be called a natural water park.  Water flowed, backed up into pools and then moved to other pools often creating small waterfalls.  This is not a totally unique situation in Missouri, but this is one of the largest gathering of these rocks.

We also learned of the breach in the dam of a reservoir at the top of Taun Sauk mountain (the highest mountain in Missouri) on December 14, 2005.  A wall of water followed the Black River through Johnson's Shut Ins park causing a great deal of devastation.  Thankfully, the shut ins were not harmed, but camp grounds, walk ways and the visitor's center were a total loss.   The park did not fully reopen until 2009.  There were no lives lost but the park ranger, his wife and three children were injured when their home was destroyed. 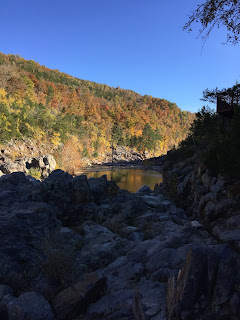