The Saga of Water Line Leaks

We feel fortunate for our well maintained waterline.   Wells are not an option where we live, so an extension of a fairly new rural water district system to the edge of our place was the reason we purchased this land 40 years ago.  So, of course, 40 years is the age of the pipes that bring the water to our house from the meter—about a third of a mile.  We’ve had no problem with those pipes for all of these years.  Until now.

Our water usage has gradually increased since the first of this year.  We turned off our hydrant down by the garden when not in use.  When that didn’t help, we purchased two new low water usage toilets.  That didn’t really show any improvement.  Then we planted a garden and did a little watering  and thought that was why our bill was bigger than we thought it should be.

Finally, in April of this year, we got serious about trying to find what was going on.  Using a post hole digger, we dug three holes where it looked like there was some evidence of extra water by how the grass looked which was about 50 yards away from the house, up toward the meter.  Sure enough, one of the holes was nearly full of water after about eight hours.  After $385.00 in time and backhoe use by a company that specializes in fixing water lines, the small leak was found and fixed.

Then, with traveling and thinking we had the problem fixed, we didn’t check our water bills  which are auto paid each month—until July 1st.  That bill was $215.00 and showed that we were using 120 gallons every hour.

That got our attention and when we checked, our meter was whirling.

Again, out came the post hole digger.  We dug a hole every place there was extra green grass.  One hole, directly out from the hydrant in front of our house was full of water the next morning.

We decided, two people in their 70s could still dig a hole.  The whole backhoe situation would play havoc with our front yard.

First, Dan used the tractor to scrape off the turf. 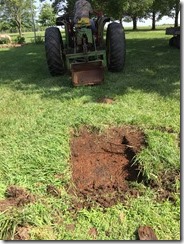 Then, we dug straight down.    As when we dig anywhere around where our house sits, we had to spend time extracting a big granite rock on the way down. 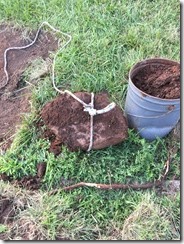 It turns out, we were almost perfect in our estimate of where the leak was located.  About four feet down there was the water pipe and it was definitely leaking.  There was also something right on top of it as well—a tree root.  And, we soon discovered there was a granite rock directly under the water line.    This isn’t a good picture, because you can’t see the rock and we have already cut part of the root. 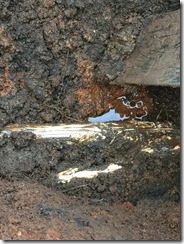 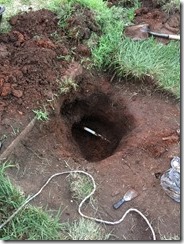 We enlarged the hole, turned the water off at the meter and went to work to successfully fix the line.

Here is the most interesting thing about this whole situation. 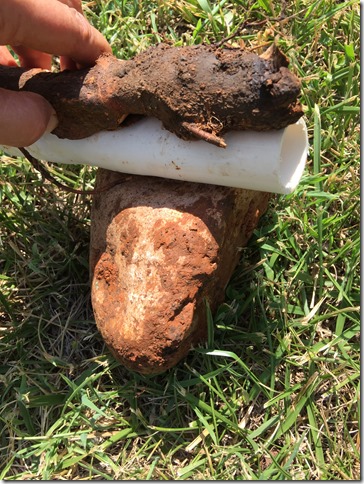 This picture shows how the leak developed.  The water line was laid right on top of the rock 40 years ago.  In fact, the granite rock actually had a little grove where the pipe laid on it all those years.  Then, the tree root came along and grew right along the pipe.  As the leak developed, the root got bigger and pushed the line down harder against the rock.  And, that’s how our water bill continued to gradually get larger.

We will definitely be tracking our our usage because, you know how these things occur in threes.