Green Hope High School graduation ceremony began at 12:00 noon on Wednesday, June 13 at the Raleigh Convention Center.  There were over 750 graduates in attendance.  The speakers were members of the Class of ‘18.  This graduating class has to be one of the most diverse group of young people in the US.  The lady who read the names did an outstanding job.

At this point, using my little laptop, I have not been able to organize the pictures.  Also, the pictures taken with a cell phone seem to be small.  However, here they are.  We had a lot of fun helping Aaron celebrate his big day. Click here or on the picture for more! Southern Virginia New River Rail to Trail State Park is considered one of the Nation’s Premier Rail Trails and has been designated an official National Recreation Trail by the Department of the Interior. In 1986 the Norfork Southern donated its abandoned track for the purpose of this bike trail.  The New River itself is historical in that it is the oldest river in the United States. For all of these reasons, plus the fact that this rail trail is not too far out of the way from Kim and Marc’s, we decided to ride at least part of the 57 mile trail.

Our plan was for me to start at Galax and Dan would drive up the trail and we would ride toward each other.

The Galax to Fries Junction section that I started out on is actually not along the New, but along a tributary Chestnut Creek.  Comments on the trail web site led me to believe this was a nice part of the trail to ride.  And it turned out to be exactly that.

First, the trail is flat and well maintained.  Most of the trail is open to horseback riders but there was little evidence of their use.  At first, I rode right along with nice views of the gentle creek.   Soon as more little drainages added to the size of the creek I was excited to find rapids forming and even several waterfalls.  I was along side the creek most of the time, although enjoyed Virginia ranching landscape too. There was a cute little store but I had to pass as I didn’t bring any money.

I always enjoy the tresles of which there were many.  My favorite, though, are the tunnels.  The one I encountered looked onomous because it was completely dark at the entrance—spooky because I was by myself.  I considered waiting until another trail rider came along, but thought that would be unadventurous on my part so I tentatively started in.  No sooner had I got about twenty steps in than the tunnel curved enough I could see the end.  Still, there is nothing like seeing light at a distance and it being completely dark in front of where I am riding.  It is disorintating and makes me feel like I losing my balance.

Chestnut Creek entered the New River and at that point, there was a beautiful long tresle over the big New River.  So exciting but still no Dan .  I thought I would meet him at the tunnel when we parted.

Turns out the place we made out to meet had a very long a curvy road which did not lend itself to speedy travel.  He mostly missed out on a great ride. 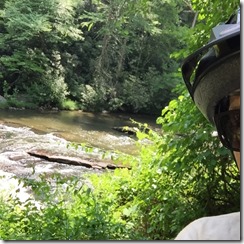 This is not a sign travelers often see.  In fact, staying off the grid is considered by some RVers as kind of cheating.  Then a clever computer person, seeing a need, created the web site Boondockers Welcome.

Basically, it is a site where people sign up to host other RVers at their home or on their land. Self contained travelers then go online and ask to spend a night or two.  The host has to approve the request.   Of course, there are profiles etc.

So, that is how we found one of the most beautiful and serene places to camp near the New River Rail to Trail.  It wouldn’t be fair to the hosts to tell the exact location but I will say it is close to Galax Virginia and right next to a beautiful tributary of the New River.

Our hosts were friendly and gracious.  They opened their front porch to conversation and we left feeling like we were friends.  We learned local history and about the surrounding lands.  And, what is it about that southern accent that seems so friendly and laid back?

We will definitely be using this web site again. And thank you to Jim and Andrea for a memorable stay at their lovely summer home. 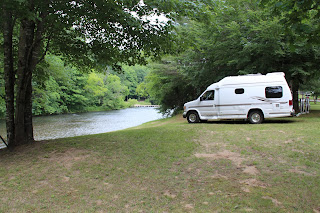 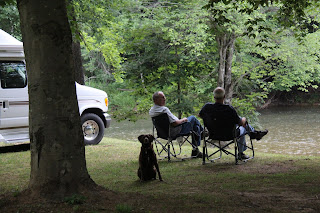 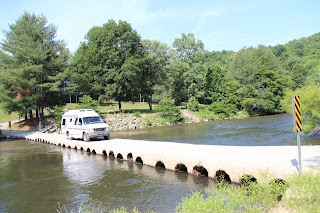