This past weekend we traveled south to Camp Chippewa, a UMC sponsored facility located near Ottawa Kansas,   to help prepare the buildings and grounds for the coming camp season.  We met two other friends from other parts of the state, all of us with RVs.  There were others who stayed in the dorms.  We worked hard but found time to catch up with new and old friends.  We parked our RVs in  temporary sites because the dedicated RV sites the camp provides were filled with UMC Nomads there to put new siding on one of the cottages.  (The Nomads are an interesting concept and one that I could be enthused about)

Camp Chippewa has an interesting history.

In 1837 the Chippewa Tribe along with the Munsee and Sax and Fox tribes from Wisconsin were given an 8280 acre strip of land where the camp is located.  Members of the tribes were given 40 acres of land and after becoming citizens of the United States in 1900, were able to sell the land.  In 1958, 219 acres were given to the United Methodist Conference to be used for camping ministries by Rev and Mrs Charles Funk in memory of their granddaughter who died at the age of 14.  Through careful planning the camp is now 640 acres.

All of this land and the use of its facilities is pretty much run by three hard working, dedicated people.   During the summer there are additional paid employees, but it is with volunteer help that many projects are accomplished within the camps budget.

It was a beautiful weekend and there were people everywhere.  We took our Ranger ATV so it was immediately put to use in a ambitious fencing project.  A  farmer from the Parsons area brought in a semi loaded with large equipment including a posthole digger and brush cutter to clear for the fence.  Dan worked two days on this project, including cutting hedge fence posts for supports.  He took me to see the finished project which this picture is only a short part.  It was exhausting work but he enjoyed his fencing companions. 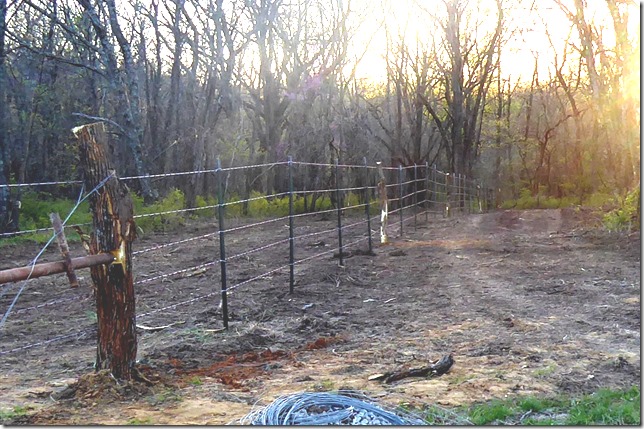 The fencing is to accommodate and rotate the 40 plus horses into different pastures.  The reason for so many horses is for the popular horse camps each summer where each young person is assigned a horse to take care of and ride for the week.  There are also other animals to teach responsibility of care. 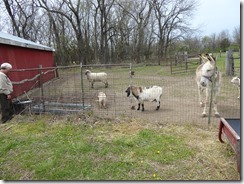 I was on flower and landscape detail most of the weekend.  We cleaned flower beds, replanted annuals, and pruned overgrown plants.  There was an old farmstead on part of the land so we dug up a bunch of Iris and transplanted them around the campus. 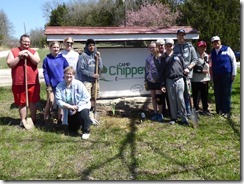 Here is a picture of our transplant detail.  The kids are a part of a UMC youth group.  They were a lot of fun and willing to work. 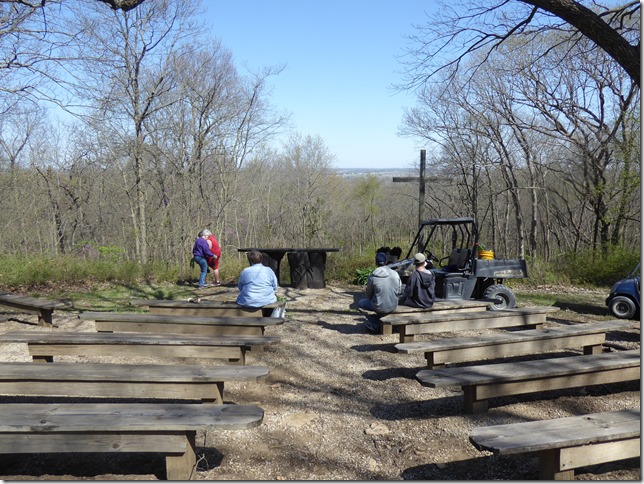 This is one of the gathering places where we put our transplanted Iris and Day Lilies.   This is a beautiful location as it looks out over a valley.

Somehow I didn’t get in on the best job of the weekend.  That was to catch fish in one pond and transfer them to another.  I know the two ladies in the canoe had worked hard on other projects but the day was perfect,  the fish were biting and they were having fun by this time in the evening.  This is actually what summer camp is about and all of us were encouraged to enjoy the experience of Chippewa while helping out. 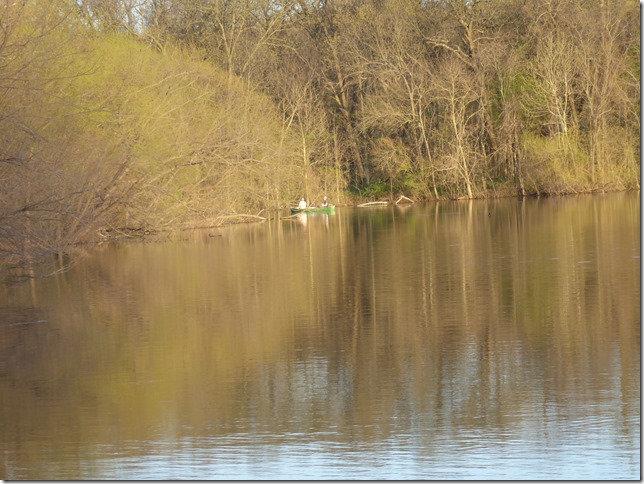 The volunteer weekends are twice a year, before and after scheduled summer camp.  The weekend is filled with eating wonderful food,  working and sweating and Christian fellowship.  We will be back—next time I’m looking into that fishing detail, though.