Don’t Knock It Till You Try It 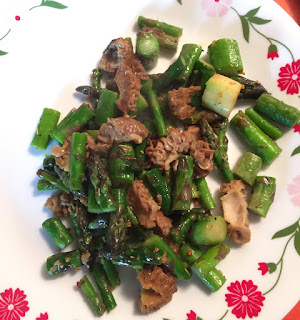 Asparagus and morels cooked together in butter. Tried it by chance last year. Still delicious with first pickings of both
Posted by Linda at 11:14 PM No comments:

By the time we get to the I40 stretch in Texas, even I am getting anxious to enter Kansas and on home.

But, then there is Groom Texas.

The town of Groom is out in the middle of Texas nowhere 42 miles east of Amarillo.   Until I40 was built, it sat along side Route 66.  Heading east, the first sight that made me scramble for my camera was this gigantic cross.  This isn’t the first cross we’ve seen, but certainly it is the first sitting out on flat Texas landscape. 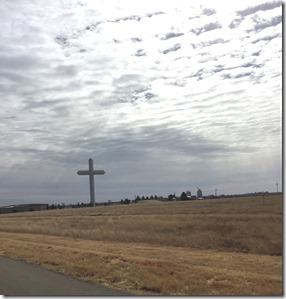 It turns out Groom Texas has the seventh largest free standing cross in the world at 190 feet!  To the right of the picture is a grain elevator which puts the structure in perspective although the cross is closer.

But, wait, there is more! 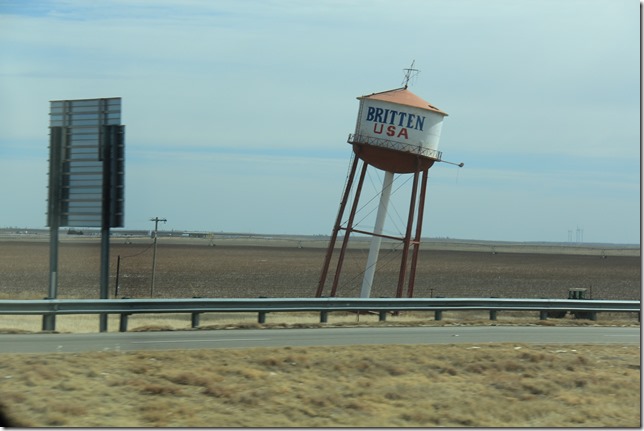 Back when Route 44 was still a busy road west, Ralph Britton built a truck stop.  He also purchased this water tower from the town of Lefors Texas, 34 miles away.  He managed to drag it here,  wrote his name on it, then bulldozed  it until two of its four legs were off the ground.  According to the web site, his family said this worked in his favor in that people driving by on Route 66 would veer off the road to let Mr Britten know his water tower was tipping over.  He would then invite them to sit down and enjoy a drink or meal.  Unfortunately, his truck stop burned down but the water tower remains for people like me to scramble for a camera to capture something we think has just happened.

As I said in the beginning, we were “headed to the barn” and there was very little stopping.  So, these pictures are not only taken on the run but with a cell phone.  Another time I might have to give Groom Texas a little love.