A Little Cheer on an Icy Day

I say geraniums and most think summer and outside planters.  The thing is, if there is a south window with lots of sun, they will keep blooming all winter.  I get the best results if I cut them back a bit in early fall so they don’t get lanky as they are starting to do in the picture.  There is one drawback as is apparent in the picture, they leave little red peddles all over the floor all winter.  Totally worth it to have these cheery flowers non stop from the time we bring them in. 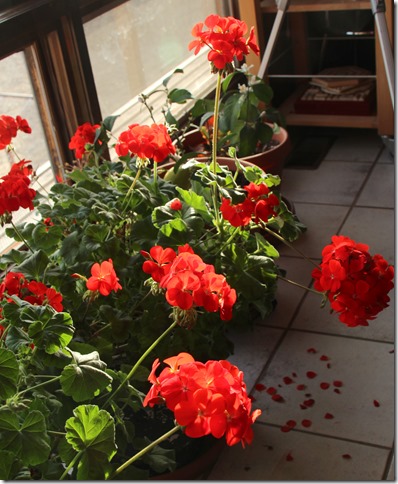 In the upper part of the picture there is another plant that isn’t too clear.  Here is another winter surprise.  And, I guess it feels spring in the air because it is now covered with blooms.  It looks like a lime, but it is a lemon.  If I let it turn yellow, it is over ripe. 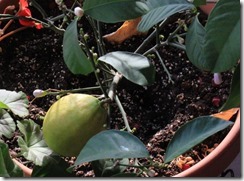 Unfortunately, I don’t have a picture of my violets blooming.  I’ve given starts to several friends and their plants are blooming like crazy—mine are growing but no blooms.  I repotted them last summer and I think they are still getting used to their new digs.  At least that’s what I’m telling myself because  I’m a little prideful about my violets.

Could there be a better weekend than to spend it with good friends, good wine and chocolate?  I don’t think so.

This was one of those plans that began with, “we should” but instead of what usually happens in those times,  we acted, ordering our tickets for this popular Hermann MO wine trail before Christmas.  It was a great idea.

We seldom travel without taking our trusty PW, February and freezing temperatures included.  That means we managed without the water system—easier than one might imagine.  We also were able to plug in at the Hermann City Campground. We ran our little electric heater and stayed warm at 70 degrees.  Saturday morning was a surprise, though. 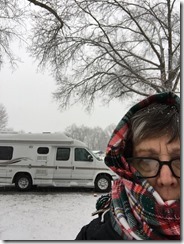 By the time Ray and Carole picked us up at 9:30, the snow was beginning to melt. Wine and Chocolate awaited so we decided to visit the outlying destinations first.  Bias Winery served Gooey Black Bottom Cupcakes paired with River Mist.  In the end, this pairing was unanimously our favorite.  It might have helped that we were the first there and they were still warm!  We were determined to make the day last, so we broke out the Wine Trail cards and began our two day marathon of playing “Sevens.”

It was getting close to lunch and Robller’s Winery at New Haven has lots of room and a nice fireplace.  We picked up our Mexican Chocolate Mole paired with Gabrielle’s Blush.  Interesting use of chocolate.  We also added crackers, cheese, olives and another bottle of wine and more cards.  Robert, the owner and winemaker at Robller’s came by our table several times.  He is always interesting with lots of history and information about his winery and others in the area.

On to OakGlenn Winery where we were served Red Pasta and Chocolate paired with Norton.  OakGlenn has a beautiful location.  No cards this stop, just pictures. 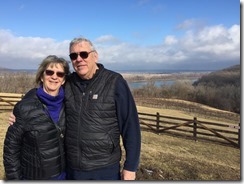 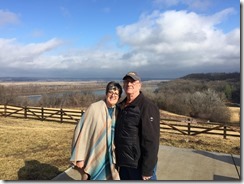 We ended the day at Stone Hill.  Their White Chocolate Mousse with a Vignoles Cherry Sauce served in a dark chocolate shell paired with Vignoles was delicious and was a close contender for first.  There was a table just right for more cards in their atrium.

Can you believe  all four of us in our little camper?  I mixed up Chicken Noodle Soup—with more wine—and it tasted about right after all the chocolate.  Ray and Carole went on to their motel because I think they were getting claustrophobic.  We watched “Bucket List”  A good movie for travel.

The wine trail began an hour later on Sunday morning, so we ate breakfast at the local diner.  My pancakes were delicious.  Then on to Dierberg Star Lane Tasting Room.  Dierberg is a California wine owned by Hermannhof.  The wine was delicious with their Chocolate Torta Soffice.

Next door is Hermannhof Winery where we enjoyed White Chocolate and Toffee Blondie paired with Germantown wine.  Another excellent offering that was near the top.  Hermannhof had a nice fire going and plenty of empty tables so we played more Sevens.  Before leaving we asked permission to poke around their cellars.  Actually they are quite beautiful. 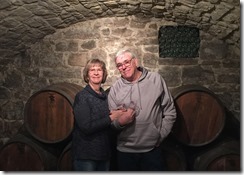 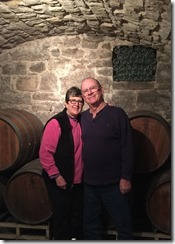 The final winery was Adam Puchta were we were served Chocolate Chip Scone with Brie Cheese and Berry Black Reduction paired with Berry Black wine.  I like scones so I thought this was very good. I think it would have been better the day before—the scone was a little dry.

We wanted to pick up a little wine at Stone Hill so it was back to playing cards in their atrium and eating a late lunch with crackers and cheese.  Ray won the final round of cards that had a $5 bill on it.

We left the Hermann area by 4:00 pm with no problems on the road.  Hermann Missouri is only a four-hour drive and we always have fun there.  We wondered on the way home how many times we’ve been there.  I’ll have to count sometime.