When we climb aboard the PW, there usually are no hard plans.  This time, when we left home at 9:00 am on Thursday, April 20th, we were headed to the J Percy Priest campground just east of Nashville.  We like the National Park campgrounds because our Senior Passport allows us to only pay half the cost of a camping spot.  We are always trying to find the best stopping spots for our trips to North Carolina to see our family.  This stop is close to I40 and, at 9 to 10 hours, a good first half.  Our spot was quiet which allowed us a good night’s sleep.

As it turns out, it was good we had this stop because the second half of our trip to High Point North Carolina to see Aaron and Adam row in the NC State meet was mostly rainy and filled with slowdowns associated with accidents and construction.  When we left Friday morning, the GPS said we would arrive at the regatta lake at 5:30pm.  In reality it was 8:00.

The campground near the regatta  was full due to our late arrival.  The gate to the regatta site was locked so no chance to park near there.  Plan C WalMart nearly always works.  We slept fine and arrived at the Regatta site in a timely manner.  Thankfully, the rain stayed at bay but not the wind.  Finally, due to the choppy lake, they cut the regatta rowing lengths short.

Here is a picture of Aaron in his boat that shows what the boys were dealing with. 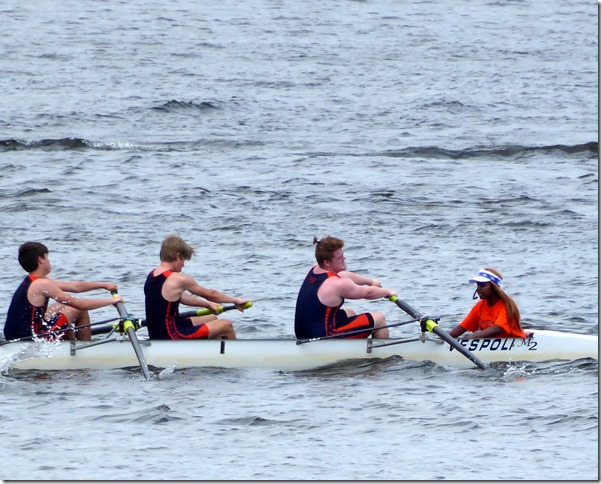 The boys did great in their race.  I will upload more pictures of the High Point Regatta along with the Dogwood Regatta this coming weekend at Oak Ridge Tennessee as a slide show later.

After the regatta we drove an hour up to  Virginia to ride the New River Rail to Trail.  That was after eating at the Foothills Brewpub in Winston Salam NC.  Foothills is a rated as a top brewery in the area.  Food was delicious too.  The drive to Virginia was wet—a hint of things to come.  More about that next time.