There are no rails to trails here in the Mesa/Apache Junction area—really none in the entire Phoenix area.  However, there are very well groomed bike trails along the numerous canals that bring the precious water into the region.  Our favorite is the Eastern Canal Bike Trail that can be accessed from the Riparian Perserve at Water Ranch in Gilbert AZ, only about 15 minutes from where we are staying.

We have visited the Water Ranch before and I wrote about it here.   There is also another blogger calling herself the Dragonfly Woman who also visited and wrote an interesting article about it here.  Here is a screen shot of how the Ranch looks on a map. 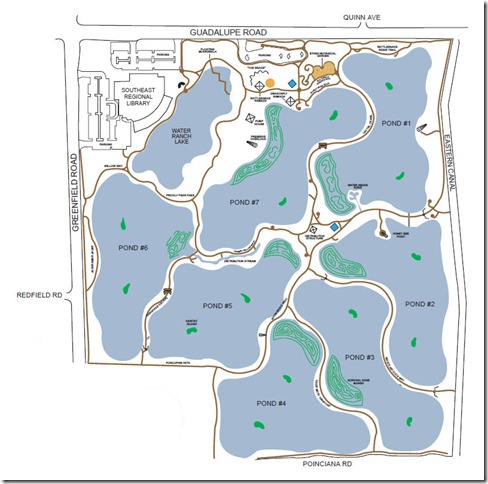 The lines between the water are bike and walking trails.  Not all the ponds are full at the same time.  All the water is reclaimed except the water in the fishing pond, which is filled with fresh, clean water pumped up from the natural resevoir below the other ponds.  It is an interesting concept.

To the right of the picture is the Eastern Canal trail.  We rode ten miles total with probably eight on the canal trail.  We took our time and enjoyed the beautiful day.

Here are three birds of interest spotted on various ponds. 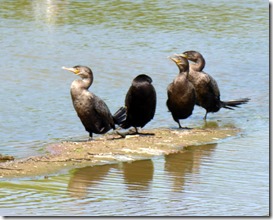 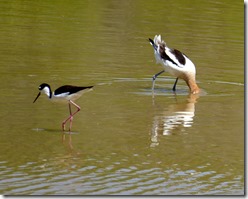 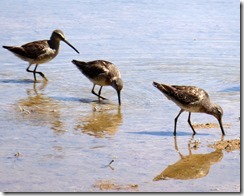 This place fascinates us because it seems so out  of place in this urban desert setting.  There are always lots of  things to watch including birders with sophisticated listening devices and cameras along with young mothers with children in tow watching for the numerous bunnies.

Sedona: Chapel of the Holy Cross and Verde Canyon Railroad 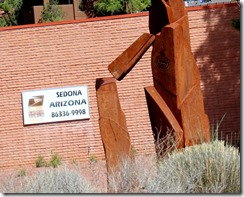 Click here or on the picture  for a slideshow  of our visit to the Sedona area.

Sedona is about a three hour drive from our location in Apache Junction so we were up and on the road by 8:30.  There is only one road north and it was busy on Sunday, March 26, 2017.

The Chapel of the Holy Cross is located just outside of Sedona.  The red rock formations are beautiful which is why local rancher and sculptor Marguerite Brunswig Staude decided to build the Chapel in Sedona when, due to WWII, she was unable to build it in Budapest Hungary.

Staude was inspired to build the Chapel by the 1932 newly constructed Empire State Building.  She was helped in her project at different times  by Lloyd Wright, son of Frank Lloyd Wright and Senator Barry Goldwater who helped her get permission to build on government held ground.

It is written that Staude flew over the area and the spot where it is constructed just come to her as the place  the chapel should be built.  There are  stones in the background of the pictures in the slideshow that some think look like the three wise men or perhaps nuns kneeling.

I’ll just say at the beginning that, for me,  the Verde Canyon Railroad excursion is well worth the time (four hours) and money.  The cost approaches $90 a piece for 1st class, which included a light meal.  Drinks were offered and were not overpriced.  As you will see from the pictures, there is an outdoor car as well as comfortable indoor seating.

The railroad began as a way to get the rich copper discovered in Jerome Arizona out to the rest of the world.   At first the ore was carried out by wagon load over the rugged terrain.  Over the years rail transportation came into the area which enabled the copper to be transported more readily and made the area even more profitable  After several owners and an up and down copper market,  Mr. John Bell eventually purchased the line.  When he rode the first time, he felt the beautiful scenery should be shared and eventually it became the popular tourist attraction of today.

As a side note, as the train leaves the station at Clarksville, it passes through the old slag dump.  Slag is part of the wast material from the copper smelter built to service the Jerome mine.  It is now a hard mass that covers 40 acres and is 40 feet deep.  A company has purchased this slag mass for millions and we were told the gold and other precious minerals that will eventually be removed will be worth billions.

The entire train excursion is exciting for its scenery along the Verde River and also for the history which is shared by the help aboard the train.  When we arrived at Perkinsville, the engine is unhitched from the front and moved to the caboose end.  During this 20 minute change, we learned even more history of the area including the fact that scenes from the movie “How the West Was Won” was filmed  at Perkinsville. Our day was filled with  western history and gorgeous sights.