We left Petersburg Campground Monday morning.  The rain and cool weather of Sunday cleared.  However, smoke from the Georgia, South Carolina and North Carolina mountain wildfires lingered all day.  As we moved north and east from the Augusta area, the smoke was bad enough it made our eyes burn.

The Savannah Valley Trail, as many of the rails to trails, are on the beds of railroads used in the 1800s and early 1900s to transport passengers and goods.   The Savannah Valley Railroad connected travelers and goods to Anderson and Charleston South Carolina.  At the lower portion of the trail where we started, the ride was rough with a lot of tree roots.  We enjoyed the trip, though.  We did not drive between the lower and upper portion—it will be nice when the trail is connected.

This is called a Whistle Post.  They are more than 120 years old and their codes told the engineers what whistle warnings to blow and when. 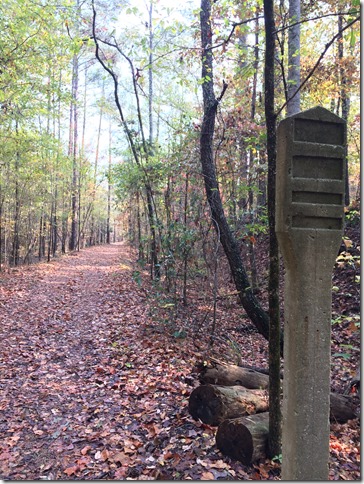 This is an old spring house just off the trail.  I have to admit it was more than a little spooky with the water inside. 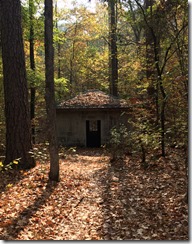 The Doodle Trail is a 7 and half mile rails to trail between the cities of Easley and Pickens South Carolina.  It was named “Doodle” because the Freight engine could not be turned around and had to run backwards from Easley to Pickens looking like a doodlebug. 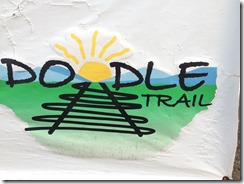 It was built in 1898 and actually ran until 2013, hauling a wide variety of commodities between the cities.  It is a paved, well cared for trail.  Dan didn’t ride this one so he dropped me off and picked me up at the end.  Here is an example of an abandoned mill along the trail—an example of past manufacturing in the area. 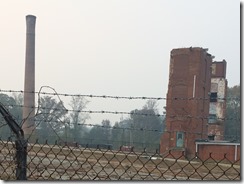 One reason we like traveling in the PW is the bathroom we carry with us.  This day, we were particularly glad we didn’t have to use this roadside facility. 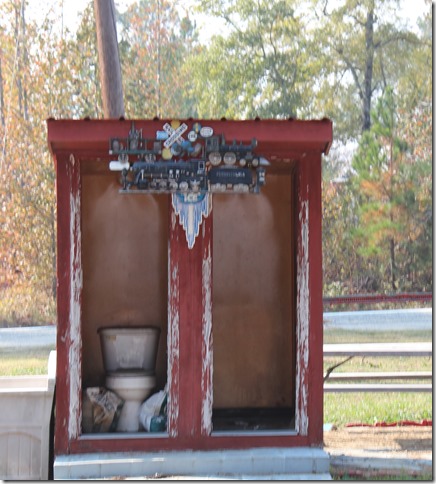 “Head of the South” Augusta Georgia

Regattas are exciting, colorful and fun.  We enjoyed attending Kim and Marc’s meets when they were at KSU.  Now, we have the exciting opportunity to see Aaron and Adam row for Triange Rowing Club based here in the Cary, Raleigh area.
The trip to Augusta was uneventful other than once again encountering a massive traffic jam in Nashville.  (We have bad traffic luck in that city).  I worried about Atlanta, but with seven lanes and hitting it at nonpeak time, we sailed right through.
The regatta was Saturday but we arrived at the site on Friday late afternoon. We rode our bicycles around the area taking in all the activities.  Teams and boats were streaming in.  Amazingly, we found the boys. 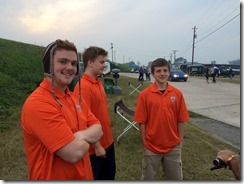 The location was not on the Savannah River itself, but a side canel.
After asking around, no one seemed to care if we just stayed where we were parked behind the dike.  So, we just closed the curtains and spent the night. 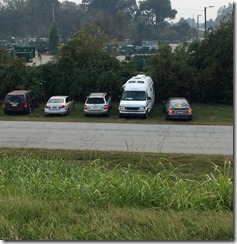 Kim, Marc and Evan found us early the next morning and we set up our little part of the hill side for the day.  I’ve posted a slideshow of pictures taken during the day.  As usual, click on this link  then on the upper right hand arrow for a full screen slide show of the pictures.
By the way, the boys placed fifth out of 15 entries of Novice eight.  Of course, they would of liked to place higher, but felt good about how their race went. 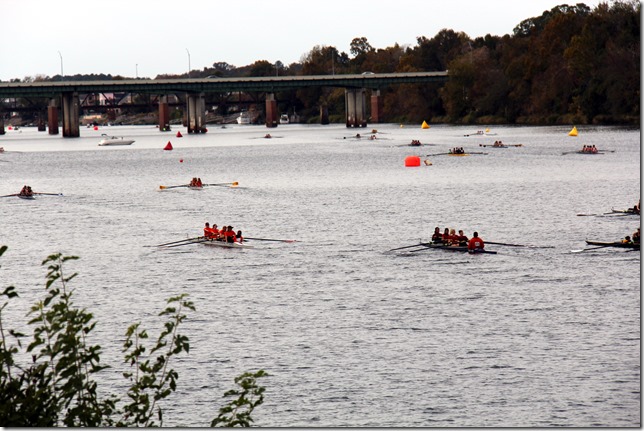