They were only home from their 4th of July visit a couple weeks when I received a call from Kim.  Kim and Evan were using some airline points and coming home the weekend of October 15th and landscaping our house.  Then, we got a call from Doug, saying he was coming home to help.  So, the crew was set up—Kim, Evan (who is on break from his year-around school year), Doug, Dan and I.

First, we were able to get a big load of fill dirt from a neighbor.   It was essential to re-slope the dirt away from the house.  Then it was off to the store to buy plants. 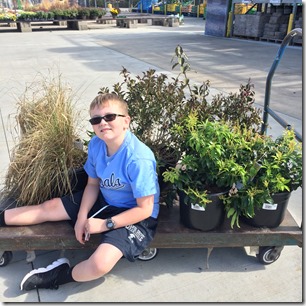 This was only the beginning.  We made two trips—one with a trailer to get the plants home.  Then there was another trip with the dump trailer just for mulch.

Kim, Evan and Doug are crazy workers and had the metal edging down in no time. 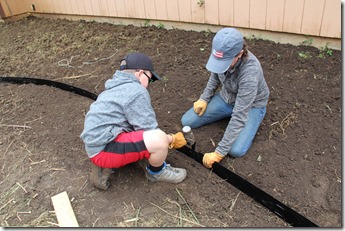 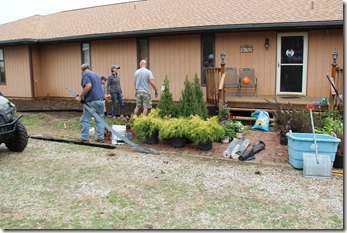 Then digging holes to set the plants.  Once again we were grateful for young hands and muscles because we dug one hole to their three. 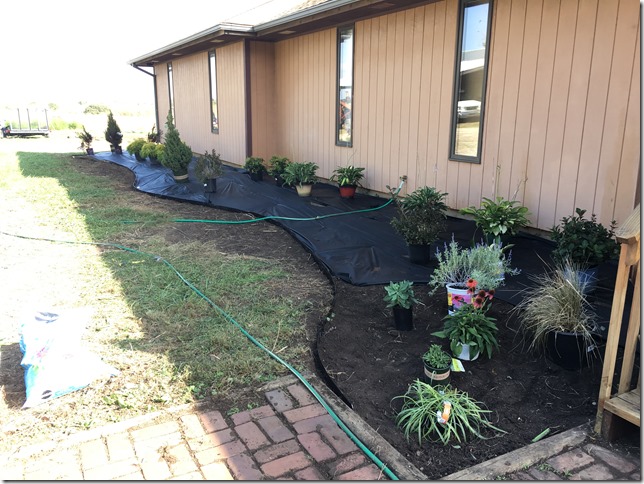 This tells the story: 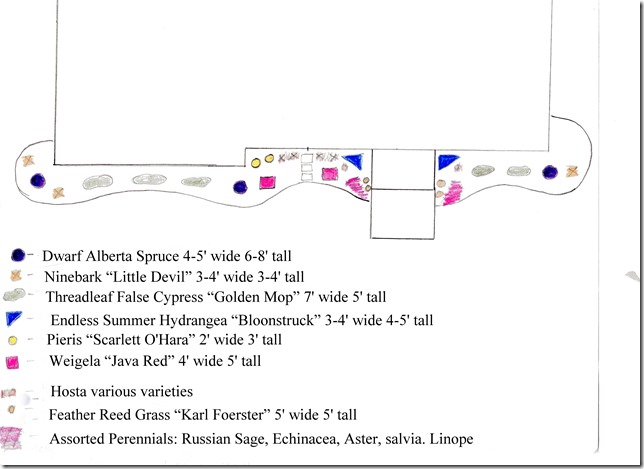 Finally, there is what we call Evan’s Rock.  The kids hauled landscaping blocks from in front of the house and arranged them around the big granite rock in our front yard.  We hauled in dirt from our corn field.   It is entirely perennials and Evan planted all the plants.   I don’t have a picture right now but will insert it when I get it from Kim.  What that picture won’t show is that all the plants there are doing great, but there are little corn plants popping up all around the bed!

So, my job now is to keep everything watered.  It’s tedious because I try to let the water slowly flow so it soaks better with less runoff.  We have many (like a dozen) 5 gallon buckets with tiny holes at the very bottom side.  We have used them before to water new plantings.  I think we are going to set them up tomorrow.  It is much easier to fill a bucket then time the water—plus I have a better idea of how much I am putting on.

There is a phase three.  We’ve been working on it the past two days.  It involves paint!  I won’t post a final picture until that part is done.

There has to be a beginning to this story. And, here it is: 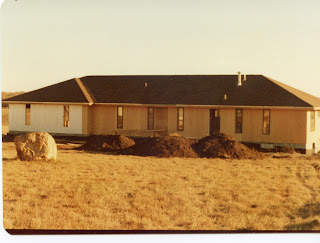 This picture was taken in November, 1978.  We were living in an RV while building most of this house ourselves.  The black dirt in front looks good.  Dan remembers we got it from the pasture where we built a small pond.

A landscaping company in Topeka made a plan for free if we purchased our plants from them.  It wasn't too original, but the price was right.  This picture was taken last year.  Definitely the 37-year-old plants are overgrown.  Obviously the dirt has settled around the house as well. 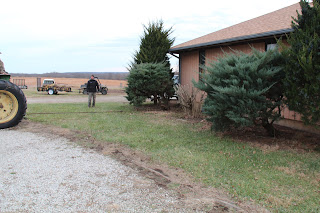 So, last Christmas, we said goodbye.  Dan said he would not miss treating the cedars for bag worms.  I will not miss pruning.