Just looking at the pets posted on Facebook today makes me miss our dogs.  We currently don’t have a dog.  The first time in years, we made the decision not to get one because we are gone too much.

Early on we had a poodle—this picture was taken in April, 1966, two months before we were married.  Nicky was a mess—always barking.  Never wanted a Poodle again. 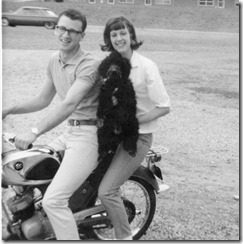 We had another Nicky when the kids were little.  She was a mix breed.  Our neighbor had chickens.  We were warned that she had killed one.  Nicky was impossible to keep penned up.  She disappeared.

We had an English Pointer hunting dog, Jill.  She had puppies that were precious.  I had a picture, but can’t find it right now.  Might have to add it later.

I can’t remember exactly how it came about, but two different times, we were given a Collie from a local breeder.    They were males and for some reason, they could not be used to breed.  They were the most beautiful dogs.  Here is a picture of one of them.  I think this is Shekel. The other dog was named Ruff.  (These dogs came with names) 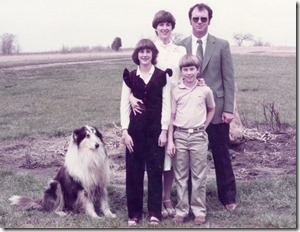 At some point, we got a female collie mix, Lady.  It’s hard to know which picture to post of Lady—I have so many.

Here she is with the kids 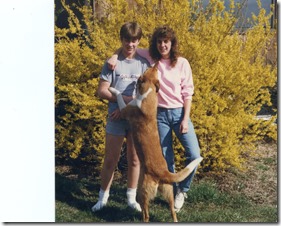 We let her have a litter of puppies—just once. But, oh my were they cute. 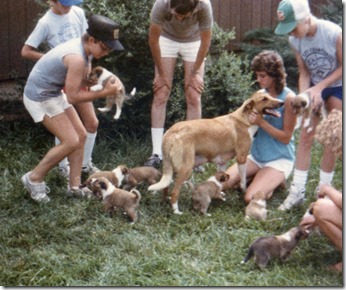 We bred Lady with a full blood Collie and that is why the puppy we kept, Bear, looked so much like a Collie. 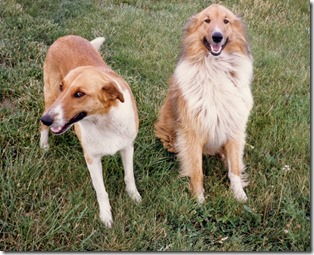 During this time, we were given an English Setter.  She had broken a leg and they set it stiff.  We called her Bobby because that’s the way she got around.  She was a sweetheart.  She disappeared one day and we think she just couldn’t out run a coyote. Then, there was Lucy.  Lucy was a Beagle.  What a case she was.  I remember the day Dan came home and I met him at the door bawling because Lucy had disappeared.  Well, little did I know she would disappear the rest of her long life with us.  She would be gone and pretty soon we would hear that familiar Beagle sound when she had a rabbit on the run.  Toward the end of her life, we think one bunny just sit down there in the woods and played with her.  She got a little fat and couldn’t move too fast. 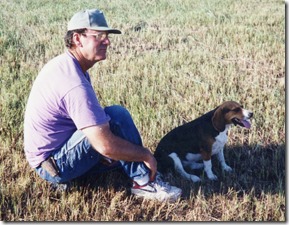 Finally, there was Skye.  We still get teary talking about her.   She was Dan’s companion.  We still miss her.  And, despite what our kids said, she was smart. 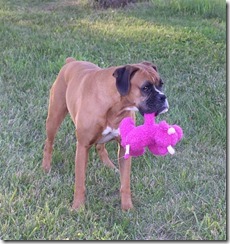 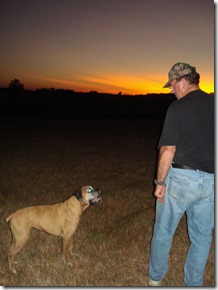 The area is bordered by the Grand Mesa on the south and by large plateau formations, including the Bookcliffs along the north side.  Grand Junction  is the largest city in the valley.

If you Google the region, the result will be locations of wineries and orchards, which is why we made the trip from Vail.

Our first stop was Palisade.  We had our picnic lunch so we just wanted to find a shady location in a peach orchard.  That we did with juicy ripe peaches and cherries. 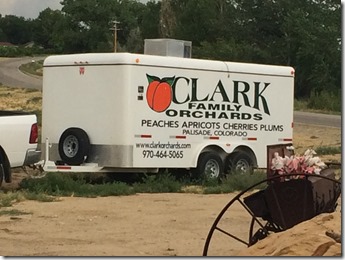 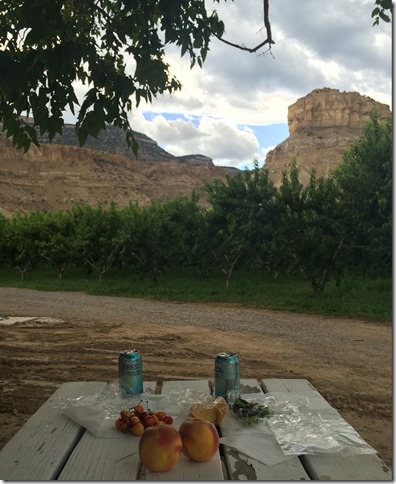 From the orchard, we headed to Two Rivers Winery, our kids’ favorite.  We spent a lot of time over our (free) generous tasting.  It is a beautiful venue and exceptional wine.  No one seemed in a hurry and neither were we.  Sometimes a winery visit can be like that—an inviting place where guests are treated as just that.  It probably helped that we did a little Christmas shopping.

Next, we unloaded our bikes at the Botanical Gardens, which to my disappointment was closed on Mondays.  Still it was a good place to park to catch the Colorado Riverfront Trail which follows the river for 22 miles through the Grand Valley.  We didn’t ride the entire trail but enjoyed all that we covered, including interpretative signs about the region and how it was formed. 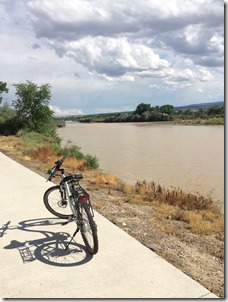 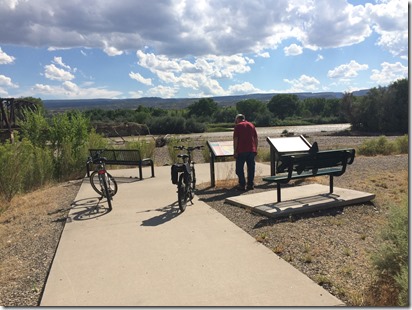 No one gets thirsty on the trail! 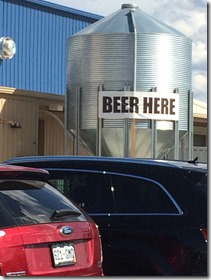 We brought home a large box of peaches.  We ate, shared and ate some more of those juicy peaches.  I finally froze three or four to empty the box.  In all of that box, not one spoiled.  Definitely money well spent. 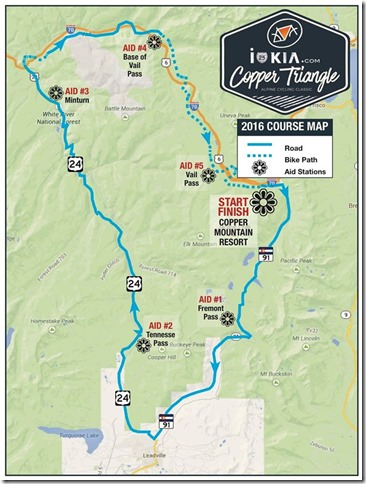 Doug & Drue left around 6:00 Saturday morning and were back by 1:30 or 2:00 pm.  Actually, Doug has completed this ride two other times.  Marc even rode several years ago.  I can’t get my head around it, but there were many there who looked like they could be our age!

Doug & Drue were tired, but cleaned up and were ready to venture over to Copper Mountain for their post ride food & drink.  We tagged along. 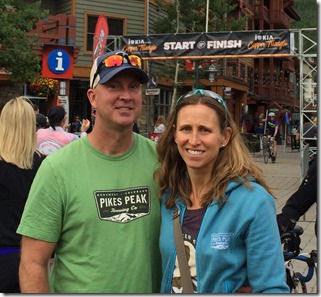 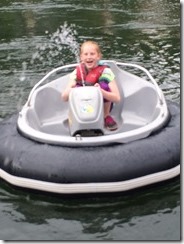 More about the Grand Valley tomorrow.