Sunday at the Lake

The regatta yesterday was fun, exciting and beautiful.  But, the cool, damp air did not help the head cold I’ve been battling since I left home.  So, we hung out at the Jordan Lake Poplar Point campground until late afternoon when everyone came out for a picnic.

We were not able to get our favorite camping spot, but this one still presented us with a beautiful sunset.  We couldn’t connect with fish this time.  Good thing we didn’t plan a fish fry.

The evening was just cool enough that the fire felt good. 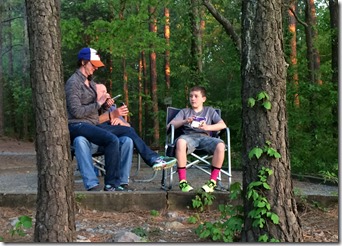 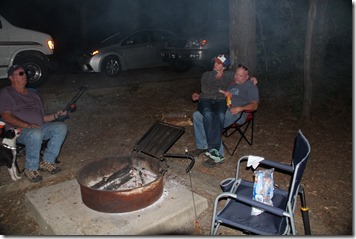 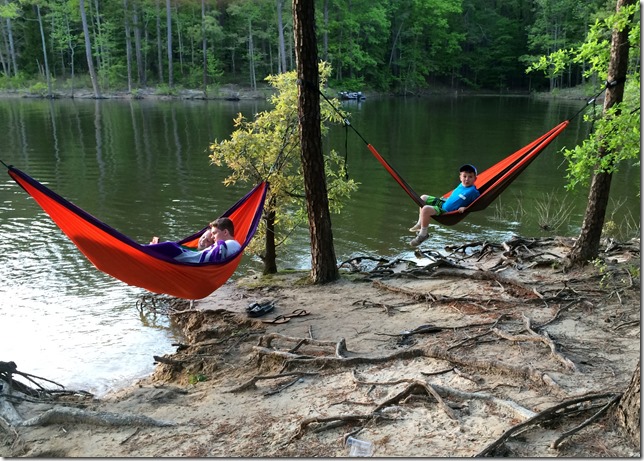 It’s been about 25 years since we watched Kim row for Kansas State Crew.  Attending her regattas was always fun.  Adam now rows in a boat of eight for Triangle Rowing Club.

The event started early and it was held at High Point, but we were there and ready for the day. 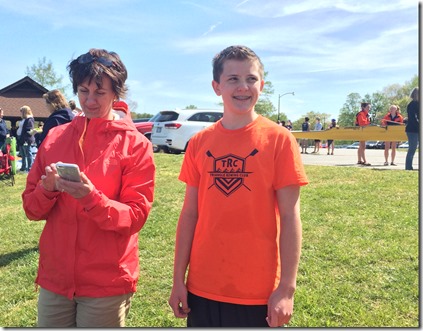 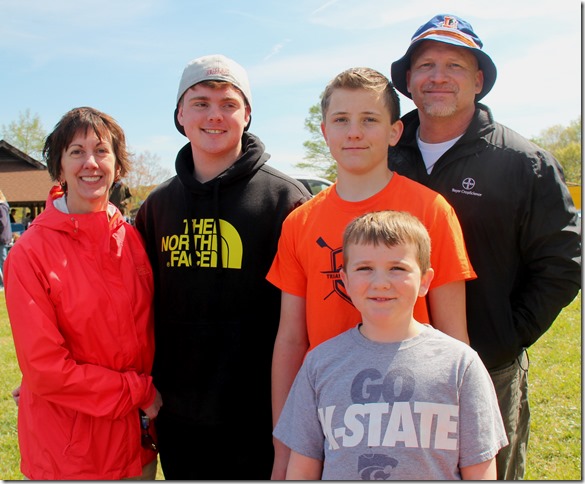 This is Adam in his winning shell 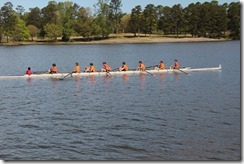 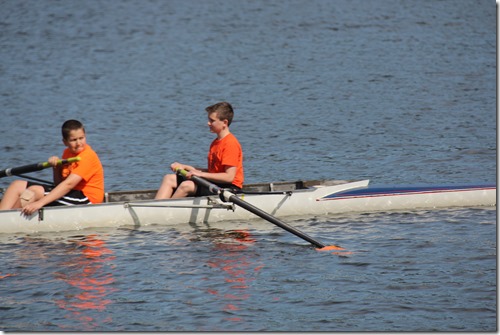 In a press release on the TRC web site, the coach said he was proud of his middle school crew members because they won all their races!

Regattas are fun events.  People were grilling and just hanging out and cheering on the teams.

There was a drone there videoing all the races.  Of course, Dan was fascinated with the concept.  The operater could watch a screen on his remote control to see what the camera on the drone was videoing.  Here is a composite video of the day.  If you are quick, you will see Kim, Marc, JoJo (their Boston Terrier) Dan and me.  The link is in case this embedded one doesn’t show up on your screen.

Dan and I decided to take Evan to the North Carolina Zoo while everyone else in the family was working on Friday.

The Zoological Park is on 500 acres in the Uwharrie Mountains in central NC.  (Asheboro, not Ashville) It is an open zoo with no small concrete cages.  Animals are in natural habitats with five miles of hiking trails joining the exhibits.  Thankfully, there were trolleys to hop on and off, although the best views are on the paths.  It was a warm, sunny day with flowers in bloom and trees for shade. Many of the animals were traditional zoo but fun to watch them in open areas.

The Lemurs were being introduced into a new exhibit.  I wasn’t familiar with the Lemur, but Evan knew immediately about them because of King Julien XIII in the Madagascar movies.  We learned they are not related to monkeys, cannot hang by their long tails and are native only to Madagascar. 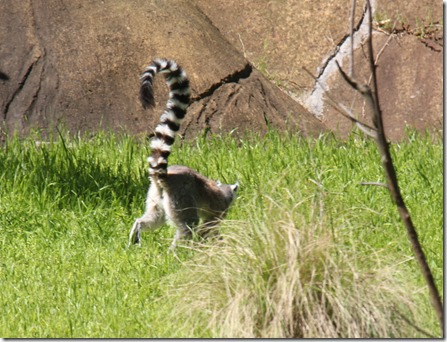 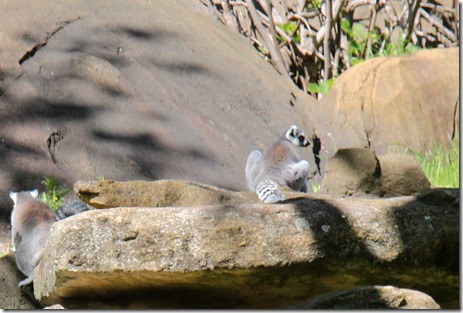 The Polar Bears are the “main attraction” right now at the zoo.  Nikita, a male from the Kansas City Zoo, was introduced in March to Anana, the zoo’s resident female.  It is breeding season so lots of hope for a baby bear in November or December.  Polar Bears are threatened with only 60 in captivity and a 50% mortality among babies born.  The exhibit was awesome, with a cold indoor area.  The pool had underwater viewing, but the bears were more interested in each other than swimming. 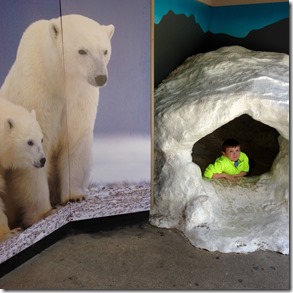 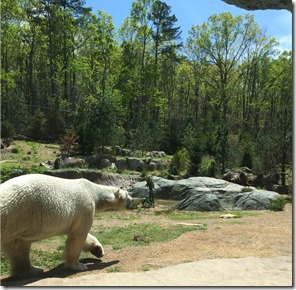 Evan and Dan by the always interesting Pink Flamingos. 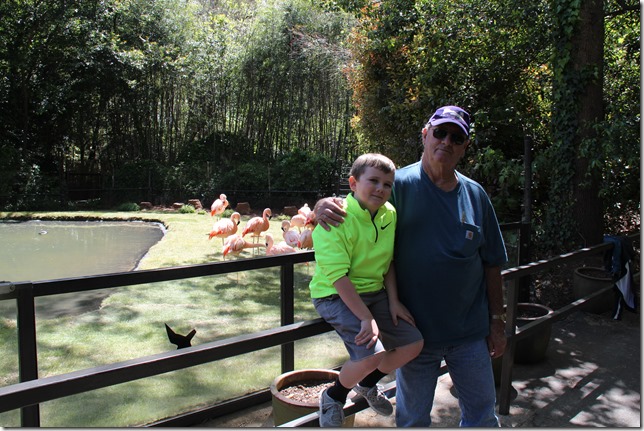 Evan making friends with a chimp. 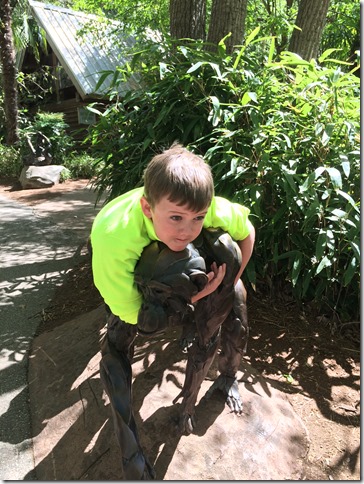 We each enjoyed a slice of surprisingly delicious pizza and Evan had a soft drink in a bear  cup. 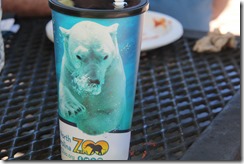 Evan took this picture of me—looks like I’m being attacked by a plant! 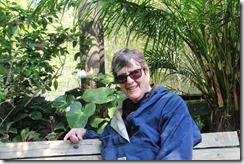 Fun day.  We headed back to our camp spot at Jordan Lake State Park early because tomorrow is Adam’s Regatta.

First,  a quick note about our overnight stay in Knoxville. We pretty much stopped and dropped at 9:30 pm.  First, though, a quick trip into the store to pick up a few things for breakfast. When we got back, there was a car parked a few spaces away. As we walked by, Dan noticed  a lady with a small child in the car. We didn't think much about it until the next morning when the car and its occupants were still there.   Maybe she felt a little more secure with us parked nearby. We put a little gas money under her wiper on our way out.  Who knows the story in a situation like that, but it tugs at the heart.

We rolled into Cary NC right at 5:40 PM.  We made a wrong decision in deciding to veer off I40 onto Hwy 64 too early and hit the one stoplight in every small town along the way. We forget there are way more small towns in eastern states than here in Kansas. With our off-the-interstate-wanderings we made the trip in 2 1/2 days. It should be around an 18 hour trip--our kids have done it without stopping!

Things were rolling along in the Hoobler family with school, work and sports. There was time before grilling the burgers to see Kim's Cary clinic. For living in such a big metropolitan area, she feels fortunate to be working so close to home. Aaron is recovering nicely from his knee surgery. Adam was off practicing with his rowing crew. Evan is out of school on his year around school rotation and Marc is always busy at work.

On Thursday April 14, Dan and Kim worked at figuring out how to enhance storage in her laundry room while Evan and I tried once again to find "The Evil One" geocache  located near their home. I posted on the Geocache site  that we could not find it and that we thought it was stolen the last time we were there and the owner of the Cache emailed me to say to try again because she had just checked and it was in fact there. Well, six months later and we still couldn’t find it.  (We were later  put to shame when Dan looked for only a few minutes and scored)

It sure is nice to just hang out with the family. We are treated to wonderful meals and conversation which we miss so much with our kids all living away.

It was late when we drycamped in the Walmart parking lot in Chester Illinois.  We noticed there was semi traffic nearby but assumed we must be by a high traffic road.  Usually, that type of noise settles down in the wee hours of the morning—not this time. I don’t usually sleep well the first night out and those trucks were going by all night. The next morning we discovered the reason.  There was a large barge on the Mississippi  that appeared to be taking on grain (probably all night).  There were six or so grain trucks in a line at a dock and it was right down the road from where we were parked.

We continued on south and east but took a break by stopping by the Kentucky welcome center to score a state geocache.  Dan agreed to help so it wouldn’t take so long.  Here we were, walking around the welcome center with the GPS.  We began to notice we had an audience.  Turns out, the help there all knew where it was and it became a game of hot and cold.  Finally found it behind this sign.  By the way, the Whitehaven Welcome Center is in a beautiful old mansion.  Worth a stop if down that way. 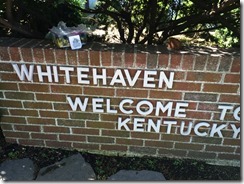 Then it was on to Clarksville, Tennessee where we decided to stop at a little restaurant for lunch.  We discussed that knew there was a song about Clarksville but just couldn’t come up with it.  Finally, Google came to the rescue—Last Train to Clarksville by the Monkees, 1966.  Clarksville is near Ft Campbell, KY and the song is about a man meeting his girlfriend there before leaving for Vietnam.  (We were married in 1966 so know this was 50 years ago)

Then it was on to just outside of Nashville TN where we once again rode the Cumberland River Bicentennial Rail to Trail.  We rode a portion of it before, now we’ve ridden the entire length.  It was a sunny, spring day and this is a beautiful trail.  Wildflowers abound along a gently flowing Cumberland River. 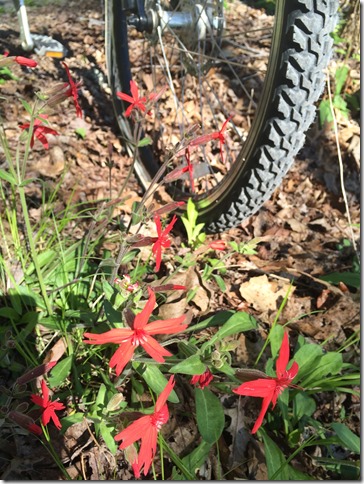 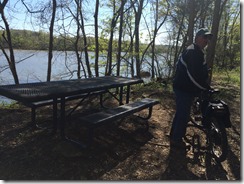 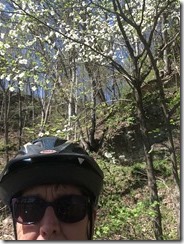 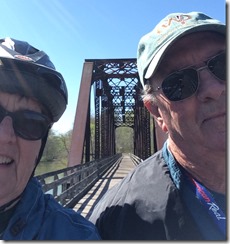 Found a quiet Walmart outside of Knoxville that allowed overnight parking.  Tomorrow finally to our distination and family.

Dan and I took off yet again in April.  This time to North Carolina for two weeks.  I am backdating the posts about the trip.

I’ve spent a week—off and on—getting ready for this trip.  Of course, we had to get the taxes done.  I also wanted to get my garden planted as well.  We also needed to get all the burning done on the pastures.  By Monday morning, April 11th, all chores were completed and the PW dewinterized for the second time this year.

A little late start of 11:40 AM, but beat the goal of getting away by noon.  We decided to take the two lane back roads going east.  Cruising along just outside of Sedalia MO, the PW started missing out.  Nothing makes a heart sink like a machanical failure on a roadtrip.

As we drove down mainstreet Sadelia, there was the sign we were relieved to see, Rick Ball Ford.  Without hesitation, we turned in.  They were very accomodating and helpful.  It was an electrical situation.  In one hour and 45 minutes, we drove out only $340 poorer.  We were just glad it was fixed so no complaints.

Skadalled from behind the 8 ball in Tipton MO 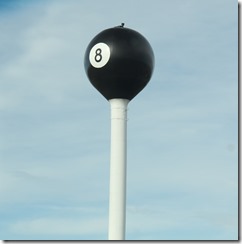 Cruised right past Popcorn Buddha in Linn MO only because popcorn doesn’t always agree.  Wished we would have stopped just because of the awesome name.

We finally ran out of light and dropped anchor at a Walmart in Chester Illinois, just south of St. Genevieve MO.  Both are nice Mississippi River towns that we like to explore, but on a mission to get to Nashville to ride bikes at a good time tomorrow.  .