As a board member of Douglas Rural Water #3, Dan has the opportunity to attend the convention each year.    Since this is the 50th year since the establishment of Kansas Rural Water,  we were glad we were a part of the celebration. 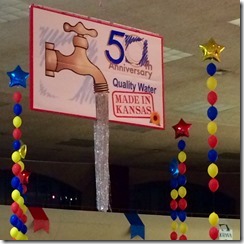 What is a convention without drawings for prizes and there were a bunch.  But, as usual, we did not come home with one.  However, two couples we know well each won two items!  How great is that, especially when one of the gifts was a hand pieced quilt.

Dan attended the break out sessions each time they were offered.  I went with him, except the spouses had a special afternoon Wednesday.  We visited the Museum of World Treasurers located in the downtown area of Wichita.  As I understand, local collectors came together to form these galleries of treasures from around the world.   This is an eclectic, almost quirky museum and I found it extremely interesting.

The evening entertainment was an adaption of the Broadway Lend Me a Tenor by Ken Ludwig presented by The Forum Theatre.  This was laugh-out-loud funny and professionally presented.

There were a few interesting facts that I thought I would share:

The Ogallala Aquifer is depleting at an alarming rate.  Many farmers find their wells actually drying up in the Garden City area.  Rex Buchanan of the Kansas Geological Survey gave the presentation at the closing session.  He and his staff have checked the health of numerous wells over the aquifer for many years and he had a map which showed  there are very few areas that are not affected.  This underground water was established when Rome was built Buchanan said.  It is not replaceable.

This blog is like an old friend. One that I owe a call. The more I think about the fact that I haven’t written, the more I feel like I don’t know what to say because I’m such a slacker.

Anyway, tonight I decided to just get in here and write…

It has been a busy month.  We started out the month cutting, clearing and picking up a hedgerow.  Those of you familiar with hedge know the branches will start growing almost sideways in order to get light.  They have to be cut so tractors—or anything for that matter—can drive under or even close to the trees.  Given that we aren’t as young as we used to be, this ended up taking longer than we thought.  What we accomplished looks good, but it really never ends with hedge.  The brome is growing, so we are done for now.  We still have a huge pile of these branches to burn and missed out on a chance for a safe fire when it snowed last week.

The reason we missed burning when it snowed is because we made a flying trip to Colorado.  Trent and Carly were here over their spring break and we took them home—actually leaving a week ago tomorrow.  While they stayed with us, we were able to talk them into picking up rocks that were “flipped” out of the field when our neighbor ran over it with a rotary harrow.  Carly found something under one of the rocks… 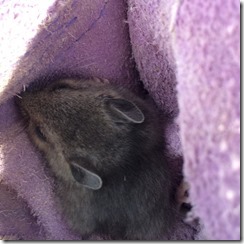 We enjoyed a spring snow storm in Colorado even though we missed the one here.   It was beautiful for a day.  By the time we left on Sunday, the roads were clear. 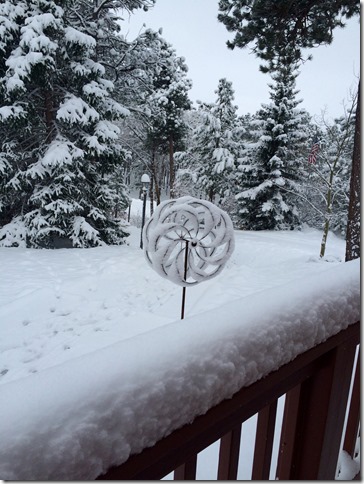 The little red Corolla racked up more miles this week with the 50th State Water Convention in Wichita for three days.  I’ll put that on a different post because I even took some notes that I thought might be interesting if anyone out there is still checking in….