No surprise that we woke up again to sunshine and coffee.  Only this time we promised to meet Lynn at Gold Canyon UMC at 8:00 am.  And, we are leaving for home from the church so all had to be packed up and ready to go.  This morning there was no lingering with our coffee watching the sun slip up from behind Superstition Mountain.

The Pastor was giving the third in his series of sermons about violence in the Bible.  We were glad we made the effort.  Not only was the message appropriate for our times, we were privileged to hear a beautiful rendition of “How Great Thou Art” with organ, bell choir, brass ensemble, string ensemble, men’s quartet and full choir.

Following the service, it is a goodbye to Lynn and on the road with a destination of Ute Lake State Park, just north of Tucumcari New Mexico—610 miles.  We made it, although we parked in the dark.  We have stayed at this state park at least three other times because it is a perfect half way stop.  And, it is only $10 a night including electricity.  The lake was beautiful in the morning light but no tarrying because we were headed home.

Route 54 angles northeast through Texas and Oklahoma.  Dan agreed to help me add three states to my Geocaching List on the way home.  What more perfect route to add three states within three hours.

The first geo stop was in New Mexico, into a pasture on a dirt road for about a mile.  There we found a cache in the OBAR cemetery dedicated to the early settlers, ranchers and railroad workers who developed the area.  There was a fence around the cemetery, but it looked to be almost totally abandoned.  The town of OBAR was only indicated by a sign with no sign of buildings.  A very interesting place to nab a NM cache. 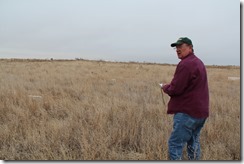 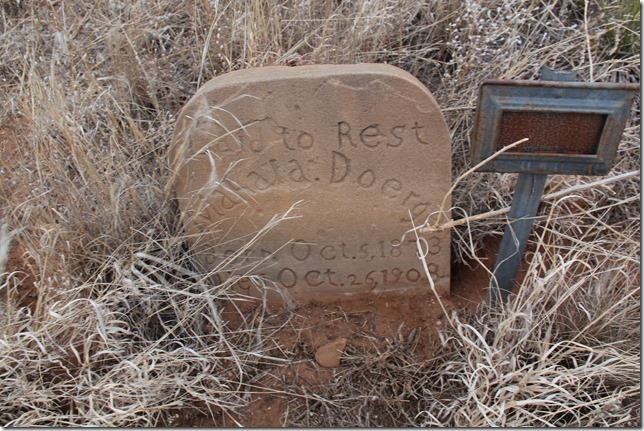 Continuing on Hwy 54 we entered feed lot territory in Texas.  These lots are huge beyond description.  It was in the midst of these feed lots that a grotto built by a Mr. Hunt was located right along the road.    In 1959 he traveled to Europe and was impressed that every so often someone would build a grotto for travelers.  When he returned home he decided  to build a grotto for travelers traveling on Hwy 54.  So, in a freezing wind, with semi traffic zooming by, Dan patiently waited as I finally found the clever cache. 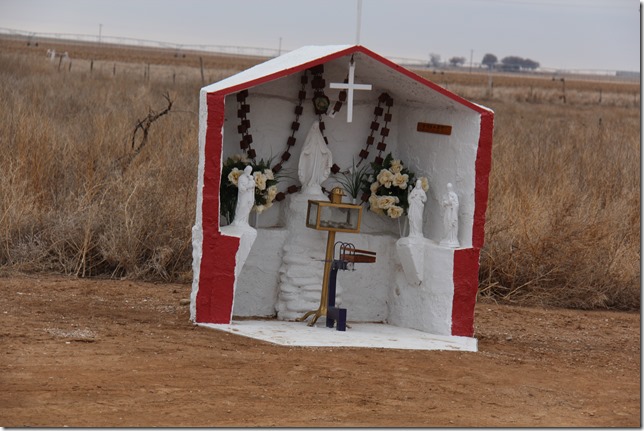 Next Oklahoma.  I knew I was stretching my luck so I settled for a easy find as we entered the state.  It was a good thing, because the wind was getting colder as we traveled north.

Home around 7:30 pm.  The forecast said lows only in the 40s so we didn’t have to winterize in the dark.  But, with both of us ready to move around after two days of driving, we emptied the PW, leaving only the final cleanup and drain the water system for the next morning.

Once again, a great trip to the southwest.