We returned to our campsite at Lost Dutchman tonight around 10:00 pm after playing cards with Kay and Lynn.  Dan decided to look around outside before bed.

Here is what he saw 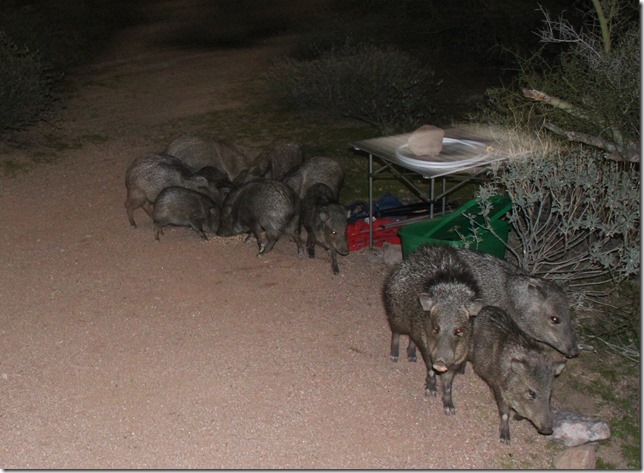 Well, not exactly what we used to have around home although they sure sounded like it.  They are javelina which are not members of wild pig family but of the peccary family, a group of hoofed mammals originating from South America.  According to the Arizona Wildlife and Parks web site, they have only recently arrived in Arizona.

Anyone who knows Dan will know that this crazy visit made his day.  Obviously, they have made a visit to the campground before because they moved on from our site to a trash can which they tipped over.  Probably not a good way to impress the camp hosts.

Here is another clue they aren’t too afraid of humans 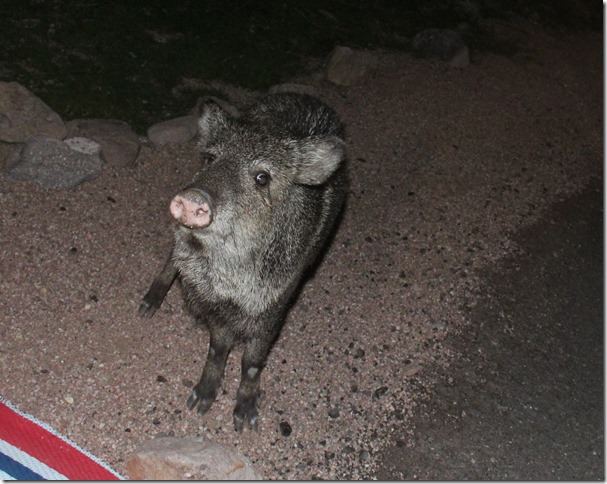 Today we visited the Water Ranch and Raparian Preserve located in Gilbert Arizona, which is also a suburb of Phoenix.  In my attempt to find bicycle trails other than on busy streets and along the canals, this area came up.  It turned out to be a great one.

What is a “Water Ranch?”  In the 80s and 90s, the town of Gilbert decided to set aside 110 acres, 70 of which make up seven basins that are filled in a rotating basis.  Not only has this made an excellent habitat for 298 species of birds counted since the Ranch was established, but it is a place where water is allowed to perculate down to be recycled in to the subterranean reservoir for future use.

There are over four miles of trails within the Ranch and Preserve and bikes are allowed.  We spent three hours riding and viewing humingbirds, honey bees, herons, quail, songbirds and various species of ducks and geese. We spotted an owl which, according to the pamphlet, is rare.   Seeing all of our summer birds in January was just so fascinating to us.  The real attention stealers were the bunnies.  They were peeking out all over.

This is the only picture I took since I opted not to carry my heavy camera. 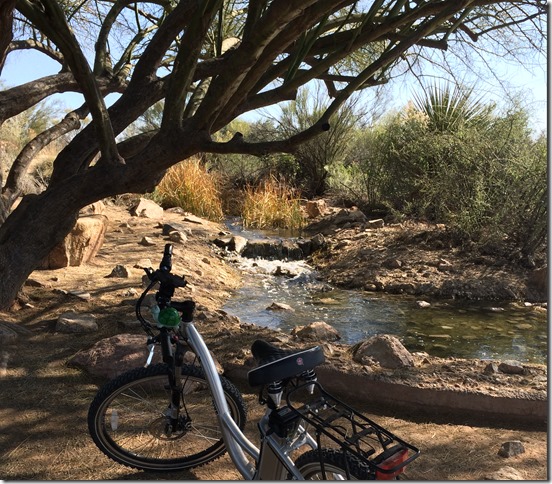 The high temperature today was 70 degrees.  We thought of our friends at church on the snow removal detail.  And, for a short time, felt a little guilty.

It was good to see Kay and Lynn.  They are friends from before we were married so feel like they are family.  We are looking forward to spending time with them while we are here.  Actually we know at least four couples total who either live or are spending time through the winter.

We have already enjoyed four of these off Kay & Lynn’s tree.  The trees are loaded with oranges all over. 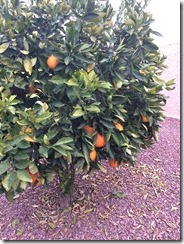 We love our camp spot at Lost Dutchman State Park.  We have a  beautiful view of the Superstition Mountains with no homes or other campers obstructing.  There is one small drawback—there are no hookups on the sites.  We find this to be no big deal because staying off the grid is how we like to roll.  However, since we do have a generator on board, we would like to use it now and then.  Most of the time it fires up at the touch of a button.  Sometimes not.  After studying the manual and forums online, we are sure what part we need.  So, today it was off to Tempe where we were told the part would be available. Well, it wasn’t, but they ordered & it will be here in a couple days.

Since we were out with the bikes, we decided to ride one of the canal trails that are all around the area. 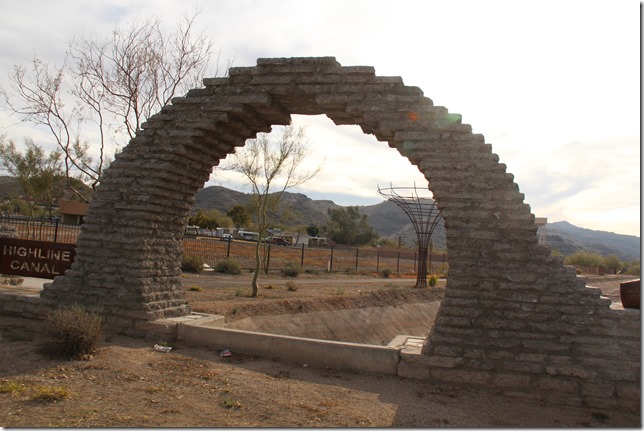 This was the entrance to the Highland Canal Trail.  We rode the entire trail which was a total of ten miles.  It was an interesting ride because we rode by two parks, upper end homes down and even a little part had a rural feel.  There was a little too much gang writing on part of it, but it was a bright sunny day and we didn’t feel threatened.  There were lots of geocaches along the route.  Dan and I decided to try to use the GPS and learn how it works.  It was fun to have him help me and enjoy it.  Finding geocaches aren’t high on his list, but today we worked together successfully!

Yes, we are here. Maybe this time we’ll find that treasure on Superstition Mountain. 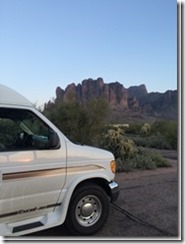 We arrived late Friday afternoon after a day of sleet, snow, rain, drastic altitude change and finally sunshine and 60 degrees.

As usual, we never leave as planned.  So, instead of Wednesday morning, we locked and rolled around 2:00 pm.  Dan had a shop he wanted to visit near Winfield.  Thinking of Grandpa Hanney and his Cherokee Strip adventure, we headed to Perry Oklahoma to spend the night.  We should know by now that trying to find a campground after dark is never a good thing.  But, after going about five miles the wrong way, we pulled into a nice spot with electricity to plug in our little heater to brave the lower 40’s.

Thursday’s drive was mostly uneventful as we moved through Oklahoma, northwest Texas and on into Albuquerque.  I had a rail to trail along the Rio Grande in Albuquerque that interested me.  It had high reviews.    Once again, we didn’t arrive until after dark so we were trying to figure out where we would spend the night instead of riding bikes.  The Sandia Resort and Casino had food so we headed there, ate and just made up the bed and slept.  I might have slept a little better because I put $20 into the Flaming Seven slot and walked away with $22.  Dan sat and watched basketball with a bottle of water.  There were lots of dollars rolling there but not from us.

We elected to go south out of Albuquerque and across New Mexico on Hwy 60.  As it turns out it was a wise decision because the Holbrook route would have taken us through a big snow storm.

Route 60 did not disappoint.  First there was this:

Then, all of a sudden, Dan screeched to a halt and we did a turnaround  because he said he saw an eagle.  Turns out, he did! 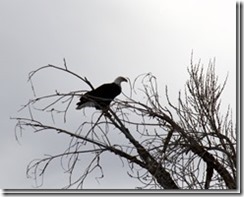 And, do you think this sign was for or against wolves. 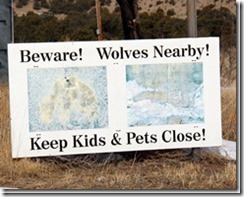 The drive between SloLow and Globe Arizona is beautiful.  Here is a picture, but it is so much more than this.  For sheer drop offs, hairpin curves and mountain vistas, it rivals Colorado. 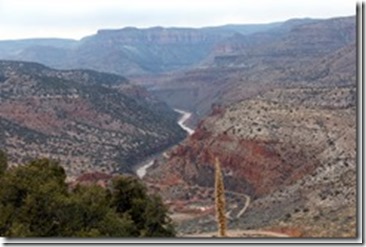 So, like I said, here we are.  Today is Sunday as I write this.  We attended the beautiful Gold Canyon UMC, grilled burgers and finally caught up on a little sleep and this  journal.  We’re here for a while.  Tune in!