As I write this, we are parked in a beautiful camp spot by Jordan Lake North Carolina—only about 15 minutes from Kim, Marc, Aaron, Adam and Evan’s house. We’ve been here two days and already saw two football games. But, more about that later.

We left for North Carolina Monday afternoon, arriving at our usual first night destination of Mt. Vernon, Illinois. The next day I planned a side trip to the Dawkins Line Rail Trail in eastern Kentucky. And, we made to the trail head in time for a short ride and then watch a beautiful sun set with a glass of wine. 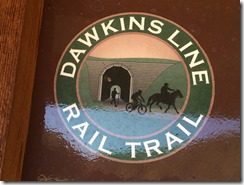 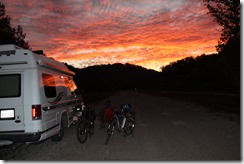 The Dawkins Line rail road was originally owned by the Dawkins Lumber company.  Later, the train was used to carry coal.  Kentucky is proud of the trail now completed.  It has a prominent place on their State Park brochure.  There will be an additional portion opened within a year that will include another even longer tunnel.

Since we intended to ride much further up the trail the next morning, we just rolled down the shades and spent the night. There were several moments of wondering if we did the right thing. I forgot to say the trail head was up a valley and remote. So, when a rather loud pickup truck drove by and shown a spot light over the PW, not once, but twice, we were a little concerned. Then when it went by the third time, we told ourselves it was low enforcement and they were just checking that we were OK.

There was a little fog over the valley when we woke, but the sun crept over the top of the hills and it was a beautiful clear day. We still had the area to ourselves. However, once we got on the trail, within one mile we passed by, or I should say behind, homes and businesses. When people were out, they were friendly.

The tunnel was long and dark in the middle. I still can’t figure out what happened, but I think I was a little disoriented by the dark and then hit some rough ground. Anyway, I ended up running into the wall of the tunnel! Thank goodness no injury, except to my ego. I know I will have a head lamp the next time I ride into a dark space.

Even though we were not at the peak of color, the trees were starting to turn so it was a  beautiful ride and drive. 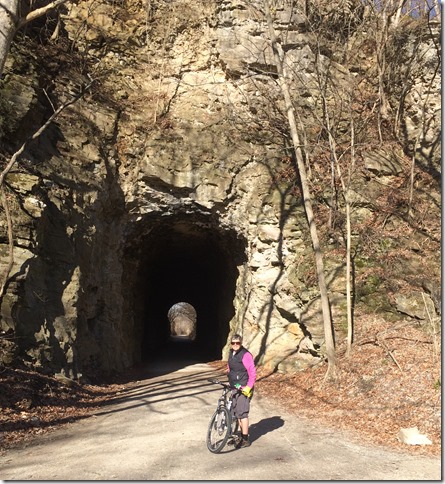 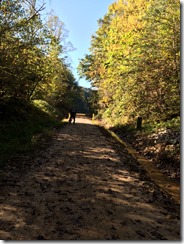 We were probably a week early for full aspen color, but still the Alvarado Campground was a beautiful destination.  It is located on the eastern slope of the San Isabel Mountain range.

Friday morning, I woke to a bright glow coming in our window.  I grabbed the camera and was barely able to capture the beautiful morning light. 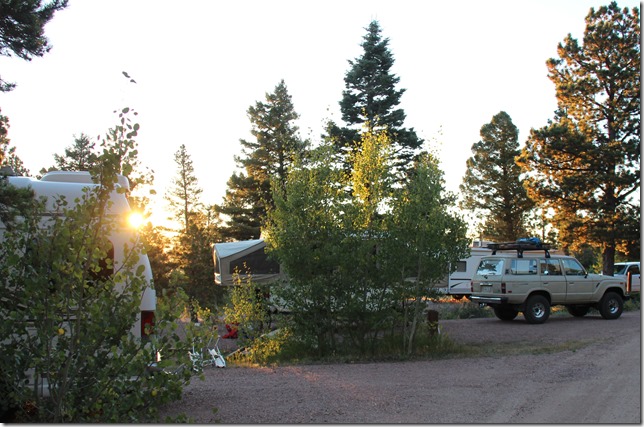 Doug has the cast iron cooking down to a science.  Drue and I mixed up the ingredients and in no time we were dipping in to this goodness. 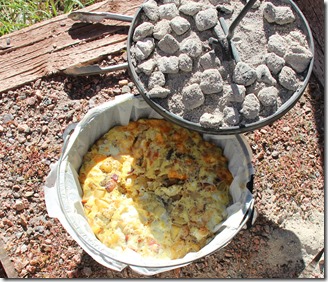 The guys took off for the Westcliff to fill a propane bottle and we girls took off for the mountains.  It was a beautiful trek up through trees and streams.  Gunner loved the water and Eve had to take in all the smells.  And, I found a geocache.  Carly got some good pictures—I should have hers on here instead of mine. 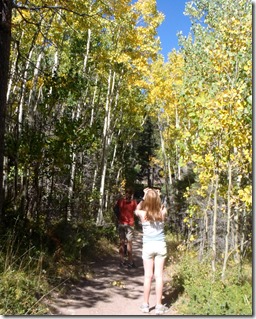 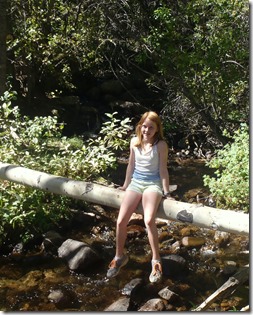 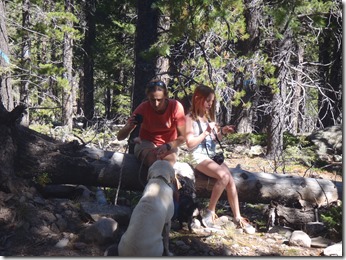 We were ready for the roaring fire which we built up after cooking steaks over the coals earlier.   We discovered a tiny bit of left over cheese cake was delicious in with the chocolate and marshmallows in our smores for dessert.

The next morning we were up early—so were the dogs.  We know that because someone cracked open the PW door and they “slipped” in.  I wonder who it was that let them in…. 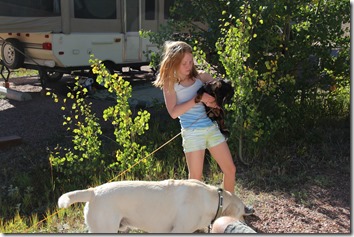 Doug and Drue headed back home because they had tickets to the Monument Beer Festival.  The rest of us headed to Bishop’s Castle.

Bishop’s Castle was a lifelong project by one man with some help from his son.   This massive structure is hand made out of stone and iron.  Jim Bishop purchased the land near Rye Colorado in 1959 at the age of 15.  The castle grew over his lifetime to what it is now—a real castle, full of intrigue.  Mr. Bishop has strong convictions and the disagreements with the State of Colorado over his castle are made clear with handwritten signs on the property.

Since Mr. Bishop was a welder by trade, I had to believe the globe where I stood to take Trent and Carly’s picture in the tower is secure even though it swayed in the wind and whenever I moved.  Without the kids cheering me on, I am not sure I would have made it up there.

Click here or on the picture.  When the Smug Mug web site comes up, click on slideshow in the upper right hand corner.  It might help you appreciate Mr. Bishop’s dream. 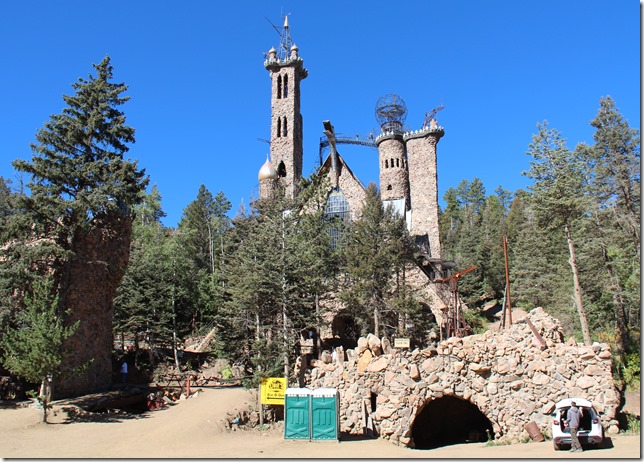 Our fall trip to Colorado most generally falls around the middle of the month.  It is the time of Doug’s birthday but it is also a beautiful time to visit the area.

We timed our arrival to watch Trent play in his junior high football game.  The weather was perfect and his team won.  We were excited to find out there was another game on Thursday evening—a bonus.

We managed a birthday “cheese”cake for Doug’s birthday.  Oops—no candles. 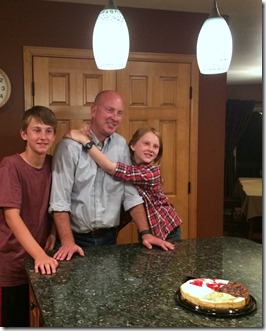 On Thursday, Dan and I rode a part of the Santa Fe Rail to Trail near their house in Monument while everyone was busy with their day.  This is a popular trail and well maintained.  We thoroughly enjoyed our ride from Monument to Palmer Lake and back.  This picture was taken at the shelter at Palmer Lake where took a little break. 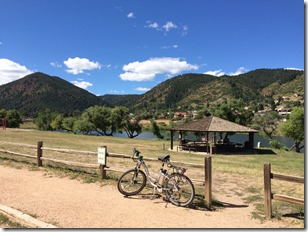 Thursday morning we left early for the Alvarado Campground near Westcliff Colorado,  located in the San Isabel National Forest.  The rest of the family would come after work and school.  Since it was just the two of us, we stopped by the Arkansas City River Walk trail near Canon City.  We started at the east end of the trail and rode the seven miles into the city and back.  It was a beautiful trail that runs along the Arkansas River most of the way.  This was taken on one of the three bridges over the river. 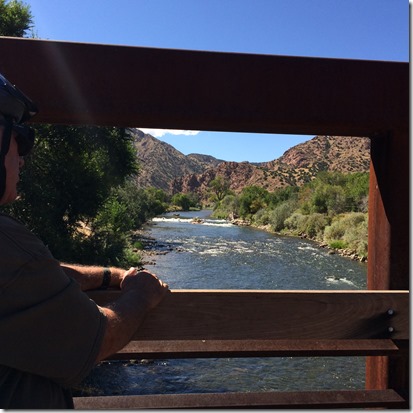 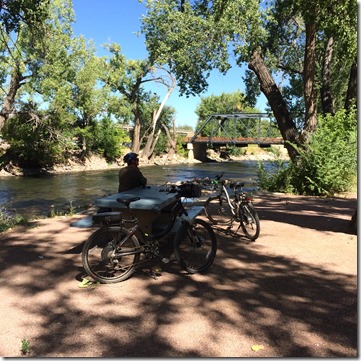 A great spot to relax by the river.

It is late so I will tell more about our beautiful camp spot and Bishop’s Castle tomorrow.