It’s a wonder this little groundhog didn’t cause an accident.  We came upon a car stopped on the road somewhere in west central Iowa.  We stopped behind and Dan helped do a good deed for the day.  One happy groundhog! 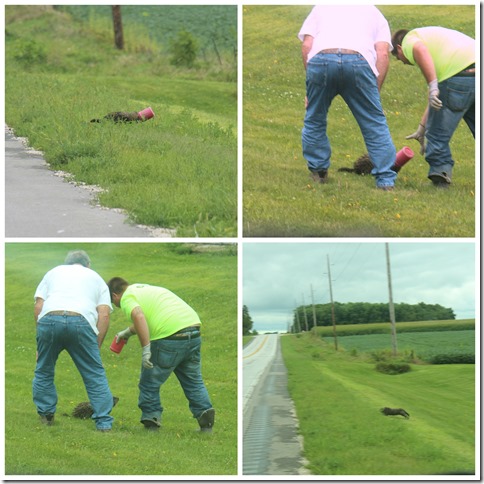 The good Samaritan said he was from the state of Arkansas which might explain why he thought the poor creature was a porcupine.  And, it did look a little like that because it had been raining and its fur was sticking up.   I am sure there are plentiful porcupines in Arkansas, but doubt any have found their way up to Iowa.

Dumb me—I should have captured a movie of this exciting situation.

The Western Trails Historic Center is located just off I 80 immediately before crossing the Missouri River in Council Bluffs—actually the same exit as the casinos only south.  The Trails Center was built by the National Park Service and operated by the Iowa Historical Society.  It has a short movie about the trails leading west.  Most of these movies are excellent, but this one was a bit confusing.  However, definitely still worth viewing.  The exhibits were informative and contained a lot of visual examples.

Another bonus of visiting the Historic Center is that it is an excellent place to jump on the Iowa Riverfront Trail.  (If the Western Trail Center gates are closed the river front trail can be accessed at the casinos).   This seven mile route runs along the Missouri River for most of the route.  There is a short part through an industrial area, but it is easy to follow.  It also goes by a casino, a golf course and a nice riverside park.  The highlight, though, is the Bob Kerrey Pedestrian Bridge across the Missouri River linking Iowa to Nebraska.  It opened in 2008.

Of course, I love bridges and this was a great one.  It has a modern “S” design with cables.  We rode our bikes across it but, since we were there around the lunch hour, there were more walkers and runners.  It is actually fairly low compared to the I 80 bridge down the way.  The Missouri was up with all the rain so I thought it was pretty thrilling to stop at the pull off places and enjoy the river below and the Omaha skyline to the west. 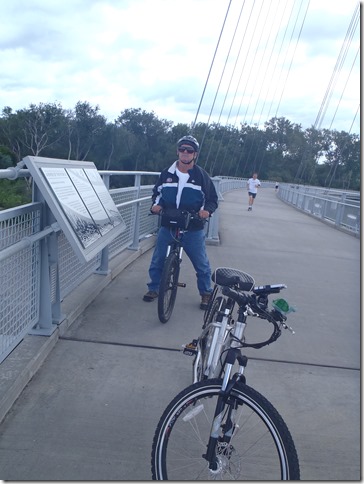 Once across the bridge we rode around the Omaha side to a small lake with a trail around it.  It would have been nice to be able to link to the Old Market area of Omaha which was not far away.  However, it would have required street riding and we try to avoid that.

There is a statue commemorating the steel workers on the Nebraska side.  Dan is showing how high the water was in 2011.  We had forgotten about that flooding event. This picture makes me laugh… 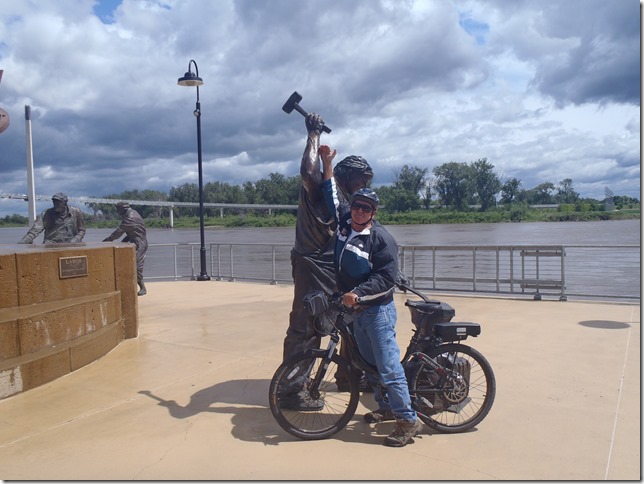 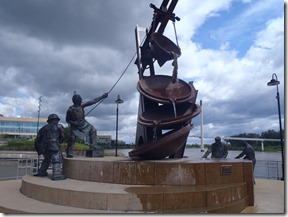 There is a Lake Manawa State Park in Council Bluffs that has a trail around the lake and links to this trail.  Another time I think we would do that.  Maybe because it was a beautiful day, but I wasn’t ready for the 16 mile round trip ride to be over.  Probably because I knew, from the Trail Center, it was straight home.

We were only gone for three days, but it was a great little road trip.  There will be one more post.  Just some observations.

The Loess (rhymes with bus) Hills are located along the east side of the Missouri River valley in Iowa.  They are visible from I 29 and anyone traveling on that road will see them rising off to the east.

What is not obvious unless experiencing the Loess Hills National Scenic Byway is that these hills are formed entirely by deposits of fine windblown soil.  We learned we would have to travel to China to find larger but similar loess formations.  The hills are 200 miles long and are 15 miles wide at their widest.

This view of a road cutout shows how the same dirt is throughout the hill. 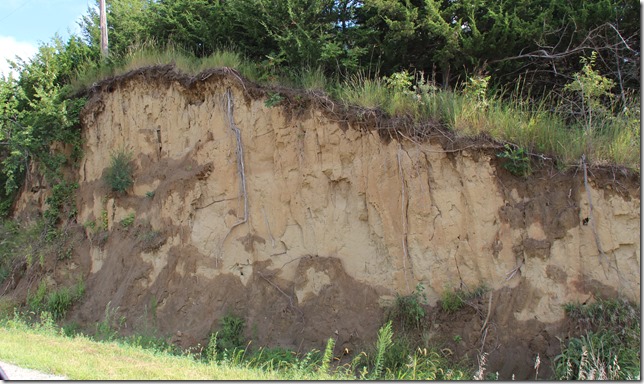 We started the National byway just below Sioux City and ended at Council Bluffs.  We took the Smokey Hollow Loop, the Wilderness Loop and the Orchard Ridge Loop.  The loops were 10 to 12 mile routes up into the Hills, giving us a feel for the interior hills.

We bypassed a information center by entering the byway at midpoint.  When we finally did stop toward the end of our drive, we found a very informative booklet that told mile by mile attractions and directions.  So, if you explore the Hills, be sure to pick one up before you start.  We missed a couple wineries and vineyards.  That is unacceptable.

We did explore the Preparation Canyon State Park, ultimately spending the night there.  I am not sure when we have stayed at a more quiet location.  Almost eerie.  We enjoyed a late meal of lasagna baked in the portable outdoor oven that heats by sitting on a stove.  Thankfully, we had wine with us despite missing the one nearby. 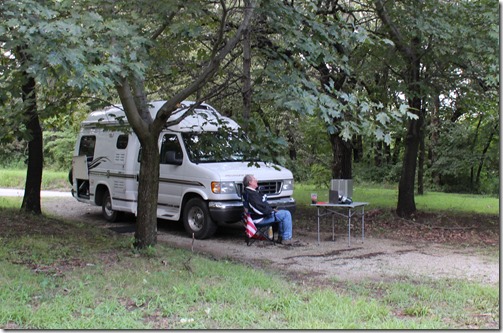 Preparation Canyon State Park has an interesting story.   I’ll quote, “A group of Mormons rested here in 1853 to prepare for continuing their journey to Utah, but they left the church to follow a charismatic leader who they later discovered was a swindler.”  Other information explained the leader talked the followers into turning over the deeds to land they settled when he found the value of the fertile soil.  When they discovered what had happened, the settlers set out to hang the “leader” but he escaped.  At some point, those who remained were able to get their land back.  The state park sits on land that was, at least in part, donated to the State for the park by the family of an original settler.

There are hiking trails that would be beautiful in the fall in Preparation Canyon and would be worth a return visit.  It was in this area that I remembered I hadn’t tried for one geocache.  So, I set about rectifying that except Dan is the one that finally located it.  I wish he enjoyed finding geocaches more because we would be an awesome team.

This picture is a good example of the wave affect of the blowing dust that created the Hills. 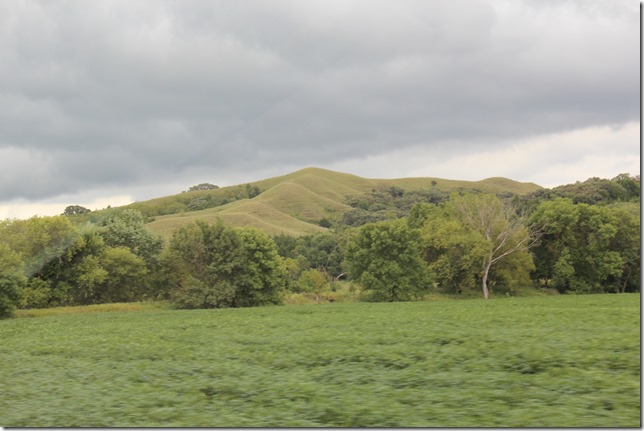 I guess farmers don’t care if this rich, deep soil erodes because here is how the corn—and there is a lot of corn in the hills—is planted.

This field had a type of terracing that we saw often in Iowa.  Maybe it works better when there is deeper top soil.  These, obviously, are soy beans. 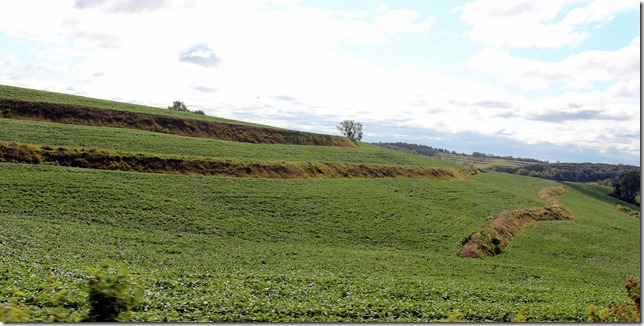 After spending the night in these quiet hills, we headed back to Council Bluffs to see if we can complete the ride we were rained out on Monday.  That is tomorrow.

Grotto of the Redemption

The morning light at Ledges State Park was gray.  Forecast was more rain on the way.  We were looking forward to visiting the “ledges” but it was not to be.  The gate was closed to the area—high water.  Another time for the first state park in Iowa.

I had at least three other possible trail rides circled on our map, but riding in the rain was not our plan.  So, it was north to Westbend,  which is only about 50 miles south of the Iowa-Minnesota line and about that same distance from where we were.  Destination, Grotto of the Redemption.

The literature says you must, “Experience the Grotto.”  I would say that is correct.  It is hard to describe.

Father Paul Dobberstein (1872-1954) was extremely interested in rocks.  He traveled all over the United States and World gathering all kinds and sizes of ornamental rocks and gem stones.  He would bring them back to his parish in the small Iowa town of Westbend and set them in concrete.  Following his death, others continued in carrying out Father Dobberstein’s plans. It is the largest man-made grotto in the world.  It is often called the eighth wonder of the world and is valued at over four million dollars.

It is a “composite of nine separate grottos, each portraying a scene in the life of Christ.” For me, though, the scenes were meaningful, but the beautiful stones were breathtaking.    The one grotto portraying Jesus as a baby is made entirely out of petrified wood.  The fact that it was slightly raining only did more to make the rocks sparkle and shine.  The church has a Christmas scene inside using materials that were too precious for the outdoor display including a Brazilian amethyst that weighs over 300 lbs.

I did have to tell myself that the Father gathered his beautiful material at a different time.  He probably would find many of the sites he visited protected now.  Still, being able to visit one place with the variety of stones is awesome.  With the rain, the tour guide was not on site that day.  We visited with someone who had been there before and they said the tour guides are informed about the names of the stones and even tell stories about the gathering trips.  We were sorry to have missed this opportunity.

I will add that, because of the rain, I did not use my good camera.  Consequently I am disappointed in the quality of the pictures.  But, you will get the idea.  Click here or on the picture to go to Smug Mug and then on the upper right hand area for the “slideshow.” 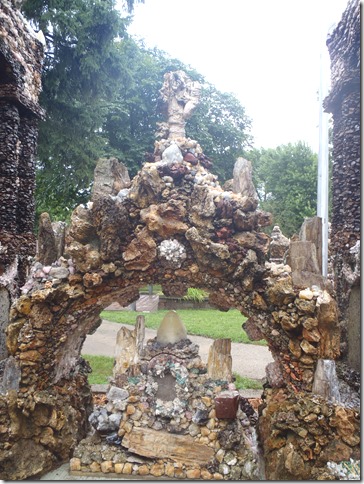