If we would have checked the weather earlier on Monday morning, we would have hurried on up to Council Bluffs for a Trail I’ve been looking forward to for a long time.  As it was, we ate a casual breakfast, didn’t brake any speed limits and pulled into the parking lot in Council Bluffs in rain.

So we took off for Woodward, Iowa which is in the Des Moines/Ames area.  Woodward is no suburb, though.  I saw the town’s slogan somewhere and I thought it was a great one, “Together for a Better Tomorrow.”

We drove out of the earlier rain, but it looked to be headed our way so we found the old depot on the edge of town where the High Trestle Trail starts.  This Rail to Trail is an Iowa State source of pride.  To quote from the literature, “This dramatic trestle is a work of art; a half-mile long, the bridge rises 13 stores, that’s 130 feet and includes scenic overlooks of the valley below.” The name is derived from the 1913 train bridge that spanned the Des Moines River.  There is a lookout and information kiosk on a portion of the original bridge.  That original bridge was replaced by the current Union Pacific Railroad bridge which was then abandoned in 2003 .  With private donations and help from UPRR, the rail to trail including the bridge was opened in 2011. 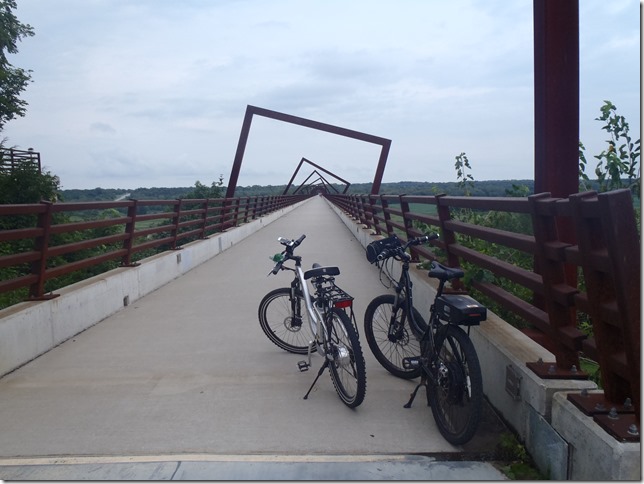 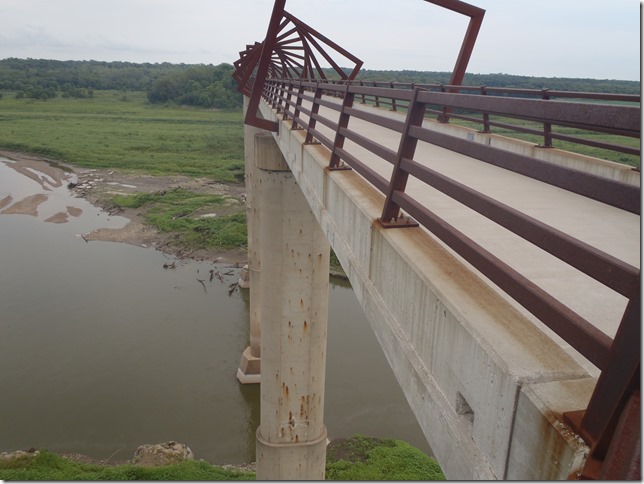 This was an awesome experience to say the least.  I read that at night the artistic covers are lite in a way that when riding under them it gives the impression of going through a light tunnel.  For me, being able to just ride across and stopping at the lookouts was enough.

We continued on the trail to Madrid where we thought we would eat.  Monday mid afternoon is not a good time for small town restaurants.  We finally found a Subway several blocks away from the trail.  Then we got a little lost trying to get back.  We met the Mom with three young girls in town that we had earlier seen out on the bridge.  No problem, go to the post office and then down this narrow slippery dirt trail.  Nothing like local knowledge.

We rode back the way we came, once again enjoying the bridge.  The rain drops started just as we strapped the bikes on the back of the PW.

Here is the bridge from a distance. 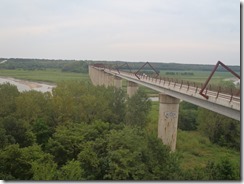 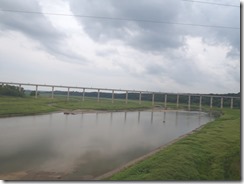 Kim, Marc and family lived in Ames for a while and we always talked about going to the Ledges State Park at Boone.  By the time we arrived there, it was raining in earnest.  So, after a shower in the well maintained bathhouse, we listened to it rain while we watched an hour long show about the Iowa State Fair by the local public radio station.  Tempting to go, but decided to check out the Ledges in the morning and then head to northern Iowa and what some have called the eighth wonder of the world…

We had two goals on our mini road trip.  First, ride Iowa’s famous trail system and second, don’t get hung up on itinerary.

Keeping in mind goal two, I didn’t get upset that we didn’t get away until 4:00 pm Sunday.  We said we would just go as far as daylight takes us.  But, I usually do have some kind of notion of where we might land and  I thought that would be an orchard that allows overnight camping near Nebraska City.  However, when using the Harvest Hosts sites, you must arrive before closing and that wasn’t going to happen.  So, we decided to check out Brownville, Nebraska.  There is a bridge over the Missouri there and a National Historic Landmark.

The Landmark is the Captain Meriwether Lewis, a 250 foot long “dustpan” dredge that labored 24 hours a day up and down the Missouri River from Rulo Nebraska to Sioux City, Iowa starting in 1931. 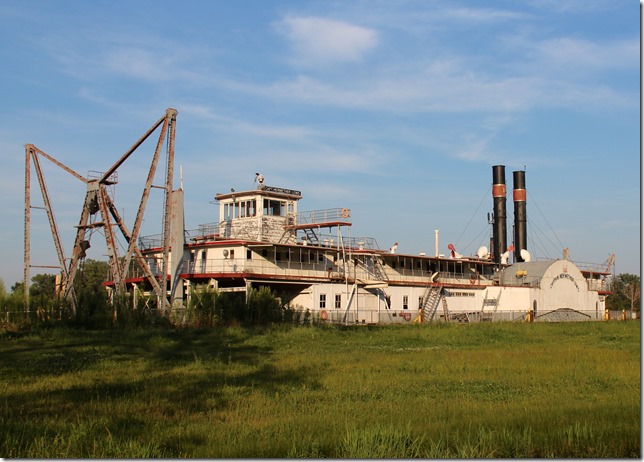 Unfortunately, the museum was not open so we only relied on information nearby for how it worked.  It took a crew of 58 to run the vessel using 6,000 gallons of fuel oil a day.   It would dig to a depth of 20 feet, scooping 200 feet of channel every hour.  It was retired by the Corps of Engineers in 1969 and placed on exhibit in 1981 along the river outside the small town of Brownville.

There is a lot of camp sites nearby, but the area was entirely empty so we just parked the PW in the parking lot where we had a great view of the river and bridge. 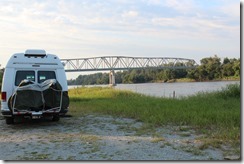 Dan decided he wanted to sit by the river with a little wine.  So, I got on my bike and rode six miles up and back on the Steamboat Trace—a former Burlington Northern rail bed.   I know Dan would enjoy the area, so I am sure we will be back—it is only 130 miles from home.  According to the map, the trail runs from just south of Nebraska City to about a mile south of where we were parked.  The information says Peru Nebraska has a campground near the trail as well.  That would be a good starting point to ride both directions.

The trail ran under the bridge (I do like those bridges) so here’s a shot of that. 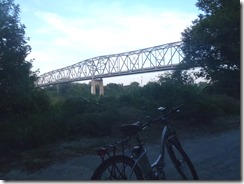 The information says it is a diverse trail.  I believe it as I had just exited a heavily tree lined area right next to the river to this area where crops were growing. 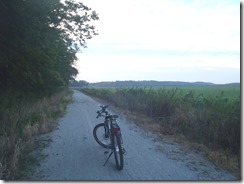 When I got back, there was just enough wine for a glass for me.  Dan had decided we were selling everything and buying a houseboat and explore the rivers.  It was the wine talking—I think….  Anyway, a relaxing evening. 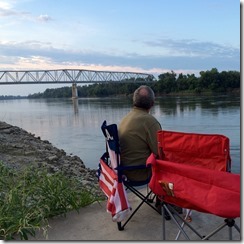 Finally, the mosquitoes drove us inside at dark.  Even with the late start, it was a fun beginning to our little trip.

Tomorrow, you won’t believe this trail is in Iowa.

We think of Nebraska as the “Corn Huskers.”  I even think the Nebraska Capitol building resembles a corn ear.  But, we’ve been in Iowa for a day and there is corn everywhere.   Then there is this 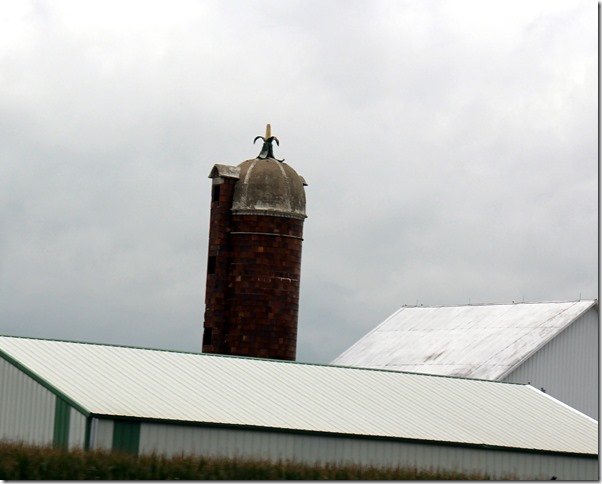 Everyone knows the Iowa State Fair is going on this week.  It is probably one of the best fairs in the Nation.  However, we are not attending.  Tempting, but too many people.

Several weeks ago, Dan suggested we take the PW out for a couple day spin.  I discovered Iowa is not only known for its fair, but also for its Rails to Trails.  That is what we are doing.

So far, I haven’t had cell service except in major towns and interstates.  I’m writing this on Monday evening, but won’t be able to post it until we find a decent connection.  For that reason, I’m going to wait to tell about our stops along with a few pictures.  Give me a couple days—this isn’t a long trip….