Sometimes the timing is just right for a plan to come together.

Drue was planning on coming back to Kansas from Colorado to visit her Dad.  The float trip was a week early this year.  And, we were invited to a 60th birthday party for my cousin who leaves in the Black Forest area near where Doug and Drue live in Colorado

So, that is how the plan came together for Trent and Carly to go with us to the North Fork.

I have to admit there was some consternation on my part.  I follow our Sunburst Ranch camping spot Facebook page and from that, I knew the river has been closed twice this summer because of high water.  Thankfully, my calls to Sunburst were met with assurance that there would be no problems.

And, there weren’t.  The river was about a foot high but that only made the float easier.  We floated right over some of the rocks that usually have to be maneuvered around.

The upside was that each day on the river was absolutely beautiful.  If there was a little bit of a downer, it was that it rained each evening we were there.  The canopy that we intended to be over the picnic table was placed over the kid’s tent just to make sure they stayed dry.  All went well—we just weren’t able to have the campfire chat or crawfish hunt this year.  The last picture in the slideshow shows our drying out program when we got home because everything had to be put away wet then sit back up when we got home to dry.

The first day Carly rode with us in the canoe and Trent had a kayak.  The second day Carly had her own kayak and that was a lot of fun for her.  Both of them were all over the river chatting and exploring.

Here is link to a slide show of our trip.  Click on this link, then “slideshow” in the upper right area.  To explain the video, the kids could walk down from our site and float on life jackets around a bend and through some rapids to the area where we parked our canoes.  The part on the video is actually right where the canoes are parked.

In 2007 Dan and I were returning from visiting our Colorado family when we decided to count Recreational Vehicles on I70.  It was the end of May, Memorial Day weekend.  We started counting at the Kansas State line and ended at Salina—250 miles.

Today, July 27, 2015, we did the same survey while once again returning from visiting our Colorado family.  We started counting at Limon Colorado and ended at Topeka—449 miles. These were our rules:  opposing traffic, anything we could see at interchanges or rest stops that appeared to be stopped a short while (gas stations, etc) and those we passed, making sure we didn’t count them twice when we stopped ourselves. 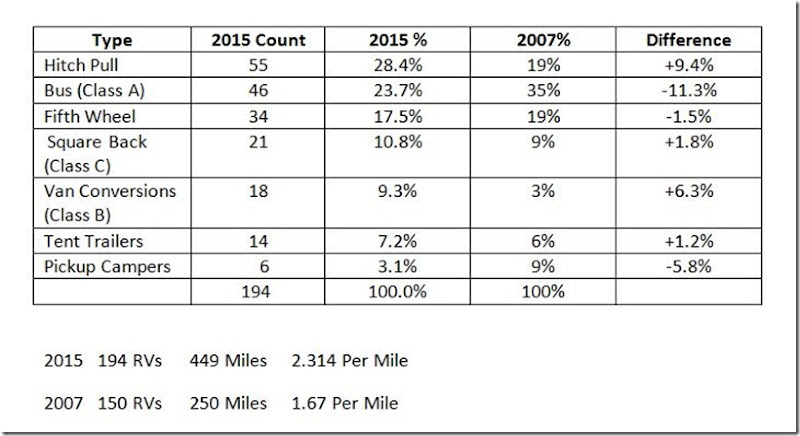 Obviously, there is one column missing.  I do not have the original count from 2007 and the number of RVs per type came out to 1/2 vehicle when I used the percentages.  I decided to just leave that column out—it is close enough.

The blog post I wrote from the 2007 is here.  I mentioned that the price of gas/diesel was not making a difference in choice of type of RVs.  However, I think in the eight years since the last survey, it is making a difference.  The new light weight hitch pull campers seem to be making a significant change in choice of RVs according to our little informal survey.  I didn’t make a breakout count, but definitely there were a significant number of the 14 to 16 foot hitch pull campers similar to the brand name R Pod.

Another big jump was in the Van Conversions—our RV of choice.    It does not surprise me that interest in these have grown because, obviously, the public still likes RVs that put the driver with the passengers (note the  Class A Bus numbers and the Class C square back numbers).  The advantage the Class B, Van conversion is the mileage, which could reach up to 10 miles per gallon better than other RVs of that type. If the buyer likes road trips, that becomes significant.  And, it is not necessary to tow a vehicle behind.

Another observation were the number of vehicles that might be packed to tent camp.  We didn’t count because that is a hard one to call, but honestly if we would have counted the ones we thought looked most likely, it would have ranked right up near the top.  That might be the young married and young families.  Certainly I could understand that with the cost of RVs now days.

Finally, we are at the height of tourist season and the last survey was taken at the very beginning.  But, even with the informality of it all, the percentages do say something about current trends.