We watched the weather from the Phoenix area and decided we could slip north through a window of fairly nice weather Thursday and Friday.  And, we did.

The route is the most direct according to our GPS.  It is Phoenix to Holbrook AZ, then east on I 40 to Tucumcari NM and north, northeast to home.  We stayed in Ute Lake State Park just north of Tucumcari—at least that’s what the sign said, we never saw anything in the daylight—in after dark and gone before sunrise.

We needed to hustle because we wanted to get home before dark so we could unload and re-winterize. We stopped for a few things from the Overbrook grocery store and by the time we got everything unloaded, it was cold enough that  the water from the drained lines in the PW froze on the cement.  That’s cutting it close.  And to think, we were in shirt sleeves only 36 hours before.

I do have a few observations and pictures from the drive home.

Along the highway in Guymon, Oklahoma, there is a drive in theater.  Well, that and a restaurant and RV park.  According to this web site, Eric and Alka Lammes reopened the drive in after it set vacant for 25 years and incorporated an RV park on the land.  How cool would it be to be able to watch a drive in movie from your RV.

Then there is Mullinville, Kansas/ 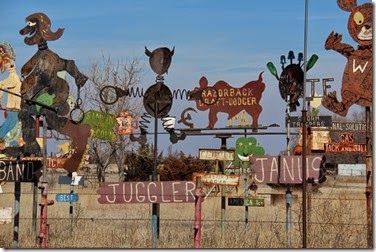 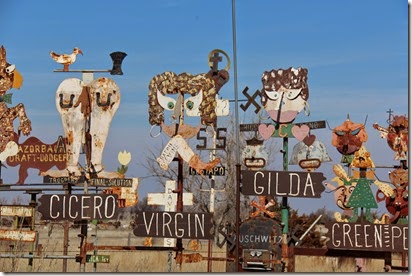 There’s even more on the other side of town.

Read more about Mr. Liggett’s art here.  He is a unique individual.

I’ll step back a couple days for the ATV ride in the Arizona hills in a day or so.

Wait, I thought you were going home

That’s probably what Kay and Lynn said when they got my text that we were still in town.  We thought we were headed home Monday morning and it is Tuesday evening as I write this.

When we checked the weather at Berryton on Sunday evening it said snow and very cold temperatures.  We decided not to brave bad roads and just stay put for a couple more days.

Anyway, we needed a day of rest. Monday was that day.  The only thing we did was go to the new Cabela’s store near the dome where the Super Bowl was played.  That trip made us realize how big this city actually is.

Here we are in this picture telling Kay and Lynn goodbye.  What a good time at their home.  Good food and talk just as it is with old friends.

Here they are in front of their beautiful home

The adventure isn’t over.  Today we visited the mountains up close and personal.