We are out on the road again for a while.  I always look forward to these roadtrips.  We are headed southwest so it makes sense that we would first spend a couple days with our Colorado kids.

We did a rough calculation on the way out and decided there is a chance we’ve made this trip 50 to 60 times.  So, you would think we have seen everything interesting and fun around the Colorado Springs area.  However, there is one place we’ve missed over the years—the mining museum. And it is only about 10 minutes from Monument.

This museum was incorporated in 1970 with the intent of preserving the mining history of Colorado.  That it does very well for the $6 - $8 admission, which includes a tour and a chance to pan for gold.

The tour begins with a walk through a simulated mine tunnel where we were shown how the veins of ore are broken out of the rock and brought up from the ground.

First, it begins with how the men were dropped down into the mines.  Then we were shown the steps in blasting the ore and finally bring the ore back to the surface. Throughout we were reminded how dangerous this whole process was and to some extent still is.  Men lost eyesight and hearing not to mention their lives. Men who work in the mines, especially in the early days of mining,  were brave, strong and fearless.

The second part of the tour we were shown the machines used to crush the ore, to provide power to bring the ore and men up out of the mines and provide air. 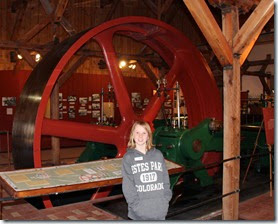 This was just one of them.  It’s hard to capture how  big this flywheel actually was. This part of the tour was interesting because each of the machines actually ran.

After we watched a short movie about the history of mining in Colorado, Trent & Carly panned  their gold—really they both found some tiny gold. 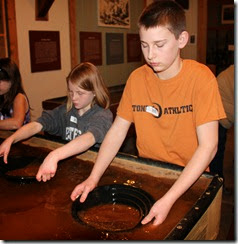 Finally, we were introduced to Nugget and Chism.  They are the two resident burros.  Before steam power, burros were used to pull ore out of the mines.  They were often the only companions of the early gold prospectors. 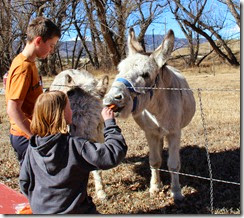 Definitely the Mining Museum should be a destination for anyone in the Colorado Springs area.

Looking for that camera angle 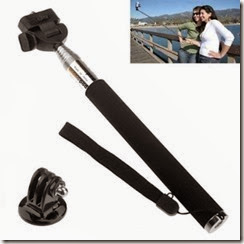 I promised to show my little secret to the picture taken last night. I know, a little hokey.  But, if no one is around to take shot of us in the scenery, you have to admit,  this is the ticket.

Taking pictures of ourselves is not the reason I put out the $8 to purchase this extension, though.  I am excited to try it taking pictures from unusual angles.  How about over a cliff…or out the window…or over the top of a fence!  There are so many possibilities.

My big camera is way too heavy.  I can barely hold my little camera still enough for a good picture.  Maybe it would help if I set the timer for a shorter time.

I can’t wait to try this—I may get an opportunity in the next couple weeks!

Happy Birthday to me!!

It was a great day.  I may be a bit prejudice when it comes to hard copy birthday cards.  It might be due to the fact that it was my job for so many years to bring those little bits of joy to birthday celebrants when they opened their mailbox.  And, I still love getting them.

I will have to admit, though, that it is a lot of fun to find those “Happy Birthday” wishes from Facebook family and friends.  What I like about social media is that it brings those who probably would otherwise never know it is my birthday  back into my life for just this short time.   All those positive thoughts came though to help make this day special.

Tonight neighbors came by for pizza and dessert.  We were glad we didn’t have to get out because it was cold and miserable with the snow today.  In keeping with the trend, here is our selfie—taken with a selfie stick, which I will write about later. 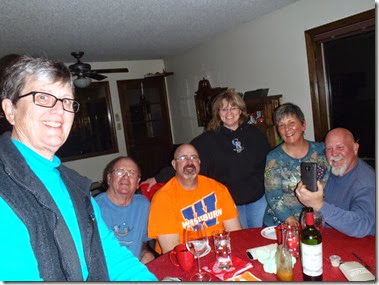