It has been a celebration the past two days.  Two church services, eating out, a reception, Christmas dinner, packages and, tonight, a crash.

We were planning on heading west tomorrow but there is a winter storm warning for the Colby/western Kansas area so we decided to put the trip off one day.  Sure don’t want to spend a night out there because the roads close—been there, done that.

I don’t take as many pictures as I used to on Christmas.  I should document gifts, though.  Today was an example of a reason to do that.  We were trying to decide what year we gave each family a KitchenAid mixer.  I went back to the Christmas pictures and saw a package about the right size in 2001—didn’t see the mixer though.  It was fun to see those little ones opening the baby toys.

As to the pictures, I almost never delete any attempts at family pictures.  They age well.  Sometimes the most poised ones are the least interesting in ten years.  Here is an example of multiple attempts at a family picture today

And, here is the final one that will go in the albums, but won’t Evan love the second from the left in ten years? 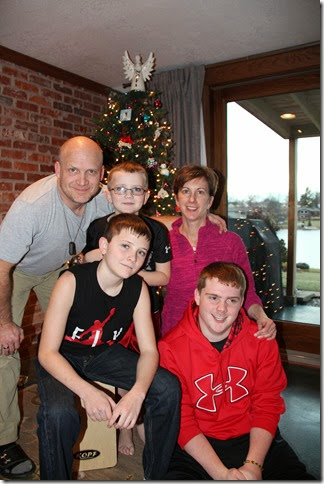 More to come—Christmas isn’t over yet!  We see on Instagram there is an adorable little furry animal in Colorado!

I’m surprised I haven’t seen a headline on my online newspapers or Facebook entitled: “Ten Most Popular Christmas Cookies.”  Well, actually I just Googled that very topic and guess what—there is an article with that headline.   I clicked on it and read it.  Who wouldn’t?

My uneducated guess is that there wasn’t much of a scientific poll taken to find what cookies people prefer, but here is the general gist of the list! There were sugar cookies of all kinds,  cookies with Hershey kisses stuck in them, snickerdoodles, dipped cracker cookies, snowballs and gingerbread cutouts.  I can’t argue with any of these, but how could they leave out the delicious pinwheel date cookies.  Maybe they are too old fashioned for the modern taste.

So far my “go to” recipe for sharing this Christmas season are Ginger  Snaps.  They taste so good  each time I make them.  The one problem with this choice is that they need to be fresh—hot out of the oven.   The good news is that Ginger Snaps are easy to make.  A single recipe makes about three dozen, just right to fill a platter for sharing.


This recipe is one out of my Mom’s collection.  The name on the card is Noreen.  She is a friend and neighbor and the last “cousin” from my Dad’s generation.