The Hermann Wine Trail was fun but I wanted to do one more  Christmas activity on this last minute road trip.  A simple Google search for Christmas in St Louis brought up the special Christmas lighting at the Botanical Garden.  Even more exciting was the result of a Google map search.  Where we were at New Haven, Missouri was only a little over an hour from the Garden on just a backroad to I 44 which then exited right to the Garden parking.  We are not the most experienced city drivers, especially at night.  But, this was a easy destination.

The weather was still beautiful on Sunday evening.  The docents positioned around the light trail kept commenting on it.  The Garden was prepared for cold weather with bonfires throughout.  They even had marshmallows to roast and hot chocolate to buy.   The picture of Dan and I was taken by one of the bonfires where we sat and people watched for a spell.

I didn’t take many pictures—well actually I took a lot of pictures but not many turned out.  Night pictures are difficult.  Hopefully, there are enough to get the feel of the lovely evening.

For more lights, click here or on the picture, then on “slideshow” on the upper right corner of the web page.  Enjoy! 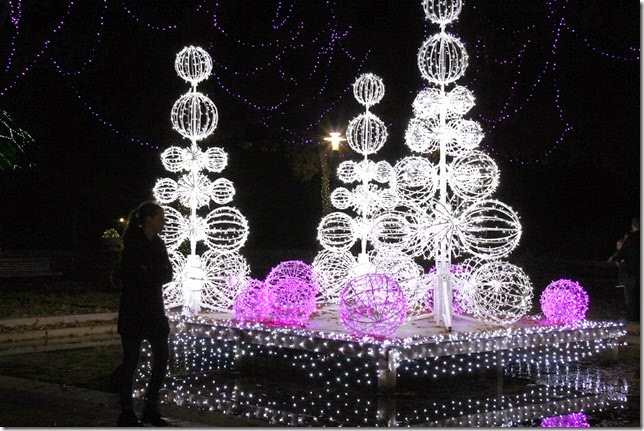 All last week, we kept checking the weather.  We told ourselves, if the forecast continued to show a warm weekend, we were going to take off in the PW one last time in 2014.

The weather held and we took off.

First, we attended our Card group Christmas party on Saturday evening.  We look forward to the December meeting at Vernon and Joyce’s home each year.  We even played cards until 10:00 pm.  But, we had the PW with us and we made it as far as Cabela’s parking lot before parking and sleeping.

Our destination was Hermann and the “Say Cheese” Wine Trail.  We arrived in Hermann by 11:00, picked up our ticket and were enjoying the first tasting by noon—outside at a picnic table at Stone Hill Winery. It was there that I took this picture of another van conversion RV, although a little smaller than the PW. 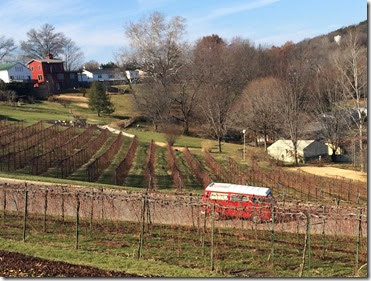 The weather held all day as we made our way through the seven wineries on the trail.  On any other winter day, this area at the Hermannhof winery would be full. 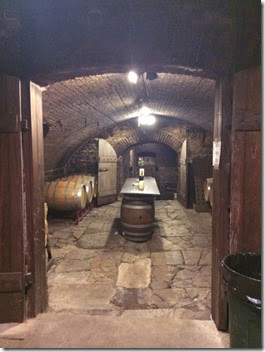 This is one of the delicious pairings—warm goat cheese rarebit paired with Vidal Blanc from Hermannhof. 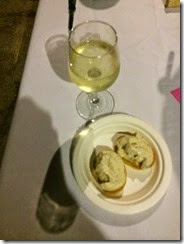 My favorite pairing was Pecorino Romano and Black Pepper Polenta paired with Syrah served at the Dierberg Star Lane Winery.  If I understand correctly, Dierberg is a California winery with a connection to Hermann.

Robller Winery is located at New Haven Missouri.  We had never driven around the river front area of this little river town.  What a surprise.  It is a well maintained, interesting area.  There is a glass blowing store, a distillery and movie theater.  Definitely a place to check out another time.

Robller’s pairing was a cheese plate from Cool Cow Cheese Company paired with Villa Rouge.  We usually save Robller’s for last.  The owners are friendly and make themselves available to chat about their operation.  We just like the atmosphere.  We weren’t disappointed this visit either when the owner of the Cool Cow Cheese Company came over to where we were sitting and filled us in about this cheese making business.

His cows come from a line originating on the Isle of Jersey, part of the Channel Islands of England where the Jersey cow was developed in the 19th century.  This line of cows was imported to the United States by George Vanderbilt and used in his dairy operation at the Biltmore mansion.

Tom, the owner of the Cool Cow Cheese Company, grew up on a dairy farm in Iowa.  (His father sits on the Board of Blue Bunny Ice Cream).  He indicated his family had some sort of link to the Vanderbilt family that enabled them to get into that line of cows.  We also learned Tom received 2nd Place at the Isle of Jersey International Cheese Competition as well as Cheesemaker of the Year.