Laura has an dynamic voice.  Listen and enjoy.

We’ve known Laura since she was only a thought.  What a joy to have Laura, her husband, James, and mom, Sue for lunch on Sunday.  There are always a lot of laughs when they are here.  Thank you Laura for sharing your incredible talent.

We arrived home last Thursday.  It was a beautiful trip.

This is the roadtrip we took from the lake.  It is through the Spanish Peaks region in southeast/central Colorado.  The Aspens had not reached their peak but still very pretty.

Here is the map. It isn’t too clear but Walsenburg is the top middle and the bottom right is Trinidad.  The red line through the middle requires a 4-wheel drive from what I could tell. 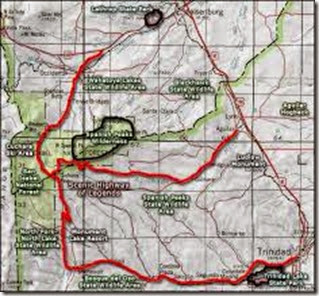 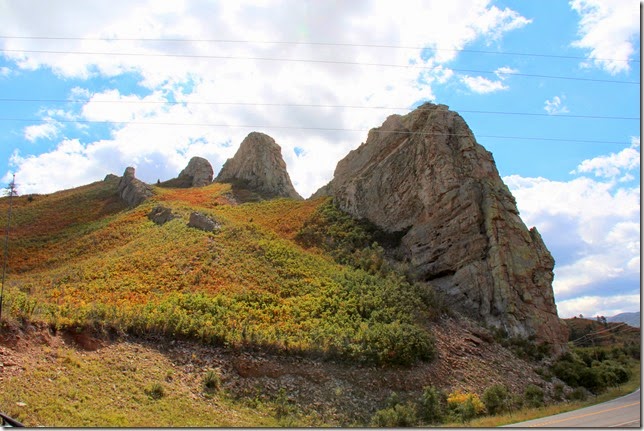 Interesting rock formations formed by lava from a volcano.  There are many of these in the area.

I didn’t get a picture, but the road went around Monument Lake.  It was a beautiful color much like the volcanic lakes we saw in Alaska.  Since there are remnants of volcanic rock I wonder if that caused the unusual color.

Once we reached Trinidad, it was the most flat land we’ve seen in ages.  Since we didn’t have any stops planned, we drove all the way to Hays, Kansas.  Flat all the way.

We observed that the farmers out in the plains take a lot of pride in their small towns.  Unlike in the mountains where tumbled down buildings are all over, the small plains towns are clean and well groomed.

It’s been crazy busy since we got back.  I have a couple things to share later, though.