Suzy is short for Suzuki.  You might be thinking motorcycle.

I have always been intrigued with the little Suzuki Sidekick or Geo Tracker, as far as I can tell, both the same car.  It looks like this:

They are very small and some are four wheel drive.  There is one that sits at a local farm that I’ve had my eye on for years—watching for a “for sale” sign that never appears.  Then, about six weeks ago, while surfing around the evil Craig’s List, I decided to do a search. 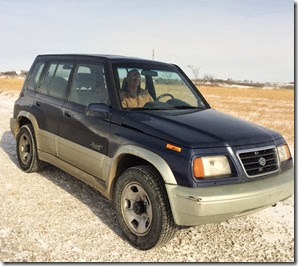 It is a 1997, Sidekick Sport which means it is a little bigger.  However, I think this picture makes it look bigger than it is.  It was listed in Kansas City.  It was kept in the garage and and well taken care of mechanically.  A little high in miles at over 135,000, but it is 17 years old.  The five speed is fun.  And, it goes great in the snow.  And, I call it mine—although you notice Dan is driving!

Really, I know nothing about front range weather.  I am sure there is a lot to learn about how the mountains create air currents and moisture conditions.

Monument is located on the Palmer Ridge.  So, when we go to Colorado Springs, we go down hill—sort of.  Here are two pictures of a interesting cloud formation on our way south last weekend.  It didn’t take long for us to be in the cloud.  By the time we returned, it had moved north, creating  cloud cover where this picture was taken.  I know our kids are used to this phenomena, but we flatlanders are used to seeing clouds move in from the side, not up from the bottom.  The top picture was taken through the tinted window on the car because everyone was tired of me rolling the window down trying to get a picture. I think Pikes Peak is to the left barely above the cloud. 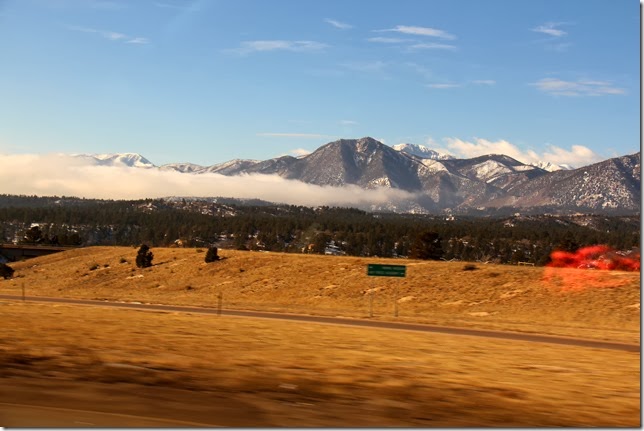 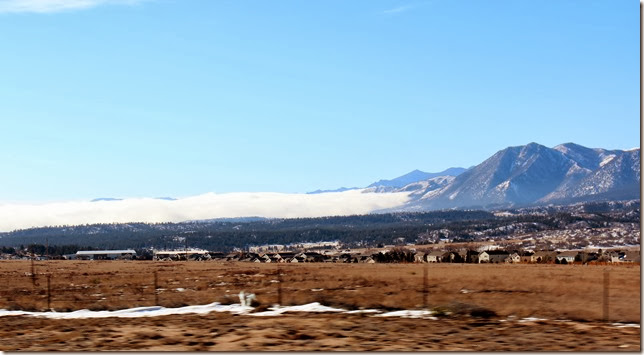 Even though I probably would say to anyone who asked that I love snow, I think the recent two weeks of snow cover and cold temperatures put a damper on my writing or even any creative thoughts, though.  I would sit down to write a post and nothing came to mind.  I don't think anyone wants to read about what I cooked for dinner.  Although, I will say the cold days did produce some tasty dishes.

What to do if everything is covered with snow in the area?  Take off for Colorado, where the temperatures were in the 50s.

We left last Thursday morning, needing a little umpf to get up the slight grade from our garage to clear gravel to get traction and on up the driveway.  Thankfully, we had our Suzy to help out.  (Suzy is for another post).

The trip out was uneventful and relaxing.  I've said before that Dan and I  look forward to the eight hours on the road.  There is always something new to look at, talk about or read.  I drove from Hays to Limon going out.  I think Dan was coming down with a cold and didn't know it.  Doug was sick with a bad cold the whole time we were out there.  Dan probably wasn’t quite as bad as Doug, but both went through lots of Kleenex and cough drops.

I was greeted with a birthday bouquet. 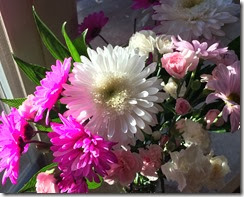 Just what I needed to ward off winter doldrums.

The three days flew by.  Carly could hardly wait to watch a borrowed copy of "The Hunger Games." with us.    I didn't think I would like the movie due to the disturbing storyline.  It was a very good, though.  It was obvious Carly had watched the movie more than once before. I am now hooked too and must read the other two novels of the trilogy.  Carly especially likes the heroine, Katniss Everdeen—she is a strong role model for young girls.  Here are a couple pictures that will mean more if you have seen the movie. 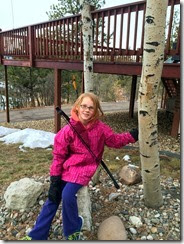 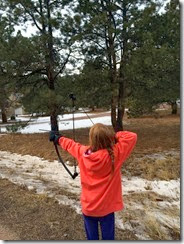 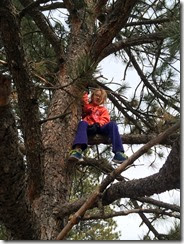 Mostly, we played Sequence, watched the Olympics, KSU basketball and just hung out.  Carly and I made some hearts and chocolate covered strawberries.  Dan & I watched the kids practice their music. 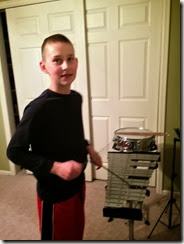 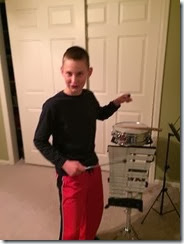 We did see one movie--The Lego Movie.  It was fun considering it is a movie made with Legos?  It was funny, cute and had a good message.  The title song is so catchy that we sang it on the way home and still this morning.  Here is a link to the YouTube video--hard to get through the whole song, but has to be the most positive song message ever.  “Everything is Awesome, Everything is Cool when we’re part of a team….”  Can’t beat that.

One thing happened this weekend.  I took a bunch of phone pictures and only a couple camera pictures.  I can't let this be a trend because the camera pictures are fine on a phone but not so good enlarged on this space.

One last picture as we left this morning. 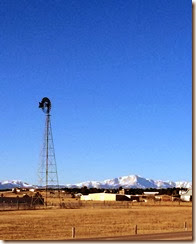