It seems no matter when I plant green beans, they begin to produce right around Dan’s birthday, the end of June.  I picked enough today for a good meal, not enough to can yet.

I actually planted the green beans two times.  The first planting did not germinate well and so the plants were sporadic.  So, we planted a second row right along the first.  As I said, it doesn’t seem to matter when the beans are planted because both plantings are blooming and putting on beans.

I didn’t plant Top Crop again this year.  The newer seeds are so much better.  Not nearly as likely to get “beanie.”  That’s when the little beans inside get big….and beanie.

If the end of June is green bean season, so it is jigger (chigger if they don’t bother you) season.  And, those pesky jiggers like green beans.  I don’t like to use any kind of bug spray on myself while working among the plants in the garden.  So, I’m just trying to wash well after coming in.  They don’t itch so much if I don’t think about them.  Right now, they are itching.

We received a nice little rain tonight.  Perfect timing for the sweet corn.  We have some that is beginning to tassel.  Okra anyone?  There is going to be a bunch of it this year.  Just about all the plants have little tiny okras set on.  I better check tomorrow because those things grow unbelievably fast.

I’ve dug about five potato hills.  So far, not too impressive.  I knew I should have checked the almanac before we planted.

So, that’s the skinny on the garden.  Love those fresh vegetables.

Saturday evening we attended a lecture presented by the Dickinson Co Historical Society about Camp Concordia.  We were especially interested because both of us remember our parents talking about the German POWs helping on farms in the area.

By the time the United States entered WWII, Britain already had been fighting for two years.  The English people were struggling under the pressures of bombings, war efforts and food for their citizens.  Maintaining the Geneva Convention for treatment of prisoners of war was becoming a big a drain on the already struggling British economy.  For that reason, almost immediately plans began for housing prisoners in the US.

The camp at Concordia was built September 15, 1942 and closed November 5, 1945.  Here is a picture I borrowed from the the POW Camp Concordia web site. 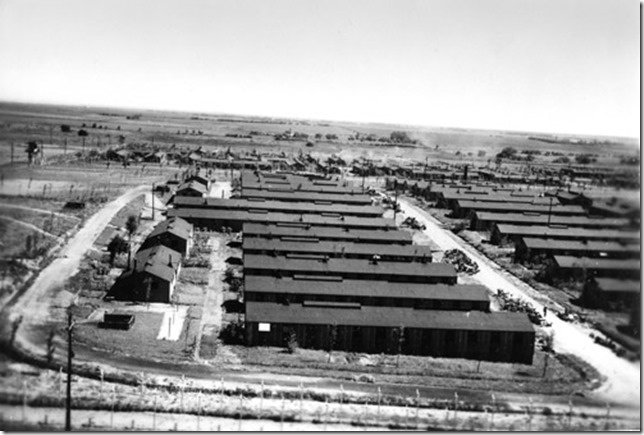 The camp was built to be a model POW camp.  However, the first commander of the camp did not anticipate some of the first to be shipped in were Nazi officers.  Discipline quickly got out of hand when the Nazi “leaders” used strong arm tactics on the other enlisted soldier prisoners,  most of whom were not members of Nazi party and were not in whole hearted agreement with the party’s tactics.  After several questionable deaths, the Nazi officers were shipped to another camp, the commander was replaced and the camp ran smoothly for the rest of the war.

Escape was not a big problem.  The soldiers were well fed and cared for and they were away from the fighting.  They were expected to work, but were paid the going rate so work was not taken away from local people.  However, the prisoners were required to pay back a percentage to the US government to pay for their upkeep.

Many were allowed to be picked up by local farmers to help with farm work.  They were always accompanied by a guard, but according to several who had the POWs at their family farms, the “guarding” was informal to say the least.

There was a library with books written in German.  Kansas University offered courses so prisoners could begin to earn a degree while at the camp.

Many of the local people received gifts from the prisoners.  There were several on display at the meeting.  Also, after the war, many returned to the area to visit.  One that someone in attendance knew of moved back to Salina and started a business.  They were not allowed to just remain in the United States, however.  They had to be shipped back to Germany for repatriation.

One building remains at Camp Concordia, T9.  Over the years, it has been used for a horse race track, stable, skating rink and, now, a historical museum.  Even though the outside has been covered over the years, the original layout of the building is visible from the inside.

It was well worth the trip for the lecture.  The Concordia site is now on our “must visit” Kansas list.