It probably isn’t surprising that the Kansas Rural Water Convention had a contest to find the best drinking water in Kansas.

This is one judging I would like to watch.  I don’t know how many rural water districts there are in Kansas.  Let’s just guess 50.  How can someone drink 50 samples of water and pick the best?  Like I said, it would be interesting.

The first place winner last year should be noted because they went on to be the second place winner nationally.  Emporia!  So, if good tasting water is a priority,  move to Emporia.  I think it was in a category called  “public wholesale water”, which would be any water in a city or rural water district I would assume.

The 2013 best water in Kansas was won by either Cunningham or Augusta.  I wrote both names down.  If they both were mentioned, there is good water both places.

I’m sure any water drawn from wells would win out over water like ours, drawn from a lake and treated.  Still, I think our water is pretty good.

As a member of the Douglas County 3 Rural Water District Board of Directors, Dan was invited to attend the convention this year.  So, I tagged along.  It was  a great two days.

Dan attended the education sessions.  I will not try to write about what he learned, although it sounded interesting, especially the session on GPS mapping.  I will report from my perspective—just fun.

Tuesday evening was the “Midway Luau.”   We were entertained the entire evening by a five piece live band who said they had been a group longer than any in Kansas—“King Midas and the Mufflers.”  They were very good.   There were at least five games straight from the state fair midway a casino, bingo and numerous other games.  Winners at the games are given tickets which are put into buckets where a name is drawn for a prize.  No luck for us with the prizes, but here are a couple of examples of other booths.   I don’t think this looks too much like either of us, but it does make us look younger! 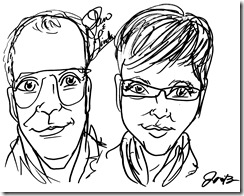 We made this crazy movie with Robin & Jane.

Dancing in the Streets

Kent Rader gave the Keynote address, “Let’s Pull Together” on Wednesday morning.   He is a comedian with impressive credentials.  His humor was the basis of a message that encouraged all to keep humor in the workplace and all parts of life, especially to reduce stress.

From there my long time friend Kathy picked me up for a day of visiting and hanging out.  She gave me a tour of Wichita, including a lunch at the Wichita Fish Company.  Seriously, this was the best fish meal I’ve eaten since we were in Alaska.  I had a almond crusted Halibut over sautéed vegetables and rice with coleslaw.  It is just a little place, certainly not fancy (our order was served in a “to go” box.

I’m not sure what is going on in Wichita with the Notre Dame stained glass window done in Women’s underwear on a downtown building.  Not kidding!  Here’s a picture and here’s a link to the Wichita Eagle article on the artistic endeavor. 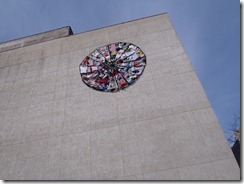 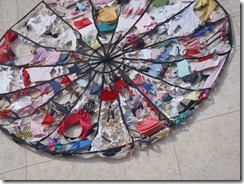 Then, here are  pictures of one of the beautiful Vets restored by Kathy’s husband.  Pristine inside and out.  Sounds wonderful. 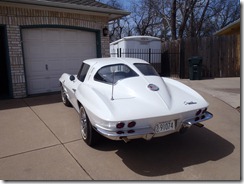 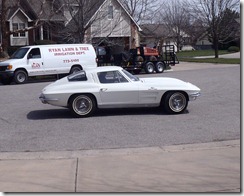 The final highlight for me was the musical “nunsense, A Musical Comedy” presented by the The Theatre Company at the Forum.  It was the entire performance, not just a sample. Lots of laughs, beautiful voices.

Two additional thoughts about the convention.  First, the food was exceptional.  I usually don’t expect food to be that great when serving over a thousand people.  Second, the decorations were balloons.  I have to share a couple pictures of the creative way they were used. 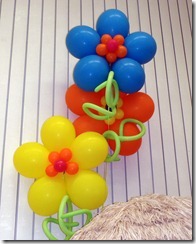 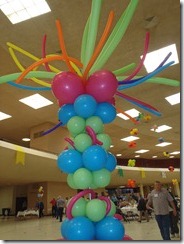 Snow with our basketball

Even though KSU is out, we are drawn in to watching basketball.

And, just when I brought home seed potatoes and onions, in blows another snow storm.  Things are slow around here.  However, I did make a new recipe this afternoon for Taco soup.  Simple to make—mostly just opening cans.  This recipe is a lot like the one Drue served in Colorado.