Once again I am linking to a story from “This American Life”  I listened to on the way to Colorado last week.  The name of the episode was “No Coincidence, No Story”

The producers of the WBZ radio show asked listeners to send stories of coincidences in their lives.  It was a fascinating segment.  Most of the featured stories were almost unbelievable.  For example, a person asked a new acquaintance to send him a picture.  In the background of that picture there was his grandmother.  And these two people lived thousands of miles from one another.

Another example was a young lady wrote her name on five or six dollar bills and dropped them into circulation with the thought that the person who found one of them would be the person she marries.  Really, listening to the story would be a better way to learn about this coincidence.

So, here is the coincidence that happened to us this week.  First, the picture. 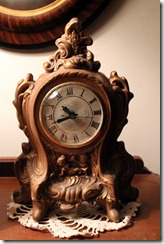 Years ago, probably when we were first married, my Mom made this ceramic clock for Dan and I.  Recently,  I moved it to its current location in our bedroom but did not plug it in.

Last Monday we were going through the house setting the clocks forward for daylight savings time.  We had just set the alarm clocks in the bedroom to 10:11 and turned to this clock. (As I said, it was not plugged in.)  I still can hardly believe the hands were at 10:11.

We moved the dresser and plugged it in.  Sometimes I wish we would have left it alone.

A pond is beginning to appear! 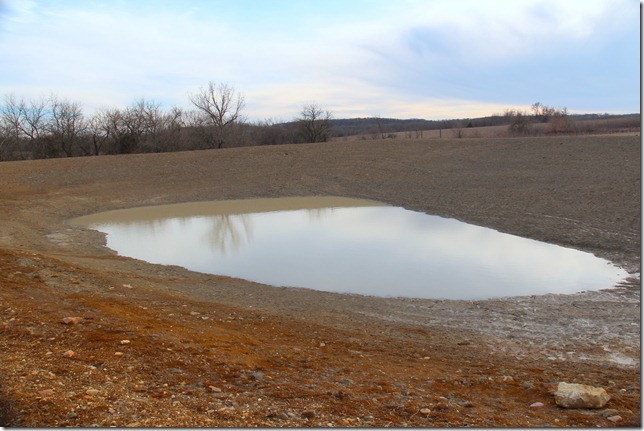 The lower right corner shows some sign that the spring in that ravine might be running.  In a wet year, it will trickle continuously.  We have not seen that the past couple years.  Hopefully, this is a good sign.

Combine March wind with Colorado snow and watch out, even if the sky is clear and the sun shines brightly.

That is what we discovered this morning.  We checked the radar and it looked good.  So, we took off for home.

Almost as an afterthought, we filled up our half empty tank with gas in Monument—not like us.  We usually drive until the needle is hitting against empty.  Thanks to that five minute stop, we might have escaped the terrible accident we went by on Hwy 24 near Calhan.  It happened minutes before.  There were several people there and the roads were slick in that area so we kept going.  We wondered all day if we should have stopped, but we have no skills and we were afraid stopped cars could become a hazard.  As soon as we got home, I checked on news of the accident—here.  We knew they closed the road because Drue texted us.  It appears a lady and her small child have life threatening injuries.  From what we saw of the car, I cannot believe anyone lived through the accident.  Very disturbing.

There was a lot of blowing snow on Hwy 24 on into Limon.  They eventually closed it.  I think we slipped through just ahead of that.

We thought we were home free at Limon.  But, westbound I70 was closed.  We saw six or seven cars on their sides so it must have been slick over there.  However, it wasn’t too bad eastbound.  We slowed down and took our time.   We stopped at the rest stop at Arriba CO (about half way between Limon and Burlington) and from there on, the roads were almost clear.  We got in our car at the Arriba rest stop the same time as the car next to us and the driver said he had never seen so many cars on their sides—and, “I’m from Wyoming!”

When we passed Goodland, they were closing the gates on the westbound lane as we passed. Probably not so much because of the roads but facilities.

After the first couple hours, the day went very well.  And, the good news is our rain gauge has 2 1/2 inches of rain (we think some of it is the snow from last week).  Still, very welcome moisture while we were gone. 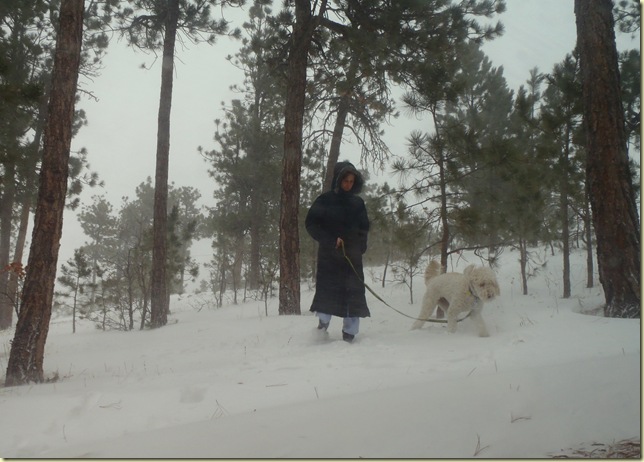