My Colorado cousin and friend, Sylvie, commented about kettle corn in my popcorn ramblings yesterday.  I do love that stuff.  Little booths outside of Cabela’s in Kansas City,  KSU football games, fairs and farmers markets—always there to tempt me.

I’ve never thought about making it myself so I’m looking forward to trying it this weekend.   Thanks Sylvie! 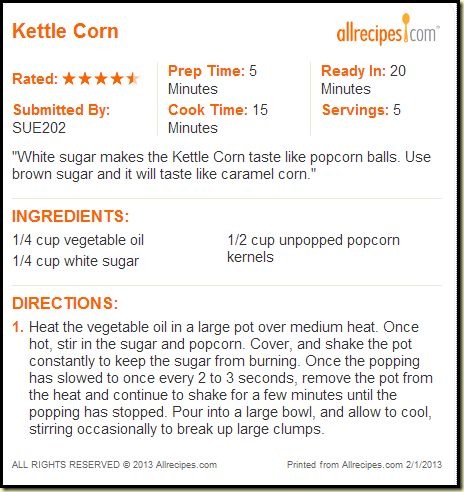 Popcorn is the snack of choice this winter.  I  started making it when my friend Sue game me some popcorn she purchased locally.  I couldn’t replenish my supply because the market closed for the winter so I am buying the white corn from the grocery store and it is just about as good—almost as free of hulls and pops well.

I have several poppers around here.  This is the one I grew up using.  It will crank out a lot of popcorn.  It’s a little tricky to get the heat just right so the kernels don’t burn or get tough.    I put enough corn in that the lid pops up with the popping corn. 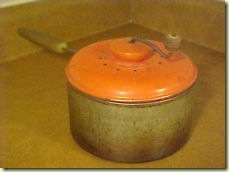 Several years ago, I saw these in Walmart.  It is a microwave popper.  I can pop as much per batch in this as my orange topped popper.  It’s less messy.  The only draw back is that I need to buy small heat “cups” that fit in the bottom.  They are fairly inexpensive.  I am so into popcorn that I gave several of these for Christmas and think I might have written about it then.  This is how mine looks when it’s done popping.  It takes about three minutes. 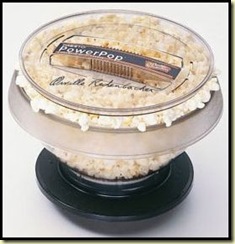 Glass microwave poppers are cropping up in ads lately.  I have no idea whether they work or not.  It looks like they don’t make much at a time. 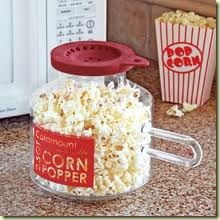 Wayne and Ruth eat popcorn regularly—at least they have in the past.  This is the popper I’ve seen Ruth use.  The nice thing about this one is the lid is the pan.  It makes good corn for sure. 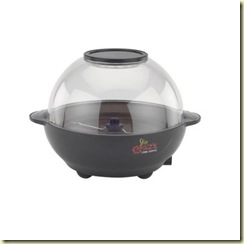 I used to have one of those air poppers.  If I can’t have a little oil—and I mean only a couple tablespoons per popper full—then I’ll skip eating it altogether.  That air corn is bad.  I ended up using way too much salt to make it halfway good. 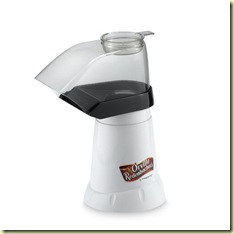 Neighbors Christi and Tom have a popper like this.  It is so cute and does make good corn.  One drawback as far as I can see is that it takes a lot of cleaning up for only one batch.  It would be perfect for making lots of popcorn over the course of an evening.

Popping corn in the bags is tasty enough and often has butter included.  But, it doesn’t make enough.  Making a big bowl for a group would be more expensive than the other options.

My favorite?  I probably prefer the second one down—microwave popper.  However, there is nothing wrong with the first one—just not quite as fast.

I’ll be making a big bowl for the super bowl.  Can’t be beat.

We left Monument at 6:30 AM, picked up Kim’s friend in Denver and headed for home.  Stops were minimum but timely.  We were driving down our driveway at 9 hours, that included dropping off Beth in Topeka and unloading from Kim’s car to ours.

It was good to see our Colorado family, especially Trent and Carly in their favorite sports.  We managed to squeeze a  lot of fun, good food and excellent home brew into two full days.

Again, we talked about how a few days away from home feels good.  Dan and I are in too much of a similar daily routine making the weeks fly by.  Anyway, these short trips slow things down.

I bought a new rug for the NorthStar at Costco in the Springs.  As soon as we got home I had to take it out and crawl up into the camper to see how it looks.  That and the 70 plus degree temperature today prompted me to drag out the travel brochures this evening.

Trent’s birthday “cake” a bit belated.  We waited until his Aunt Kim could be there on Sunday evening. 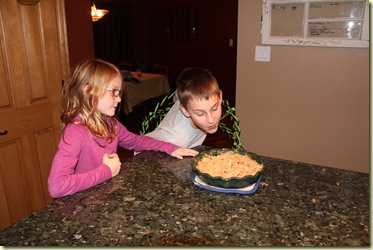 And, Doug’s pride and joys 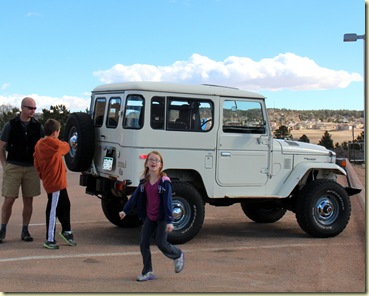 No cold weather today.  Actually, a perfect day to fly a kite. 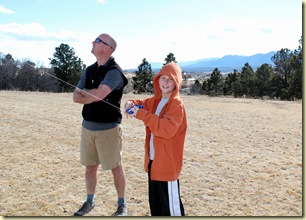 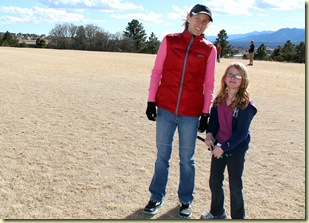 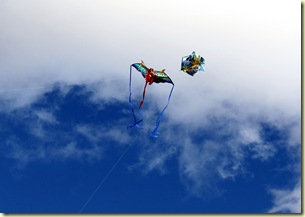 Here are the glasses we painted. 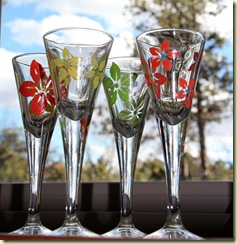