There’s a Cat in the pasture….

Finally, after 34 years, we’re putting in a pond.  The combination of a dry year and the Cat in the neighborhood  was the deciding factor.

One day’s work has made quite a difference. It was too dark for a good picture tonight. The pond we’ve looked at for years is all but dried up. The KWP is not going to clean out that pond so it holds more water. Now, the small pond we are building is on the drainage for the old pond. It will probably will not come back even when it rains. We walked down to inspect it Thanksgiving Day.  If we get a really hard freeze, I don’t see how any living thing in it can survive. 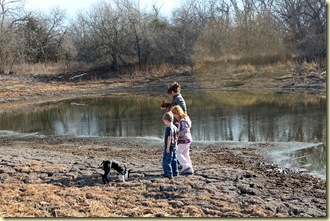 We made the little chickens, but they didn’t quite look like the original—a little disheveled.  Or, maybe just groovin with the sunglasses look. 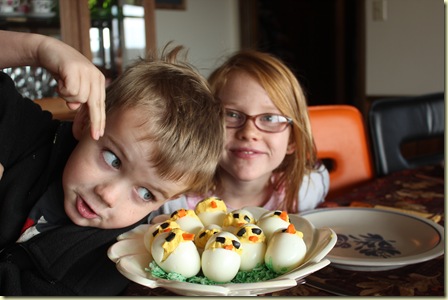 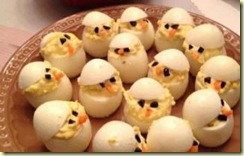 Never discourage help in the kitchen

So, we decided—or maybe I decided—to have Bacon-Potato Soup from Carolyn & Lloyd Wulfkuhle's Anniversary Cookbook for supper on Friday evening.  I had the recipe bookmarked and ingredients purchased to double the recipe.

I fried the bacon while Drue & Kim assembled the other ingredients.  We got as far on the instructions to, “Cook till done.”  That's when things began to change.

Kim tasted and decided we needed to add all the left over turkey.  Marc tasted and added some cajan style seasoning.  Then Drue opened a can of chicken broth & dumped.  I'm pretty sure at least two maybe three packages of my garden raised frozen corn went in.  There was some talk of white wine—not sure about that.  About that time we stirred in thickening from recipe.  I distinctly remember thinking that wasn't enough milk so poured at least a half cup of whipping cream.  Kim & Marc had brought a bag broccoli.  At the last minute, Kim had precooked those and they went in, along with the rest of the fresh parsley chopped.

This simple recipe ended up being the best “Potato Bacon Soup” I've ever tasted!  And, that's why I never discourage anyone from helping in the kitchen.
Posted by Linda at 8:48 AM 1 comment: