Rain = one and a half inch

It’s been a while.  A nice, slow rainy day.  A day of doing a few things around the house and watching football.

Leaves are turning beautifully around here.  And, they seem to be still on the trees despite the rain.  That is good because there may be a fall tree peeping trip in our future…. 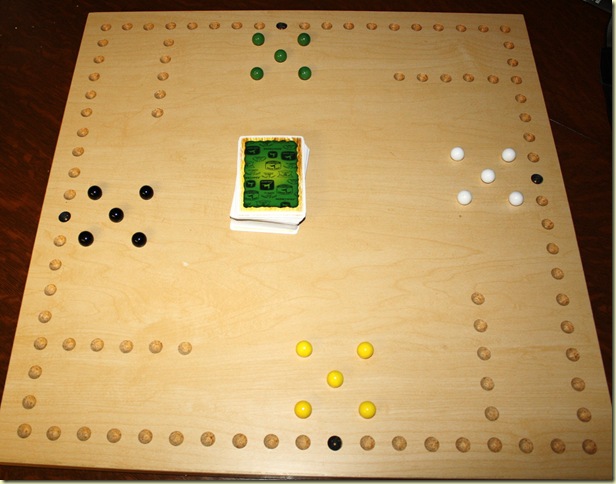 Joker Rules
Point of game—get all five marbles from one home to another much like Parcheesi.
Four people – two decks of cards—partners across the board (can be played with 6 or even 8 people but requires a different board)
Each person gets five cards.  After a play with a card, draw back to five
All face cards and Ace brings a marble out—if used to bring marble out, no moves are made with the card.
Moves on board:
Face cards 10 moves
Eight card only moves backward
Seven card can be split between two marbles
All other cards move according to their number
Joker: player who plays a joker can either replace partner's marble with own or send opponent marble home.
Marbles are sent home if landed on by opposing team's marble in a move determined by a card.
Marbles landed on by own team get sent to base of home row—an important fact when using the Joker for partner's benefit.
The board uses five marbles for each player. From the place where marbles are moved out, there are eight moves to the right and ten moves to the left.
If partner gets all marbles home, all subsequent moves are for partner.
It only takes one round of play to see benefits of certain plays that are too hard to explain here. Most important is to get the board right. (The picture is deceiving, the board is square)  If anyone wants the plan, let me know. I will cut a paper the size of the board and mark the marble spots & mail it to you. Or, if close by, Dan would make one for you. It is a fun game with just enough strategy to be interesting.
Thank you Kay & Lynn for bringing this game to us from Arizona.
Posted by Linda at 11:07 PM 2 comments:

Back when Kim and Doug were in school, we looked forward to attending their functions.  When they graduated, there was a little sadness that it was all over.  Guess what, we are back attending school events, watching grandchildren.

Regretfully, we don’t get to see Trent and Carly in Colorado participate as often as we would like.  However, when we were out just a few weeks ago, I sat in on both their piano lessons.  Then all of us got to attend Trent’s flag football game.

This week we will see Adam sing at his school fall musical.  The gym will be packed with parents and grandparents supporting music—always a good thing.

Tonight was Aaron’s last 7th grade football game.  Here is a picture I think he wouldn’t mind me posting. 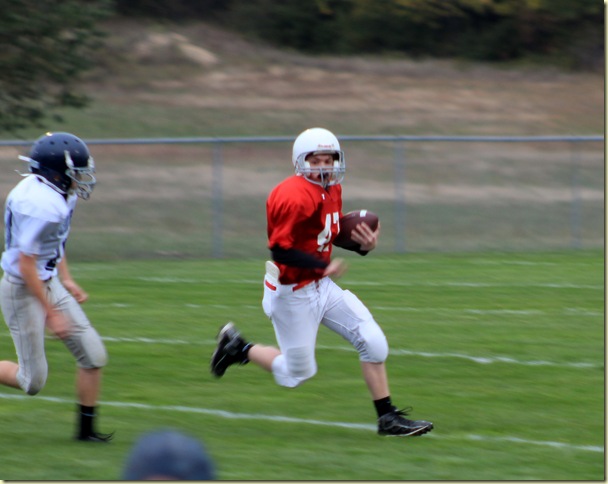 October is our favorite time of year to camp considering fall colors and temperatures.  So, when our neighbors, Christi & Tom, called when the football tickets went on sale wondering if we would like to go with them and Christi’s folks to the game and camp out the weekend, we jumped on the plans.

What fun!   The football game turns out to be exciting.  KU makes an interesting first half but KSU prevails in the second half.  Mutual friends Lucille and Larry come over after the game and help us eat the Milk Can stew.  We end up playing cards until late.  Dutch Oven breakfast casserole this morning. Treasure hunting.  First Geocaching then Christi’s fantastic find where the water has receded from the drought in the Tuttle Creek lake area.

Oh, and it was cold!  Who would have thought when we planned this in 100 plus temperatures this summer that we would be seeing 27 degrees on our thermometer this morning!  Thanks to thinking ahead, we had shelter from the wind and a warm outdoor heater.  Both our campers have furnaces so we stayed toasty to sleep.

I have pictures.  However, my SmugMug website is temporarily down.  As soon as it is back up and running, I will put up a link to the slide show.  You’ve got to watch it just to see Christi’s big find!

Note:  Hover with mouse to start or pause slideshow.