What’s going on?  Well, Dan is working on a platform for a small shed. I’m still trying to clean out several closets, but not too enthusiastically. I helped Kim out by staying with the boys until she could get home as Marc was out-of-town. We ran to town for groceries.

Our retired friends Kay and Lynn are parked back at Lake Shawnee campground.  They had a busy week planned before they head back to Phoenix.  Even though Lake Shawnee is a little out of the way, it certainly does not qualify for out in the sticks like here.  We will get together to play Joker again before they leave because even after at least three or four nights of playing this game, we are still tied.  (Joker deserves a post all of its own)

Today was my friend Carole’s last day at the Berryton Post Office.  Tomorrow we are having a little retirement get together for her.  The end of last month my friend Sue also retired from her rural route as well.  I spoke briefly with Carole today and ask her how she felt about driving her route for the last time.  “Weird” was her reply.  Her voice sounded a little—just a little—sad.   Sue expressed something similar at her party.

Nearly everyone I know who isn’t already retired, expresses excitement at the prospect of less responsibilities.  Speaking for myself, though,  the daily mail delivery was challenging.  The feeling of being of service to many people each day was fulfilling.  That taken away left a small nagging thought that I am no longer needed.  That maybe I’m now “put out to pasture.”   That feeling lasted—maybe a week.  It left about the time I watched a rainy, cold day out my window with a warm cup of tea in my hands.

Congratulations to Sue and Carole who will also put “rural carrier retired” after their names.  From now on, their weeks will be extra ordinary like mine this week because they can do all those things they’ve wanted,  even maybe clean out a closet. 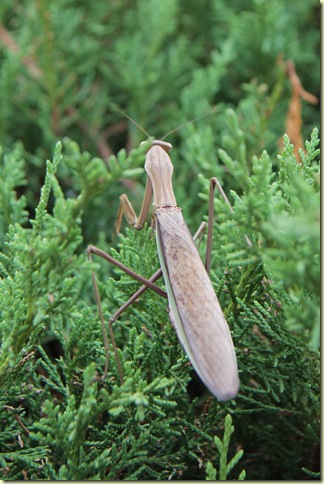 Dan spotted this beauty out front on a bush.  Here is another view 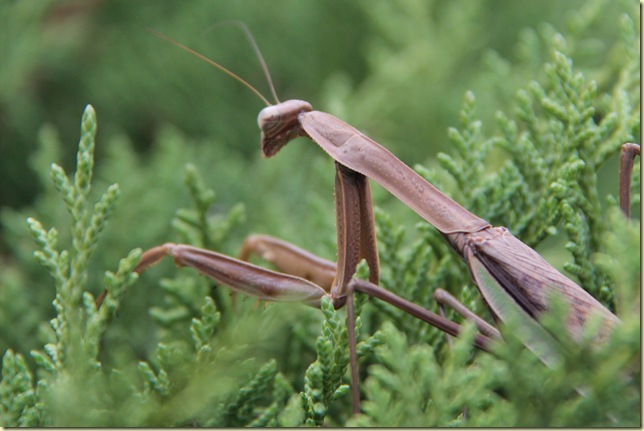 According to this site, mantis was “the Greek word for prophet or fortune teller.”  It gets its name from the stance it takes to capture its prey.  In hunting, its triangle head is able to turn 180 degrees.

It must have been hunting because I went out about 30 minutes after Dan found it and it was still hanging around on the cedar.

We have enjoyed Kay and Lynn’s visit from Apache Junction, Arizona, including the beautiful weather they brought with them.  In keeping with our tradition of visiting a presidential library, we traveled east to Independence and the Truman Library last week.   Like Eisenhower’s library last year, the Truman library provides a wealth of information about a important time in history—the end of World War II and the Korean War. 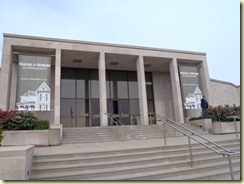 The library building and grounds sit adjacent to Highway 24 just north of downtown Independence.  The front is impressive as is the Thomas Hart Benton mural in the entrance. 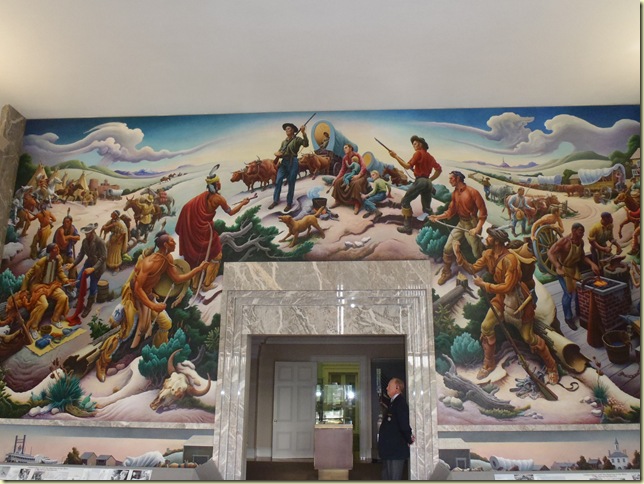 The next room as we entered through the arch is the oval office exactly as it was during the Truman administration.  Definitely it conveys a feeling of “being there” with the period furniture and communication devices.

An important part of the library is a very well done 45 minute movie featuring Harry S. Truman before, during and after his presidency.  I did not know of his meritorious service during WWI or his entrance into politics through the Kansas City political machine.

From there we meandered through the museum reading, listening and watching.  Former President Truman was a man of many quotes, including,  “It is amazing what you can accomplish if you do not care who gets the credit.” The Marshall Plan for the reconstruction of Europe after the WWII is an example.   Also… 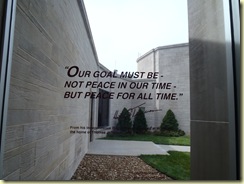 It was President Truman who ordered the bombing of Japan.  Over the years, there has been speculation as to whether the drastic response was necessary.  So, an entire exhibit is dedicated to this particular time in his presidency, including a book encouraging visitors  to write their feelings about the matter.

I am always pleased when I have a chance to peek into the personal life of someone of history.  We learned he wrote many letters, including loving and informative letters to his wife Bess.  He was an avid piano player and was quoted as saying, “If I hadn’t been President of the United States, I probably would have ended up a piano player in a bawdy house.” Along with playing the piano regularly, he took a snappy 120 paces per minute walk each morning.

Just as we were leaving the main library to visit the courtyard and burial place, there was this final picture.  One that we all have seen at one time or another. 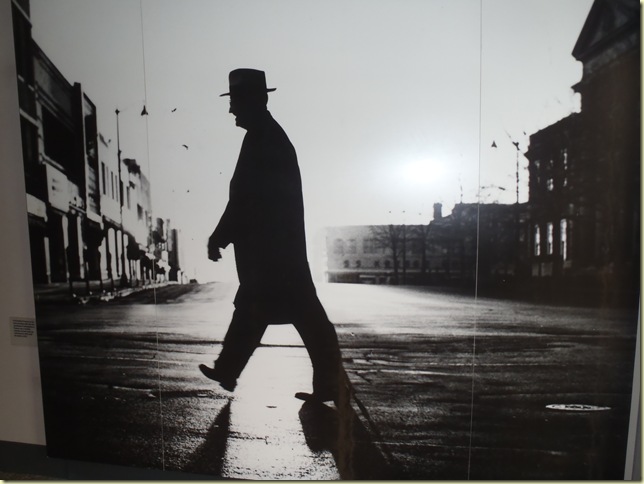 Harry S. Truman came into the White House after Franklin D. Roosevelt died shortly after being elected for a third term.  It was a time of many changes.  Truman led, made decisions and didn’t look back.  And, through it all, he made it clear,