Sometimes it just works out to take off. So we did.

There are always jobs that need to be done but we haven't been on an overnighter for a while.

So we left on Thursday morning around 11:00 hoping to arrive at Kurzweil's Country Meat Market between Harrisonville and Garden City, Missouri, on Hwy 7 during the lunch hour.  Luckily, it  only takes an hour and half, plenty of time to enjoy our pulled pork sandwiches, baked beans and potato salad.  We buy two smoked pork chops for our evening meal and a package of Norton Portabella Mushroom brats. 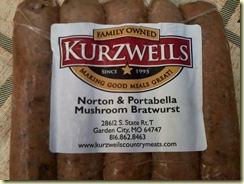 I'm not sure when I've seen a bigger selection of brats.  We had some for breakfast this morning and it may be worth the trip just to get brats.  This is a highly recommended stop.

On to Nob Noster State Park.  Dan wanted to pick up some reloading supplies in Sedalia so this nearby State Park is a perfect location.  It is a clean, wooded park with plenty of room between parking areas.  The high hardwood trees provide nice shade. It would be beautiful in the fall.  With the Senior Discount, it was only $11 a night for a tent spot. It sets very near Whitman Air Force Base so there is some noise.  Whitman is the home of B52's.  We know they were taking off because the park ranger told us that was the roar we were hearing.  Unfortunately, we did not get to see one.  I would like to see one of those magnificent planes up close and it might be worth the trip back to attend an open house. 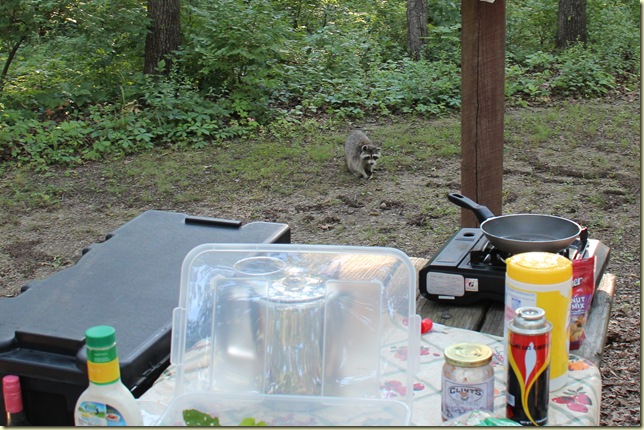 We chase him away, but later when we were sitting at our camp fire, a young girl from a neighboring camp spot alerts us that he is climbing up on our picnic table.  Once again we chase him away.  Finally, around 10:00 pm we put everything away and are climbing into bed thinking we're good for the night when I hear this odd sound.  I turn over in bed and there is Mr. Raccoon at the screen door of the tent looking in.  Next thing I hear him trying to climb up to our cooler, which is right by my side of the bed on the trailer.  Dan and I yell at the same time and he runs away.  Then, at 2:30 am, I hear him back again at the cooler.  I'm prepared this time.  I have a water bottle and have a place where I can stick my arm out the window.  I let go of the water bottle and he makes a squawk and takes off.  Thankfully, that is it for the night.  They are going to have to do something about him as he has become too accustomed to humans.

Today, we visited the Bothwell State Historical Site which is  about five miles north of Sedalia.  John Bothwell, a successful lawyer and banker, built his 31 room lodge on the side of a steep hillside with natural stone mined from the site.  From a distance it looks like a castle on the hill. 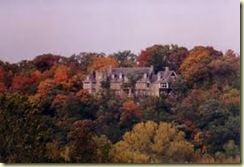 He  married a native of Sedalia, the daughter of a railroad executive.  She died from complications of her first pregnancy and he never remarried.  He enjoyed entertaining and many of his guests spent the night hence many bedrooms. Most of the furnishings are original as are the adornments. 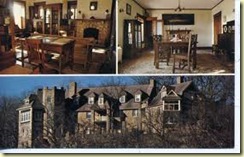 The castle is a well preserved example of a home owned by a person of wealth in the early 1900s.  The State of Missouri was given the chance to purchase the home after Mr. Bothwell's heirs died in the 1970's.  It is an interesting tour and only costs $4 a piece.  Well worth a stop.

Our circle was complete around 4:30 pm.  It felt like we were gone much longer.  A great little road trip.

Note:  Pictures of Bothwell Lodge borrowed from Google Images.  For some reason, I did not take any pictures—totally unlike me.

Decided to slip away for a little one night road trip. Hoping the fact we are "tenting it" will bring rain. 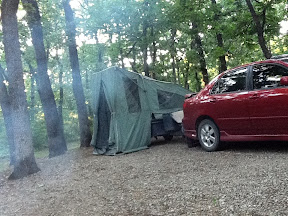 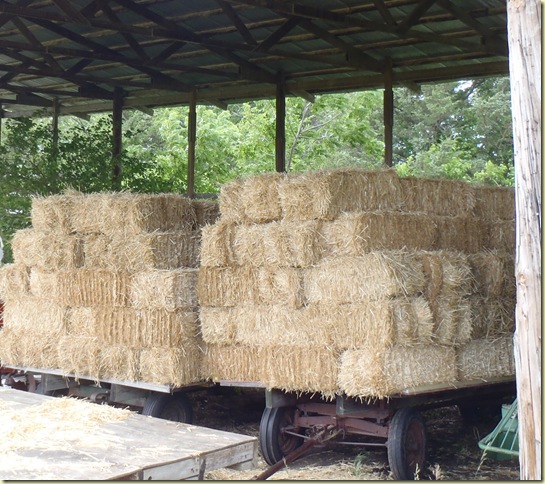 This was our weekend project.  The bales are heavy for straw, about 50 pounds.   We might be getting too old for this.

It’s for sale by the way.

Symphony in the Flint Hills 2012

The Kansas City Symphony began their 2012 concert  with  “An Outdoor Overture” by Aaron Copland.  It reminded me of the prairie.  Surely Mr. Copland experienced a warm, sunny, breezy, or windy depending on perspective, Kansas flint hills day to write this music—straight  forward with undertones of whirling and dancing. 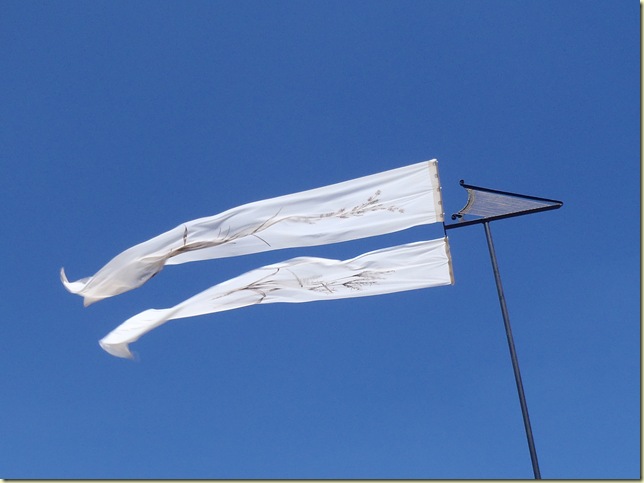 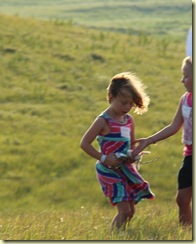 The symphony flags were straight out most of the day as were hats, chairs and blankets.  My straw hat, tightly secured on my head with a  bolo tie, picked up a butterfly which stuck with me the whole day.  Well, almost. 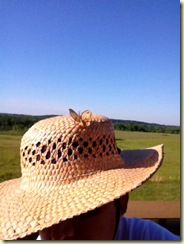 Our volunteer time was 12:30 until 6:30 pm so the educational programs all conflicted with our schedule. My responsibility was to be available to answer questions in the vast hillside seating area.  It was fun to interact and catch the upbeat spirit of the day.  What was the most asked question?  “Where’s the beer tent?”

I don’t have any interesting facts to report about the flint hills this year.  There is a thank you gathering for volunteers in the fall and this year some of the speakers will repeat their presentations.  Also, I look forward to reading my Field Journal which also covers many of the topics such as the Flint Hills Natural History, The Kanza Rail-Trail Controversy and The Flint Hills Nature Trail.  By the way, the Field Journal is for sale at the Symphony web site.  It has amazing illustrations and is extremely well done.

Once again the music was beautiful.  My favorites were “Western Suite” by Elie Stiegmeister and “The Cowboys Overture” by John Williams, which I think they should play each year.  (These are YouTube links and a free way to listen to the selections.)

Here are a couple more pictures of the day. 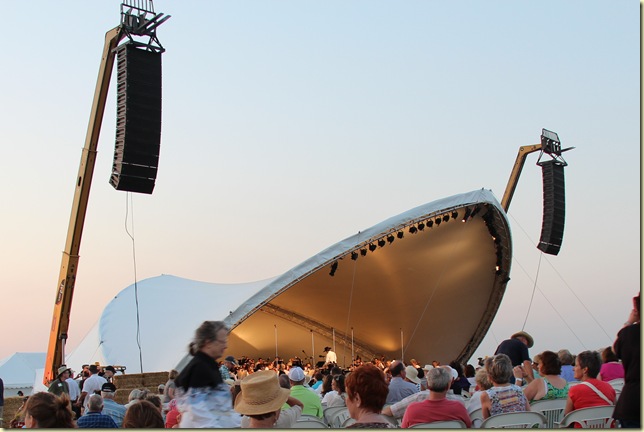 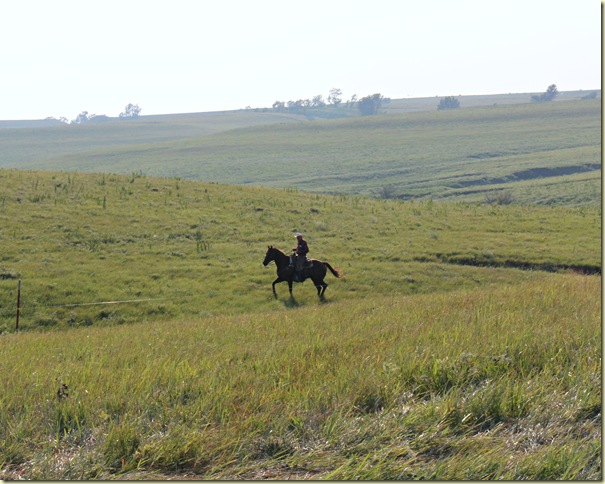 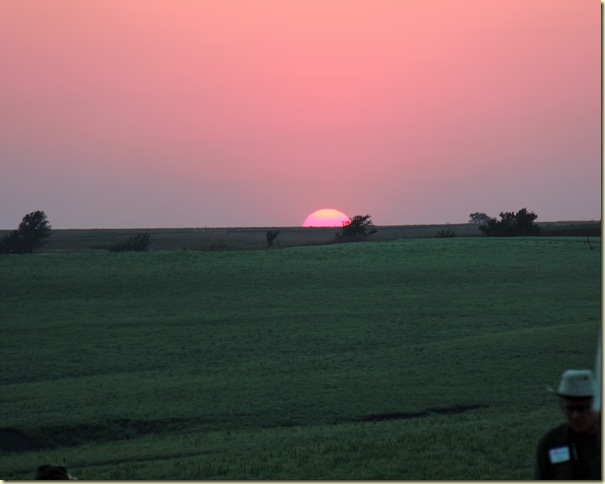 People will say sunsets over the ocean are beautiful.  They haven’t seen one over the Flint Hills of Kansas.