50 years and a lot of changes 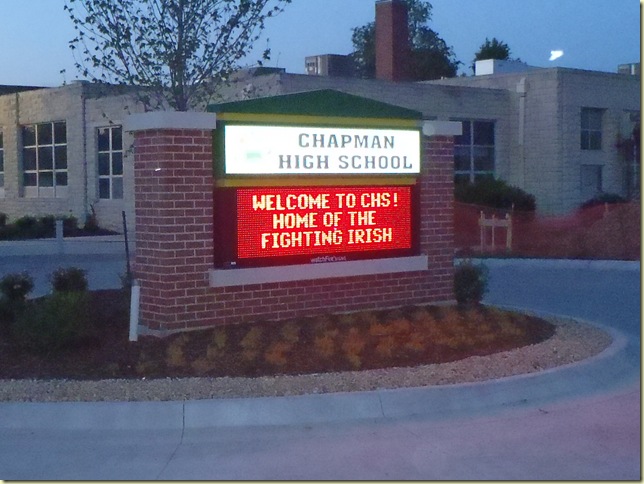 Fifty years ago Dan graduated (and two years later, I did as well) from this high school.  We called it DCCHS (Dickinson County Community High School) back then.

Had it not been for a devastating tornado in June, 2008, the school would have been pretty much the same as when we graduated.  It is  important to note that I said “graduated” because it was during our four years there that a new school was built—the one that was taken out by twister 46 years later.

Now, almost a repeat of our years in high school, we are celebrating a reunion of that 1962 graduation in another new high school.  We are looking forward to seeing all that has been done.

Dan’s class has wonderful leadership, especially Lynette, who works hard to make his reunions a success.  (They have one every five years).

Lots going on this weekend.  I will have a report.  If not a complete write up, probably a few tweets.  There was an interesting situation at Dan’s reunion five years ago involving a rat pack.  We’re wondering if we ought to risk parking there again.

What a beautiful spring in Kansas.  I think Dan and I are working outside more enjoying this weather.

We’re not the only family out and about this spring. 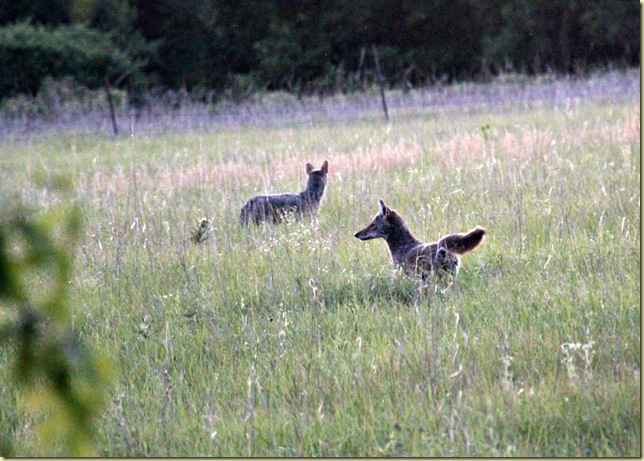 Our local coyote pair has become very comfortable around here.  This picture was taken through our bedroom window using  a telephoto lens.  Still, they weren’t that far away.  We are sure they have a den nearby because we hear them yipping and howling.

This is a sparsely populated area because of the Wildlife and Parks controlled area above Clinton Lake.  I am curious why these wild animals prowl around human population when they have plenty of open areas.  We had a skunk with a den under our barn.  There are deer who daily parade through the yard.  Right now we don’t have a dog so maybe they are just used to us and don’t think much about it.

Geo, meaning earth and cache, a French word meaning a place to temporarily hide things were combined to name a new activity available to anyone owning a GPS.  Geocaching has only been around since May, 2000, when 24 satellites around the world were activated to greatly improve global positioning system accuracy.  What is now a world wide treasure hunting game started when a computer consultant named Dave Ulmer hid a stash, recorded the coordinates and wrote about it on a technology forum.

Twelve years later almost to the day, Aaron, Adam and Evan along with Dan and I, trekked through high grass, braving ticks and jiggers to find our first stashes.  It took us a while, after hitting the coordinates, to locate this one.  It must be a popular location because lots of signatures were on the sheet inside the container. 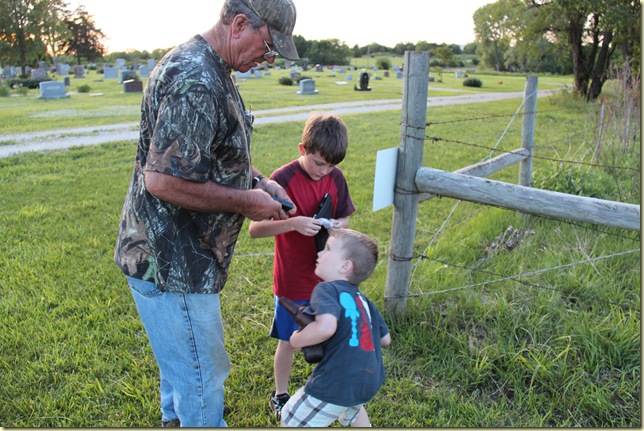 From here we found another location at a crossroads which had a larger container containing lots of cache.  We had two items to put in so we took two items out and again, signed the sheet.

Location of the geocaches are on a downloadable application for a cell phone which can be found searching http://www.geocaching.com/ or searching “geocaching” in the app store.

I could get totally hooked on this.  Cemeteries and other public areas are popular caching locations.  Wouldn’t this be a great break from roadtripping to have a reason to walk around these areas especially in small towns.

I do have one more observation on geocaching.  I have a feeling it appeals to some more than others.  Unfortunately, I don’t think Dan is as enthusiastic about it as I am.  Definitely of our three grandboys, Adam was the most willing to poke around under a bridge when it was nearly dark.