It’s late and I’m tired, but am taking a short time before I drop into bed to write a few paragraphs about the celebration of  Moms tomorrow.

Of course we all love our Moms, don’t we?  Joyful thoughts of my Mom pop into my head often because she was that kind of person and I love her.   I knew Dan’s Mom from childhood and I think of her as well.

However, I just want to take this Mom celebration opportunity to tell  my daughter and daughter-in-law how much I appreciate them and all they do.  Especially after this day of having our three local grandsons here.

In case friends my age have forgotten:  the food thing is hard enough, then there’s washing muddy/possibly tick infested clothes—not once, but twice.  Answering questions, intervention, mediation and trying to stay ahead of these bright young people.

Moms with young families, you have my upmost respect.  Today I briefly sampled your day in and day out life and I wouldn’t trade that opportunity to spend time with our our grandkids who most definitely are our pride and joy.

Lead on Kim and Drue.  Thank you for all you do to make our extended family loving and strong.

A sharp eye will spot a rock fence around here fairly quickly.  Those that settled this area obviously used them to create a fence but also to remove rocks from their fields.  Some owners have taken up the task of fixing and rebuilding, some have been relocated as a retaining wall or flower bed.

At one time a rock fence surrounded our pasture.    Places like this, it stands straight and proud. 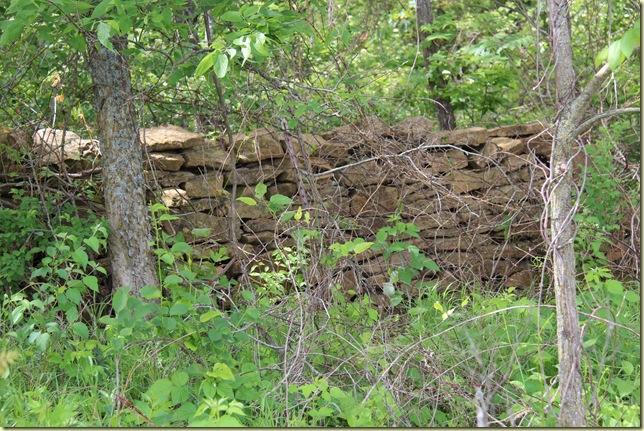 In another time, there was a different configuration of the land across one section of our pasture and remnants of a fence  cut through the middle of that part.  The main fence is gone, taken down before our time.  Dan has worked on the area over the years, but this year we decided to make a final push to clean up the rocks.

As we pick up the rocks, we are dumping them in a hole nearby where they removed rocks to build a barn. At least that was the explanation for the large holes in the pasture given by a neighbor who, along with his dad and granddad, grew up in the area. 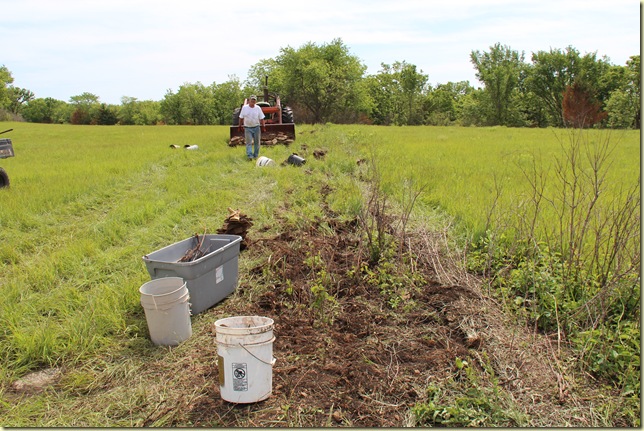 I am not educated on how rock fences are built, but it is our experience with this clean up that a base is established below the surface of the area on top of which rocks are stacked for the fence.  So, in the fence area, there almost is no end to the number of rocks that continue to appear.  And, this is native pasture and a rocky area anyway. 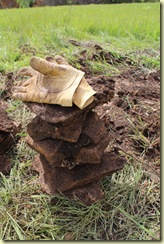 I think we are finally beginning to see the end.  I was thinking today as we gathered these rocks someone many generations earlier labored over this task as well.  It goes without saying, there is no way to build or take down a rock fence without sweat and a sore back.

It seems every spring I get a cold.  It makes me wonder if I am developing an allergy.

How did we get by before Day and Night medicine to keep the nose clear?  I especially wonder right now because the day pill has worn off and if I take the night one, I will be asleep right here at the key board.

I do know what we did before pills.  We used Vicks nose drops.  This was the drug of choice for colds at our house when I was a kid.  Somehow I think I used something like it with our kids as well.  Ever wonder what is in those nose drops?  It was such an odd thing to put the drops in the nose and feel them run down the back of the throat.

Vicks has a web site that contains a timeline of their products through the years.  I tapped on 1940’s, no nose drops.  1950’s again no drops.  By the 1960’s they had the nose spray and were probably phasing out the drops.  At no point on this timeline was there a bottle of Vicks Nose Drops.  Isn’t it curious that they would completely leave this common home remedy off their timeline?  Unless….there was alcohol in it.

I’m guessing there was alcohol and some camphol.

At any rate, I will now just pop a night pill and sleep stuffy free until morning when I will then take a day pill.  All of this without even rubbing anything on my chest.  Although  the Vicks VaperRub and warm damp wash clothe was especially nice.  Or, dropping the Vicks into a pan of boiling water and while hovering under a towel, let the steam do its work.

Warning:  the slide show on this post has more pictures of the 67 Camaro than most probably want to see.  The comments on the different winery pictures have the pairing if you feel one more picture of the yellow convertible has got to be the end.

We are not nor have ever been owners of flashy cars—except for this ‘67.  We probably got the most waves going down the road from motorcycle riders.  But, that might have been because the small pop up tent camper we were pulling is actually a retro motorcycle trailer, Kwik Kamper. (We took this little camper to Texas behind our Corolla last year to see the Blue Bonnets, as well)

Of course, many are interested in or also own classic cars so there are always opportunities for conversation.  This happened at almost every winery stop.  On Saturday, we followed a group of young girls celebrating a birthday.  The more wineries we visited, the more they tried to talk Dan into letting them ride in the back seat, even to the point of taking pictures.  I think he enjoyed those conversations as much as what was under the hood.

It is noticeable in the pictures that one hubcap is missing.  On the way to Hermann on I70, we hit a pot hole and the resulting noise was exactly as Dan predicted—we lost a hubcap.  At the time, we were both disgusted and did not go back.  The more we thought about it, we decided to try to find it on the way home.  We knew pretty much where it happened.  Sure enough, there is was—along with an assortment of other hubcaps.  I am sure there were more there, but Dan stopped looking when he found ours.

The recipes will be on down the line.

It was quite a ride getting here, though.  It started raining just east of Kansas City and continued through Lawrence.  At one point in Kansas City I was frantically looking for a gas station pump cover to park under because I thought I heard hail.  Dan didn’t think it was so we kept going.

Everything stayed totally dry, including the little tent camper we were pulling.  When we arrived here at home, it was a shock to find it was completely dry after the downpour we had been through.  It is thundering as I write, so maybe we’ll get a little something.  Everything in “in” so I can sleep without worry.

I have a few pictures.  My good camera is on the blink.  I used my little pocket one so not totally happy with how they turned out.  However, it does pretty good for a cheapie.

I am tired tonight.  Will upload a few more tomorrow.  I like this one so I’ll end with it. 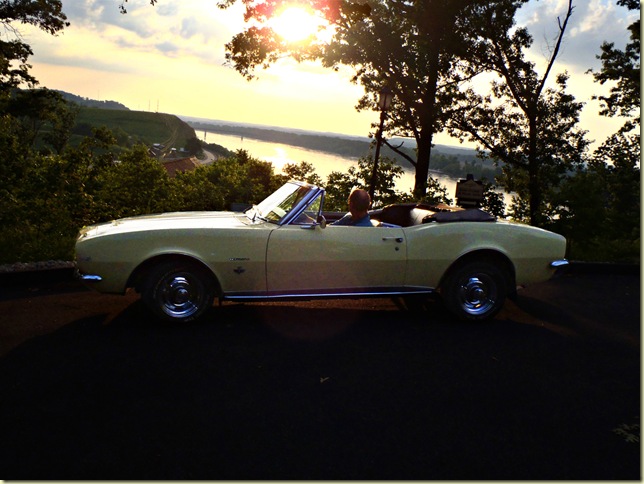