Well hello there, come right in

I’ve written before about my lack of perfection in my home.  When I entertain there always seems to be something embarrassingly out of place that I don’t discover until everyone has left.  Case in point, the shooting target stuck on the window fully decorated with Christmas lights.

So, I post this following picture thankful that no one was sitting at the  kitchen table eating when this little fellow was discovered.  However, just at the time that I did see him, I was talking to Kim.  I hope she laughed rather than roll her eyes, when I loudly exclaimed into the phone, “There’s a tree frog on my bar stool.” 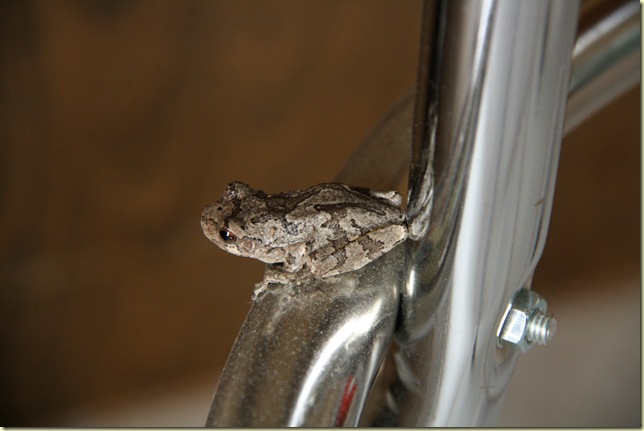 I have two explanations.  Feel free to choose the one that you think fits.  1.  He spent the winter in the geraniums brought in last fall and sitting in nearby south window.  2.  We opened the same nearby south window before putting on the screen.

Yesterday our neighbor Tom Price came by with a boat in the back of his truck.  He needed to run his trotline down on the river.  He’s been fishing with his daughter Kate, but she was working.  Dan was game so off they went.

Here are two of the five fish they caught 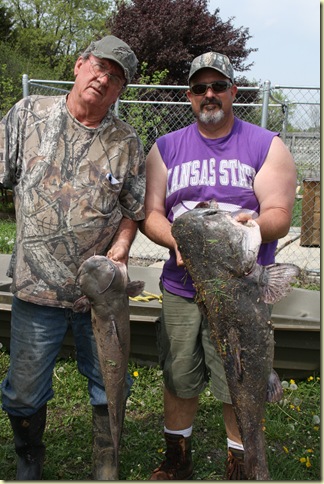 Impressive fish.  But, this is the second price…in the process of catching them, Dan hurt his shoulder.  It’s evident in the picture that it’s bothering him.

I feared the worst—rotator cuff.  As soon as we got home, he iced, took an Advil and I called our physical therapist.  We set an appointment, at her office, during the day.  Something we don’t usually do because our therapist makes house calls.

So, today it was off to visit daughter Kim, DPT at her Peak Physical Therapy office. 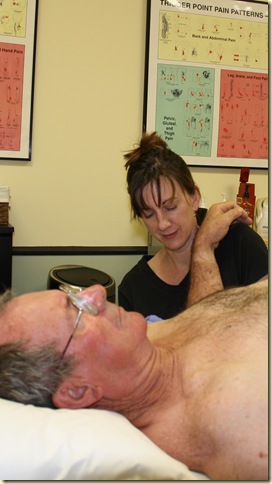 We got a good report.  With Dan’s range of motion, it was not his rotator cuff.  He did pull  muscles and will need to do his exercises diligently.  Interestingly enough, when Dan broke his collar bone several years ago in an ATV accident, he probably should have had physical therapy after it healed.  It seems there was weakness on that side which probably made him use the side he injured more.

He is feeling very tired tonight, but thankful no serious injury to his shoulder.  And, I have a fillet of the catfish he is holding in my refrigerator soaking in ice water.

Should I be concerned about this? 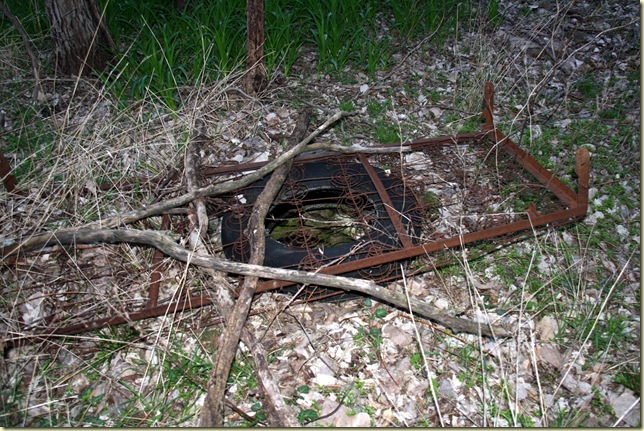 Doesn’t appear bad.  An old rubber tire with an even older bed springs on top.
Except take another look straight down 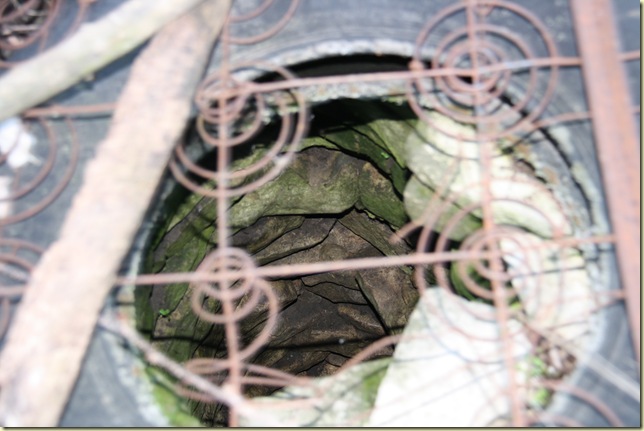 This is a hand dug well located on a long-time abandon farmstead in the upper wildlife area of Clinton Lake.  As the crow flies, it’s less than a mile from our house.  We came upon it years ago almost by accident.  It is near an access road to the river, but most would never know it’s there.  We wonder how many animals have fallen down this hole at night.  We know where there is a second open well in the same general area, but it is harder to find.   It is covered similarly.
One of these days we’re going to drop a line down this well and see how deep it is.  Certainly the person who laid the stones up the sides must have been small.  I should ask local elders for more information about these wells. I do know good well water is hard to find in our area.  Most are on the rural water district.
We’ve always thought the powers-that-be at Clinton Lake know about these, but …..
Posted by Linda at 1:26 AM 3 comments:

Clinton Lake Wildlife areas are a stop over for the American White Pelicans.  These are majestic birds, especially in flight.  I’ve written about them before.  This picture was taken by our neighbor Chip on March 23, 2005. 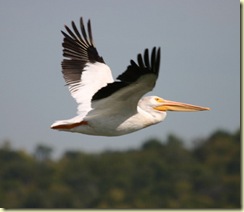 I took this picture on April 1, 2006.  The picture above & directly below were taken on the marsh.

Finally, this is a picture I took March 27, 2012, off the causeway bridge on the upper part of the lake. 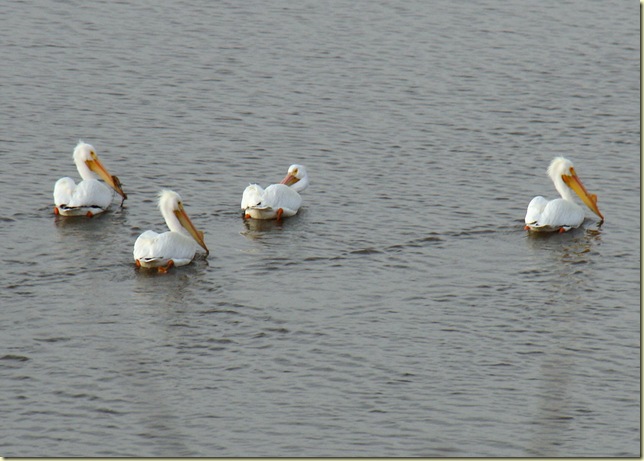 It appears the Pelicans are right on schedule this year.

A few facts about this deceptively beautiful bird from a National Geographic web site.  The body is 5’8” with a wing span of 8’.  The White Pelicans do not dive for food, rather feed in shallows, dipping up water and straining the out the food.  They then tip their heads back and swallow.  The picture above was taken in the upper shallows of Clinton Lake.  It appears at least one has something in its bill.

In checking the internet for information about the Pelicans, I found their migration through the middle Mississippi River Valley is an annual anticipated event along the Illinois/Mississippi River Road—the exact area we traveled through just over a week ago.  We did not see any, but they might be up tributaries rather than out on the main rivers.

They are shy birds so prefer to be left alone.  Maybe that’s why we have so many come through here.  They slip in and out with little fanfare. They will be gone soon. We feel so fortunate to be able to see them for a brief time each year.