We heard from several sources that there were mushrooms to be found so we decided today is the day.  No mushroom hunter worth her salt would say where but I’ll just say we hit the jackpot. 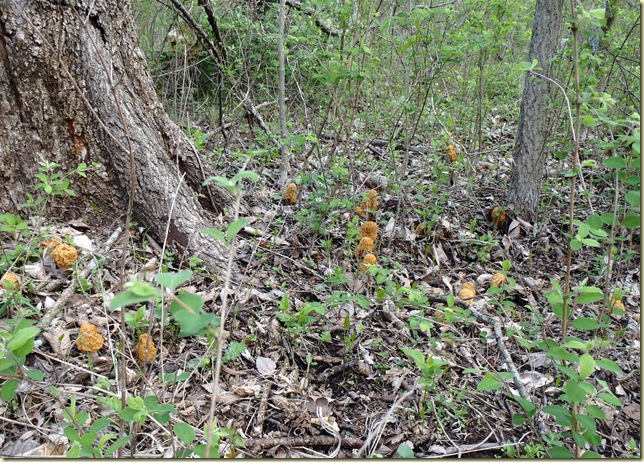 Isn’t that a beautiful sight?  Three pounds worth.

For those unsure of what a morel looks like, here is another shot. 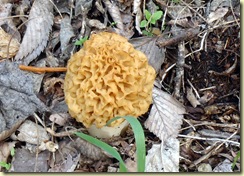 We took them to Kim, Marc and boys.  We had enough for everyone to have their fill plus extra.  I think we’re going to give it one more try in the morning.

Jacksonville Illinois is actually not far from the Mississippi River.  We cross at Hannibal going east toward Jacksonville.  I like that crossing, the bridge is nice.  Looking down the river at that point makes me think of Huck & Jim.

On our return, however, we decided to drive south, following  the Illinois River until it meets the Mississippi.   On the map, I could see a river road  on the west side of the Illinois river just south of Hwy 36, not too many miles out of Jacksonville.  The map was right, there was a road.  And it did follow the river.  Only, the road turned from paved, to gravel getting narrower as we went until finally it was only one lane.  We went by this “subdivision” next to the river so we thought all was well.

Twice we crossed streams once on a low water bridge and once just through the stream.  Finally, we saw traffic ahead and headed that way.  Just as we were merging onto a better, although still gravel road, I looked back and saw a “road closed” sign.  Something they failed to post from the other direction.

Even though  at that point we weren’t close to the river, we continued on because we (maybe it was more I) wanted to see the conjunction of the Illinois with the Mississippi north of St. Louis.   On studying the map, however,  the area between the two rivers before they meet might not be a good place to be at 5:00 pm on a weekday afternoon.  There are no bridges, just ferries.

So, we crossed the Illinois from west to east, seemingly going the wrong direction to get home and found a pleasant surprise.  After crossing the Illinois at Harden, we followed Illinois Hwy 100 south through Pere Marquette State Park, cities of Grafton, Elsah and finally Alton.  This route followed right by first the Illinois and then the Mississippi after the two rivers joined.  This would be a beautiful fall drive. 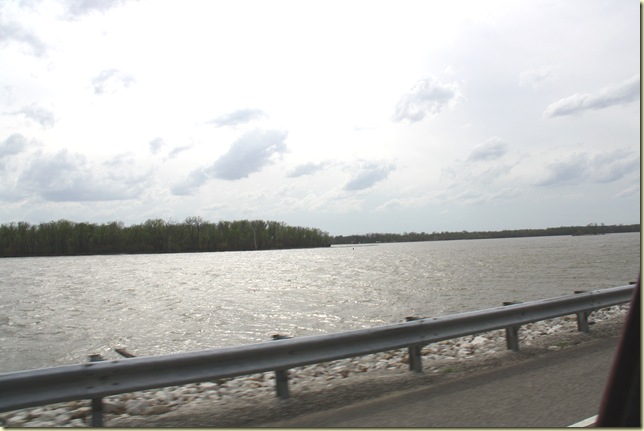 At Alton, we crossed back over now the Mississippi, wound around to St Charles Missouri and home on I70, roughly following the Missouri River.  At Kansas City we broke away from the Missouri to follow the Kansas or Kaw River.  Then at Lawrence, the Wakarusa home.

There are those who love the ocean.  And they are majestic.  However,  I still find rivers fascinating as are the people, bridges and towns near and over them.

Bridge across the Mississippi at Alton.

A neighbor stopped by briefly today so we were standing outside.  I saw this beauty from a distance so ran after the camera.  It stayed around long enough for a couple pictures and then off it went. (By the way, if I’ve misidentified it, let me know) 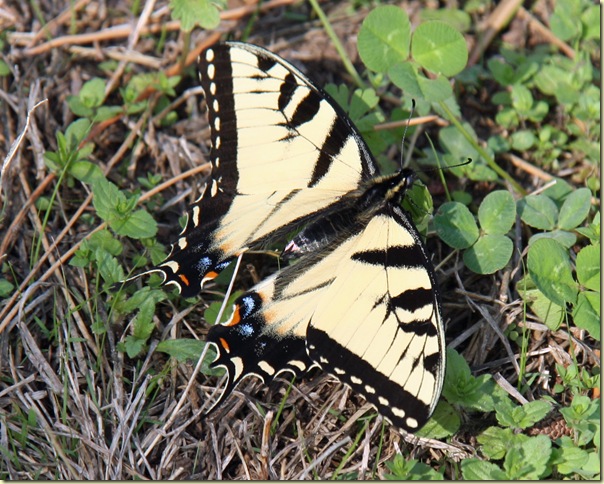 Most all of us know Hwy 36. Here in Kansas, it traces across the northern part of the state, as it does in Missouri—straight across.  Well, stay on that same highway on into Illinois and you will run right into Jacksonville.  Interestingly enough, the terrain and sights are about the same across two and a half states, farms.

It’s not highway 36 that I really want to write about.  Rather, Just Good Trade.  JGT is the name of niece Amy Kay’s new business on the town square of Jacksonville.

JGT is a fair trade store.   As I understand the movement, it helps producers in developing countries get fair value for their wares, whether it is coffee, chocolate, jewelry, stone work, baskets, or clothing.  Amy Kay is an ordained minister, but felt leading a congregation full time would be hard with her young family.  She believes strongly in fair trade.  She began out of her home and when this storefront opened up recently, she jumped at it.

Dan and I traveled on to Jacksonville from Weston, an easy 288 miles.  Amy Kay needed a little carpentry work done and Dan’s the man for that.  I helped with painting and her and Dane’s two charming boys.  Turns out, all I needed to do was put up the pickup camper and the boys took care of themselves. 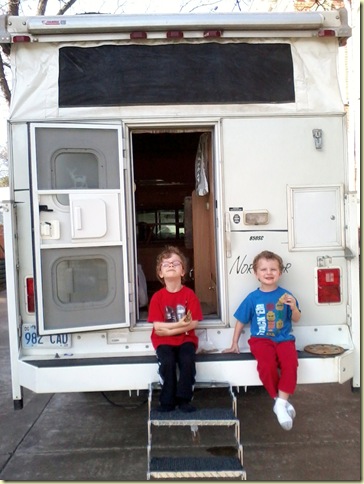 Amy Kay’s store is on the town square, I think in a perfect location.  First, the town square was recently entirely renovated.  The middle has the statue with lots of green.  The businesses around the square are viable, book store, barber shop, art glass, restaurants, an retro movie theater, not just antique and craft shops.  Jacksonville has the big box stores, but I can and did see local people coming to the downtown area to shop.  Jacksonville has two small colleges and lots of history.  I wonder if  people come through Jacksonville in route to Lincoln’s historical Springfield, on down the road only a half hour away. They should as Jacksonville is itself a destination with its historical district and huge beautiful homes. And Farris Wheel manufacturing plant. 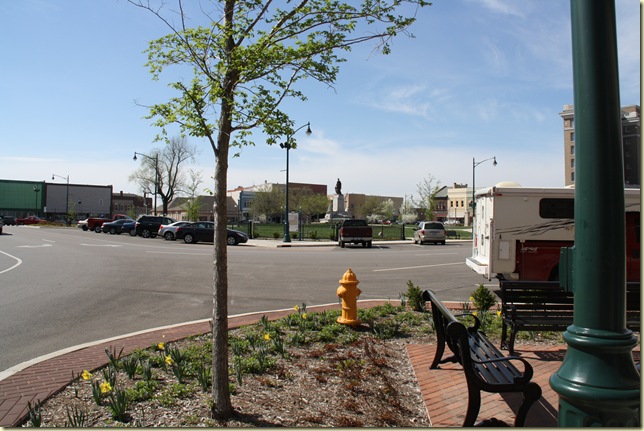 I took this picture from the store’s front door.  Across the street to the picture’s left is the movie theater.  Further down the street to the left is a locally owned cafe.  Another two or three blocks left is Amy Kay’s husband Dane’s college, MacMurray College where he is athletic director.

From her Facebook page, it looks like the soft opening went well today.  (Check it out and give her a like) I think the Grand Opening is next week.  All I know, Amy Kay is very excited about this project and we wish her the best. 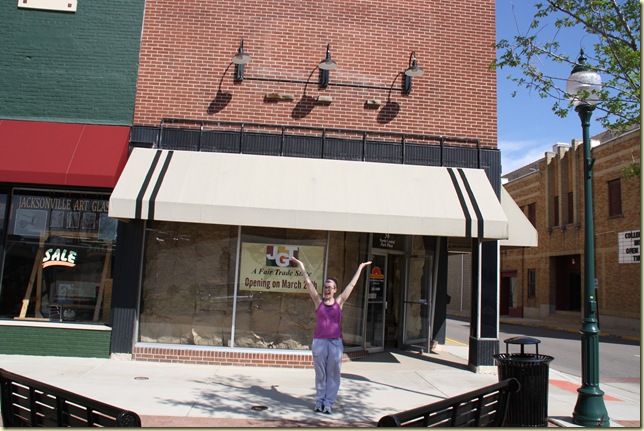 March 17th, St Patrick’s Day is a good day to visit Weston, Missouri.  We know because we were there.  Weston is located north of Kansas City, across the river from Leavenworth and on the way to our eventual destination of Jacksonville, Illinois.  So, plans are made.
Tom and Christi, neighbors and friends,  have experienced the green celebrations in Weston in the past.  While they stayed in the historic St George hotel, we secured a place in the nearby Weston State Park on the bluffs of the Missouri River where Louis and Clark also stayed.  There is a bicycle trail from the park that ends at an interesting looking museum in Weston.  Checking out those two things and the grave tour are something for another time.

Back to the city of Weston, local pictures show that at one time, Weston’s main street ended in the Missouri River.  In the mid 1800’s, Weston was bigger than Kansas City or St. Joseph.  Then a flood changed the course of the river leaving most of the historical homes and commercial buildings to quietly age without pressures of modern upgrades.  Today a major portion of Weston is designated a Historical District.  Surrounding farms grew tobacco and hemp and even today grapes for Weston’s Pritle and nearby wineries.  Most, including us, leave with a bottle of Tequila Rose from the local distillery.  The downtown shops are unique.  Even though I am not usually a big shopper, it was fun.  Of course, it helped two shops served free beer and another free corned beef and cabbage. 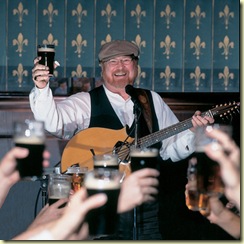 But, it is St. Patrick’s Day and so it’s off to O’Malley’s 1842 Pub.  O’Malley’s is located in the Weston Brewing Company, the tallest building in Weston—mostly underground.  It was in one of the underground vaults where Bob Reeder sang Irish songs, played multiple instruments and regularly raised his glass for Irish toasts.  He sang beautifully and I wanted to yell out to tell everyone to be quiet so I could hear.  Which probably means I am getting too old to imbibe and hear good music at the same time.
I’ll have to admit O’Malley’s “vault” did not immediately appeal to me.  First, down a stairs, then through a fairly long tunnel to a crowded room in brick, including the rounded roof.  I settled down after a large brew, good music and learning there was a second exit.
Enjoy this YouTube of Bob Reeder and raise your glass….
There are good ships,
and there are wood ships,
The ships that sail the sea.
But the best ships, are friendships,
And may they always be. 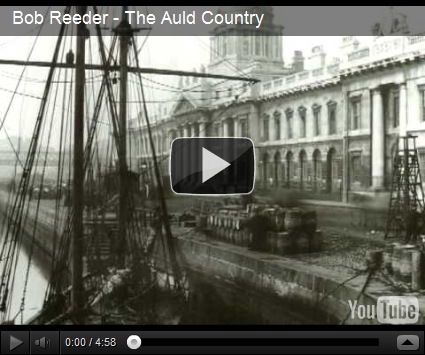 No mushrooms but beautiful woods