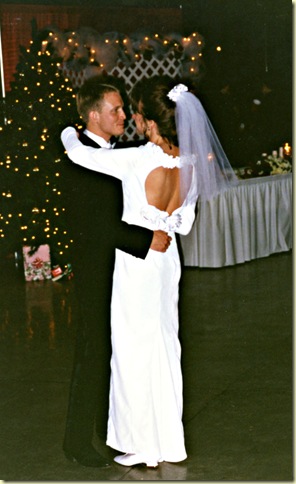 Kim and Marc were married just two days before Christmas.  It was a hectic time that year, but a beautiful celebration of their union.

Kim was to start a clinical the first of the year in California.  Certainly, Marc would want to go along.   The Christmas date was their best time.  We were concerned it would be too much of a busy time for family and friends as well as all the people who help make such an occasion happen.

We need not have worried.  It went off without a hitch.

I am probably prejudice, but I think it was a beautiful wedding.  The church was already decorated so very little had to be done there.  Between classes and studying, Kim worked very hard on decorations for the reception.  White lights everywhere as was garland.  Many, many candle holders with pine scented candles.  Kim’s dress was white velvet.  It was a fairy tale evening.

This person has it right

I am wondering why I didn’t take a picture giving a face to this man.  I can’t even write a description.  This person is all about positive attitude and that is what I see as I walk in and out of the store.

I am writing about the Salvation Army bell ringer at Sam’s Club in Topeka.  If you’ve visited that store during the Holidays, he is memorable.

The bell, his voice it’s there when driving into the parking lot.  It’s not that he is yelling, but his voice carries.   As he rings the bell, he is telling people to have a good day, to have a Merry Christmas, that their children are beautiful and God bless them, or, in our case, to drink the beer we just purchased slowly.  You absolutely can not help but smile within his outreach.

Without a Bible or a church congregation, he is the personification of the message of this Christmas season—that is to  help those less fortunate, to show love for all people and to make everyone smile and feel good about themselves.

I ask the greeter if he ever has a bad day.  No, he does not.  He begins when the store opens and works all day with the same enthusiasm and gusto.  I bet his red Salvation Army pot fills many times.  How can anyone pass without dropping in a little something with a smile.

And, then pass it on.

Postagram—five star app (in my book)

I can’t remember how I came upon Postagram.  It might be when I was looking for a way to send postcards from Alaska with  my own pictures.  For whatever reason, I have used this program a lot—18 times according to my account on the site.

Watch this YouTube video to see how easy it is to send a personal picture.

I’m writing about this app now in case an Apple product is under your Christmas tree.  Or, like just about every one else I know, you already have an iPhone.  It is also available for Android and you can use pictures on your Facebook account.

Here is a picture I put on a recent Postagram. 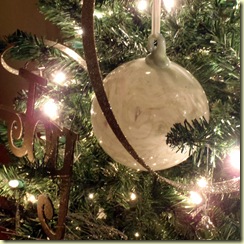 We were invited to a party where I knew I would want to send a thank you note afterward.  So, I took the picture with my little camera (those with iPhones could eliminate this step) downloaded the picture and logged into the site.  As in the video, added the picture, wrote a short note and it was on its way.  All for $1.

And, it arrives in the mailbox, which I like a lot.

For those of us using a Microsoft PC, there are many anti virus applications, free and to buy.  I have paid for Norton Antivirus, PC Tools for the past few years.

About a year ago, I decided to download iTunes into my computer.  That’s when the trouble started.  It is as if it took over my computer.  The computer slowed down and would sometimes “freeze.”  So, I deleted iTunes and the computer improved.  That led me to believe the problem was iTunes.

Then, Apple came into my life so I downloaded iTunes again.  Same thing with the computer.  I checked the Task Manager/Performance and the CPU Usage History was over 60%.  Contrary to what it might sound like, I do not have a clue what CPU is, but I know from Google that 1 to 5% is more normal.

So, to make a long story short, I found out PC Tools does not like iTunes, or the other way around, who knows.  So, I then started shopping for a new antivirus.  This web site turned out to be very informative about free antivirus protection.  From studying the information, I decided on Microsoft Security Essentials.  It’s free and a small file.  Plus, when running Microsoft, it would seem Microsoft Security would make sense.

Then came the task of installing Microsoft Security Essentials and uninstalling PC Tools.  In the end, the whole process, including running the defragment, etc, took nearly the entire evening.

The good news is, my computer is running like new!

Oh, also the computer person on the web site recommended Malwarebytes, also a free program that checks for malware.  However,  one time fee of $24 allows it to automatically run a daily check for malware.  In the long run, it might be worth it to not have to worry.

I think I am finally all set for 2012 with a secure computer, I hope!