Holton House B & B

Neighbors Tom and Christi invited us to go with them to the Holton House restaurant and bed and breakfast in Holton, Kansas, this evening for fried chicken.

Tom knows fried chicken.  I can’t tell it like he does, but I believe he has eaten at most every chicken restaurant in eastern Kansas and beyond.  With those credentials, he says Holton House is the  best.

It wasn’t too busy tonight, but our reservations were for 7:30 pm, so the rush might have been over.  The service was exceptional as so often is the case in small towns.

Almost immediately after being seated, we were served, family style, a bowl of slaw, cottage cheese and a small platter of fruit.  We were no sooner finished with this part of the meal when out came a piled high platter of chicken.

Although I don’t have the background to back it up, the chicken was exceptional.  Since we were the last to be served, they sent two pieces for each couple home.  The real test will be when we eat our leftovers cold.

For dessert we received a small piece of chocolate cake.  I didn’t think I would be able to eat it, but after one bite, it was so good, it just slipped down.

There is no doubt the entire menu is based on Brookville’s well known restaurant.  I think it is just as good too. 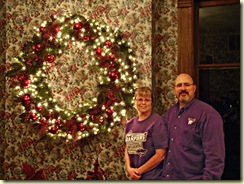 Quick, see anything wrong with this picture? 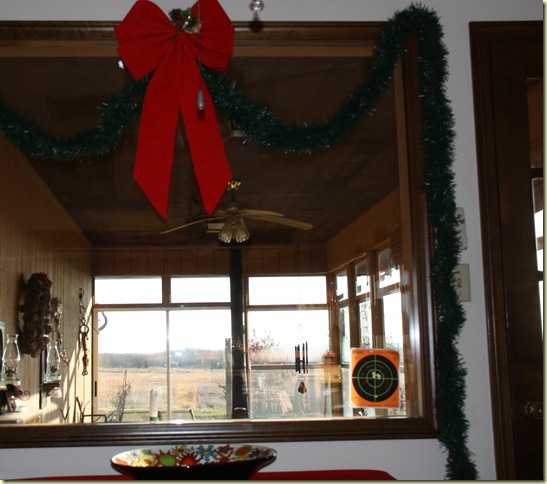 Target right?  And, not the store.

Doug was sighting in his gun over Thanksgiving and either Dan or Doug brought in the target and stuck it on the window.  Then, somehow, it just stayed there.  Here I had all those ladies over several nights ago and this target was stuck on the window.

It never fails, whenever I entertain, there is something like this that I am sure people go away saying, “Can you believe that?”

Dan scraped it off today.  You have to admit, it is a pretty good group, though.

Every third year or so, it is my year to entertain.  This is that year.  And the reason why I have been a blogging slacker.

Not counting family Christmas, or we decide to have a few friends over, tonight was my last  Christmas dinner party of the season.  This group of 14 or 15 ladies has met for years.  We usually have educational programs, but tonight was a covered dish, I furnished the ham.  Great cooks, delicious food.

Tonight one of the ladies here told us this true story about her little four-year-old granddaughter.  I have to pass it on.

This little girl’s older brother was picked to play Joseph in their church’s nativity play.  So, she felt sure her role would be Mary.  However, when the assignments came, she was to play an angel.

Last week the family visited her home.  She had a little Charlie Brown figurine nativity in her livingroom.  After her family, including her little granddaughter left, she noticed the angel which had been clear at the back was placed right in front, even in front of Mary.