I mentioned several days ago Kim and I hosted a baby shower.  We served traditional fare, cake (cupcakes) nuts and punch.

Punch…ever think,  what an odd name?  Turns out sailors brought the original drink back to England from India in the early 17th century.   Originally called paantsch, it was made from alcohol, sugar,  water, lemon, tea or spices.  The British often made it like a Wassail using wine or brandy.  When Jamaican rum was added, there was no going back.

I have a recipe I use each time I need a punch type drink.  I’m sharing it for two reasons:  maybe someone will want to use it for a celebration or the holidays and by posting it here,  I will know where to find it.  Nothing worse than to lose a favorite recipe, right?

This drink is exceptionally healthy for a punch because there is no added sugar—all juices…that is, if diet club soda or Sprite is used.  I actually don’t think the diet sodas change the flavor either.

The champagne would probably be good, I’ve never tried it.   The frozen fruit with pineapple/banana Dole juice found in the refrigerated section make a good ice ring.

Flint Hills in the Fall

Rick and Carolyn, long time friends and also relatives, stopped by Tuesday for a quick visit.  Just in passing, someone said we should make a day trip through the flint hills.  It didn’t take long for it to become a plan.

By 9:00 a.m, Wednesday,  we were headed west on I70 to Hwy 177.  We made the decision to base our roadtrip through the eastern Geary, northern Morris Counties creeks regions:  McDowell, Humbolt, Davis, Thomas and Clarks Creeks.

This area of the Flint Hills is close enough to Ft Riley, that many of the beautiful houses and barns are constructed similarly.  Rick said he was told by a friend who lives in the area that the Swedish immigrant stone masons wandered out into the local ranches to use their skills after the Fort was completed.  They might have even used left over quarried stone used in construction of the Fort. 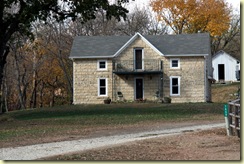 At least one of the homes is a converted school.  The newly settled areas took great pride in their school buildings and were often constructed with stone just as their homes. 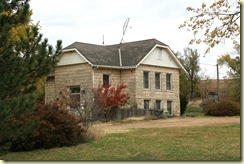 This part of the Hills has more broken fields than those further south, part in due to the fertile creek bottom land.  Note the farmstead where my Aunt Ruth grew up.  Dark farm land against a backdrop of hardwood trees, mostly oaks.  Then, on the upper left of the picture was the beautiful Flint Hills grass. 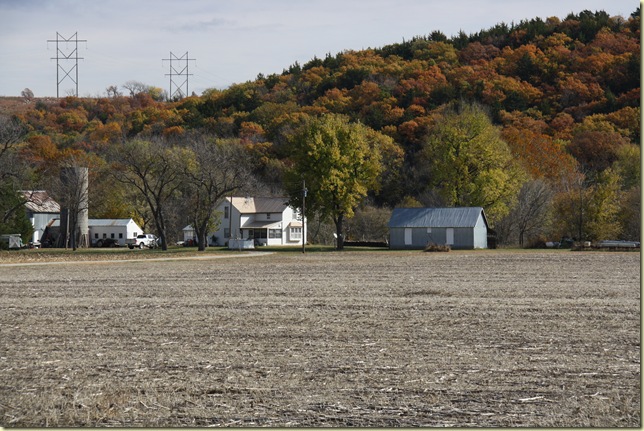 Rick and Carolyn have long time family friends who farm by Clarks Creek.  We were able to drive down to the creek on their land.  It was still running despite the recent dry weather. 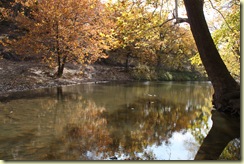 We finally made our way to here for lunch. 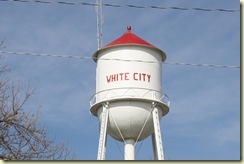 at the Katy restaurant, named for the familiar railroad that ran through parts of Kansas, Missouri and Texas.  The rail bed of that railroad runs through the state of Missouri, with Rocheport being one area I’ve written about in the past.

It was a beautiful day.  Here is a slide show of all of it.  Picture display uses SmugMug

Variations on a Pin Oak 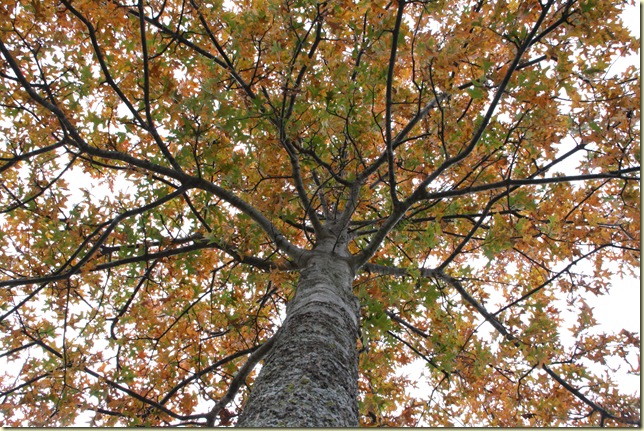 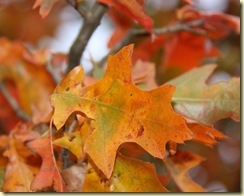 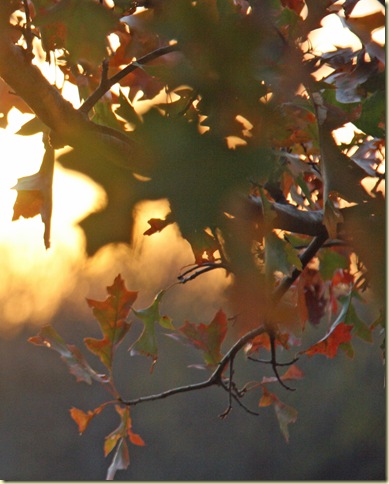 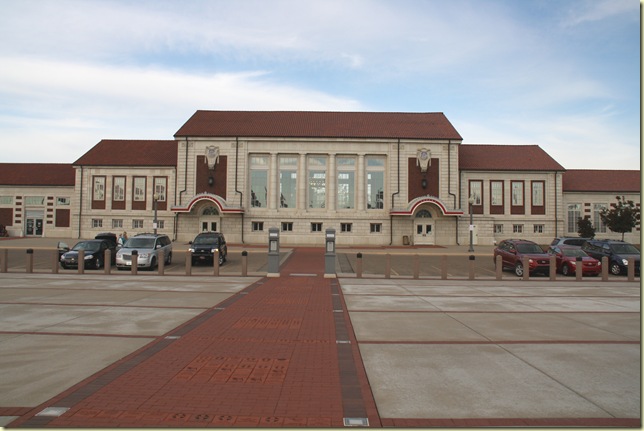 This beautiful building began as a Union Pacific railroad station in 1927.  It is located at 701 N. Kansas Avenue in North Topeka—in the flood plain.   So, it has survived a flood, as well as a  fire and abandonment.

The Union Pacific Corporation donated the station to Topeka Railroad Days.  A project team directed the renovation and it opened its doors in June, 2004.

It has been beautifully preserved inside and out.  We attended Joyce and Vernon’s 50'th wedding anniversary celebration there a week ago.  We were able to visit the museum currently on display while there.

Here is a little more history. 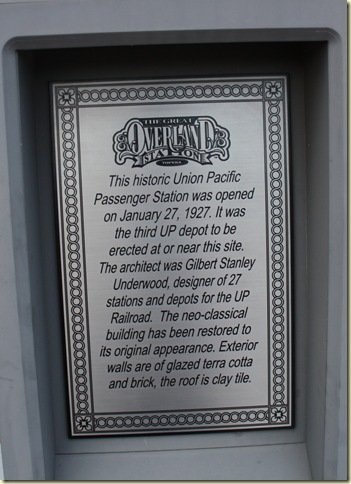 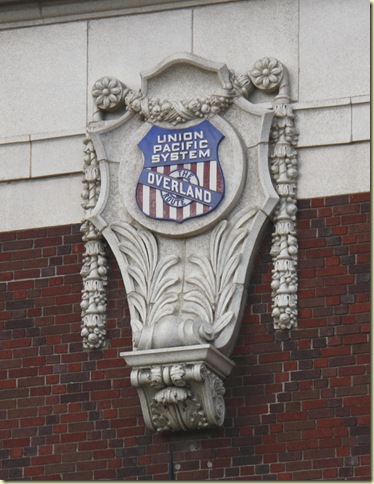 Also, there is a 50 state flay display around this war memorial on the site.  Very impressive. 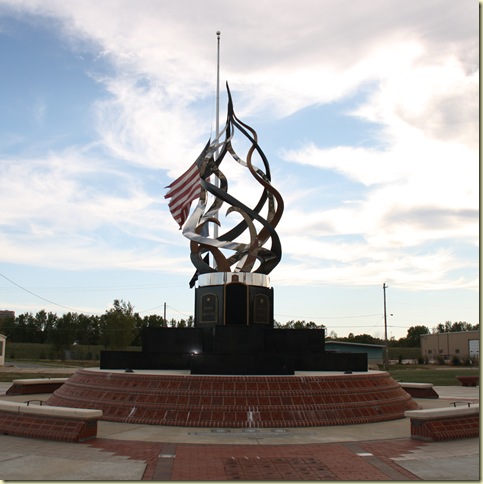 Showers but no rain

It was a fun, busy weekend.  Tara and Laura, both nieces of ours, have a baby due in December.  Kim and I gave Tara a shower this afternoon with her friends, but when we heard Laura was coming back to Kansas from Houston, Texas, we decided to have another family gathering to celebrate her new addition as well.

I started to buy cute little paper plates to serve Kim’s cupcakes, but decided to drag out my glass dessert plates. 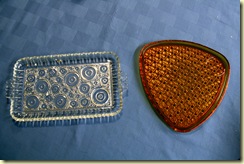 There was a time when any respectable lady’s meeting had desserts served on one of these glass trays.  Most trays were like the one in the left of the picture.  I received the “modern” tray on the right for a wedding gift 45 years ago.  Definitely, retro now.

Maybe these will make a comeback, environmentally correct as the are.  I don’t know who would still have them around, unless they are a packrat like me.

I learned today clothe diapers are also becoming popular among the young mothers.  My goodness, what will be next?
Posted by Linda at 11:30 PM No comments: