Let the cards fall where they may…..sometimes

I know I’ve written about our Cards group before.  We’re not too creative with names because “Cards” is the name of the group.

We met tonight with our usual, good food and good fellowship.  But, for me, not good cards.

I think I had one really good hand and maybe two others that were worthy of a risk, but I didn’t take it.  Just let those cards fall where they may.

Tonight Dan had a run of good cards.   Good cards and feeling confident when the cards weren’t so good, he had a very good total score.

Still, it was a fun evening and, despite a crummy score, I had a great time.  Next time I’m going to concentrate harder on the game.  I think I let some opportunities pass.

Right after I took this picture, they both barked at once.  I high tailed it to the car. 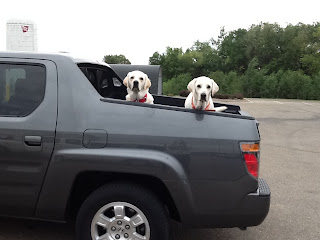 For some reason I’ve been on a cleaning/throwing out spree lately.  I’ve a long way to go, but this fall weather has me hacking away.  Today I started gathering pens and pencils stuck around all over the house, threw away half and redistributed the rest back to where we seem to never be able to find one that works.

A little used desk drawer had an accumulation of wood lead pencils, some looking old enough to spark an interest.  Here’s what a Google search netted.

First,  pencils are made from graphite, not lead.   It is unclear, but it could be as early as the 1500s a high quality natural graphite formation was discovered at Cumberland in England.  Early on, the people thought it resembled a type of lead, thus the name.

It seems England had, and still has, the highest quality graphite.  So, they had a corner on the best quality pencils into the 1860s.

William Munroe, a cabinet maker, put a wooden case around the graphite in the United States as early as 1812.  Eberhard Faber had early success in pencil production.  By 1870, Joseph Dixon developed a way to mass produce pencils.

Wood was red cedar but by the early 20th century, it was running out so incense cedar from California became popular. 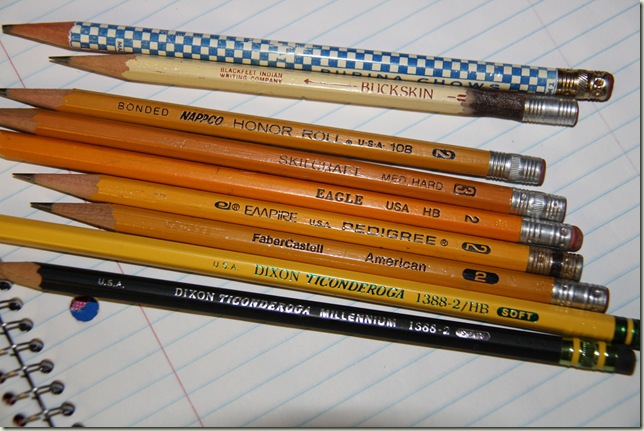 Starting on the bottom and moving up.

Dixon Ticonderoga is still making pencils, an off shoot of the 1870 Dixon manufacturing co.

Faber-Castell began in Germany, not has an home office in the US, but most pencils are made in Brazil.  Remember that Faber was in the pencil making business early and is the oldest company in the United States still in production.

Empire Pencil Co is no longer in production.  It was bought by Sanford Corp. and has probably followed the same route as Eagle.

Eagle pencil company was founded in 1856 in New York but in 1969 was purchased by Berol Corp, then Sanford and eventually bought by Rubbermade in 1992

Skilcraft is a trade name for the National Industries for the Blind.  They still are producing office products.

NAPPCO or National Pen & Pencil Company was established in 1933 but have merged with Dixon Ticonderoga.

The beat up BUCKSKIN pencil was made by the Blackfoot Indian Writing CO in Browning Montana.  They went out of business in 2001 after having been in business since 1971.

The top pencil is a advertisement pencil from Checkerboard Square now Purina.  The reason it is in the picture is because the wood in the pencil is obviously red, although it doesn’t show up in the picture.  It made me wonder if it might be red cedar.

I almost threw all these old pencils away.  Glad I didn’t.  Some from closed pencil manufacturing companies must be quite old.  Now I have something to look for at flea markets or garage sales.  I know, that doesn’t do anything for getting rid of clutter.

When I climbed out of bed this morning, the pin oak tree outside our bedroom window was backlit by a full moon.  Not sure why I didn’t run for the camera.

Then, when I came to the kitchen and started the coffee, this golden sunrise greeted me.

We’ve been fortunate enough to travel far this summer, but I still love our early morning and evening views right here in relatively flat Kansas.

By the way, I wrote about this bell here and I believe it receives the most hits as any post I’ve ever made.  There must be a lot of these bells out there. 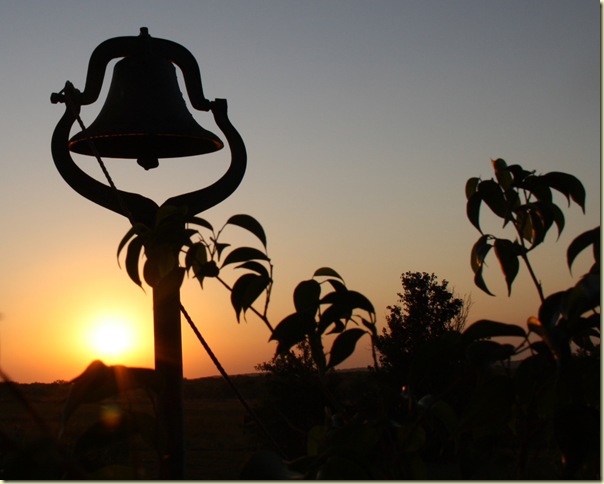 Monday morning caterpillars (and none are on tomato plants) 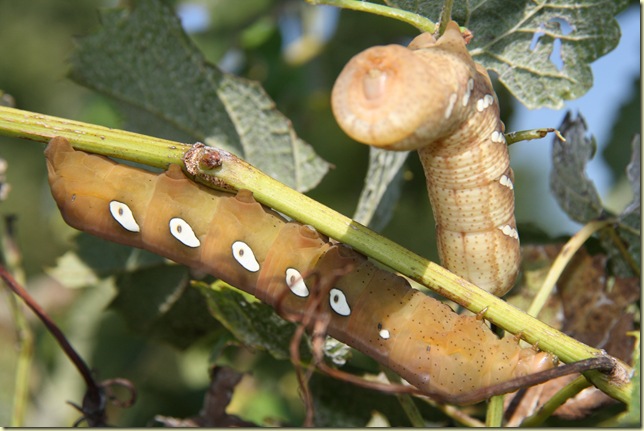 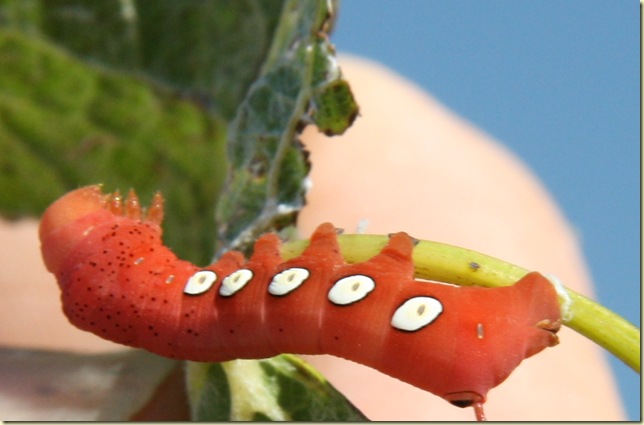 I believe the caterpillars above are Pandorus Sphinx.  Here is a picture of an orange one  and here is a green one.  They both have the distinctive spots.  Not sure about the back one.  They were found on our grape vines. 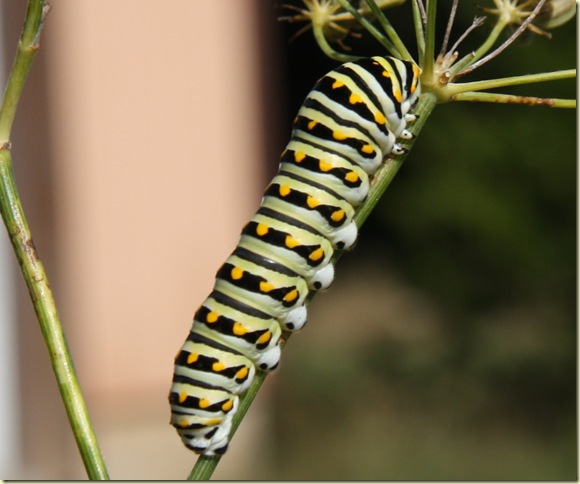 This is the black swallowtail butterfly caterpillar as indicated here.  Our fennel plants are covered with these.  Actually they’ve about stripped the foliage.

The pictures are deceptive—the top two are almost the size of my pinky finger.  The bottom two are the size of a fat match stick.