Thanks to Marc and Kim, we have a fall garden.  The corn ears are setting on so we really need rain.  The plants are fully tasseled and ready to help with making the ears with a little help from Mother Nature.

We planted a bunch of tomatoes before we left on the trip.  The heat while we were gone set them back, but they have revived and have lots of tomatoes set on and blooms.  It’s getting late for the blooms to ripen, just depends on how late we get the first freeze.  “They” say the shorter days of fall don’t ripen tomatoes too well either.

The vines are sweet potatoes.  Easy to grow and store.  Looking forward to a crop there as well.

Right now, it is looking good that we might get some vegetables put up for the winter. 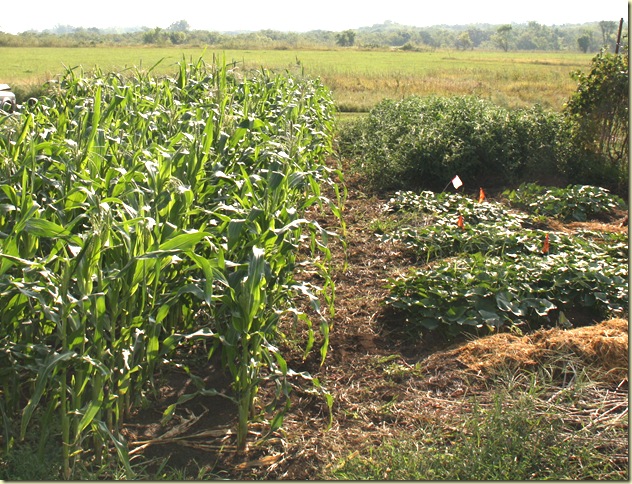 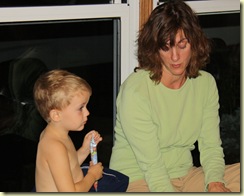 A little pale is the only clue that he had tonsil surgery this morning.  They left home at 6:30 am and were back home around 9:30 am.  Done deal.

He’s being a trouper.

Tonsils, do you have yours?

I know, crazy question.  I have tonsils on my mind because little Evan is having his removed in the morning.  His older brother, Adam, already had the surgery so I’m sure there have been some stories. Hopefully not too scary.

Back to whether tonsils are still in your throat.  If you were born in the 40s and 50s and if you had  “tonsillitis” occasionally, you probably don’t have them—neither my brother nor I do.   Our kids and most of our friends’ kids born in the 70s do.  By that time, removal had fallen out of favor.

I remember asking our pediatrician if Kim’s sore throat was tonsillitis.  He more or less scoffed at me saying there really isn’t such an illness.   In fairness, he probably called it “inflamed tonsils” or something like that.  Although our kids always seemed to have a sore throat with a cold, they weren’t regularly sick, thankfully.

It seems doctors now have come full circle for those young people who suffer with tonsils.

Evan will be home by noon or shortly thereafter.  Amazing the advances in surgery.  I suspect they want the young patients to be home where they have familiar surroundings and germs they are used to.  It won’t be the best Labor Day weekend for Evan, but I bet he’ll be one the road to recovery by Sunday.  I hope so, anyway.

What is it about Storage Wars

For any that have not seen or heard about this A & E channel show, abandoned storage units are auctioned off.  The kicker is the bidders can only look in the units from the door.  They can’t look inside boxes or most of the time see what is in the back.

The most fun about this show are the things found in the lockers.  I’m not sure what is it about digging through a stranger’s possessions that is so fascinating to me.   Most of the lockers have some value just in the used appliances and furniture, but it seems that there is a surprise in almost every one.  Paintings, posters, antiques of all types, sometimes even money.

I hope this show is legitimate. Wouldn’t it be its ruination if it came out some of the finds were planted?  I mean, doesn’t it make you wonder why people would put valuable things in storage lockers?

A nice cool easterly maybe Irene generated breeze came in late this afternoon so I headed to the garden to see if there might be a tomato for our evening meal hiding under the vines somewhere. 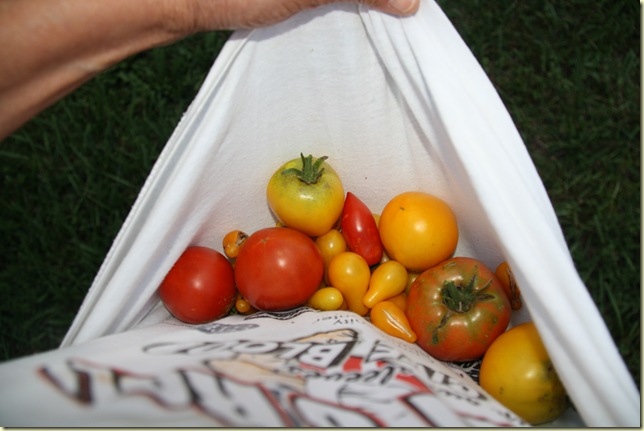 Dan was working on a mower and as I walked over to show him the tomatoes, I noticed the other red and yellow—or maybe golden—of the day. 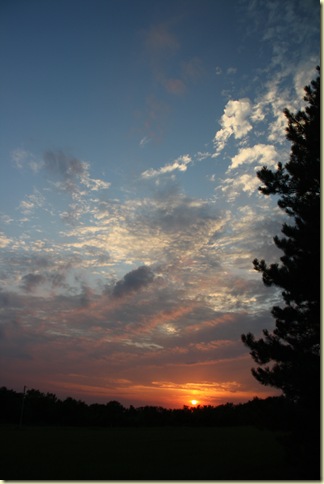 September, 2004, I wrote my first post on this blog.    Old cliché here,  but it doesn’t seem that long, especially when I go back and read what we were doing.

I was posting recipes, talking about grandkids and even writing a haiku now and then.  Not so many pictures because it was more difficult to post them.

At any rate, I’m back to posting here on a regular basis again.  I’ve missed it.   I will say, posting almost every day on the Alaska trip turned out to be harder than I thought.   For one reason, I took a lot  of pictures.  I didn’t want to load the blog down with too many so that took time.  Then, I didn’t want to misspell or wrongly identify a place we visited so I needed to go back and check literature or my notes.

It was the best thing I could have done, though, because I remember each place we stayed and visited because of it.  We’ve been on vacations before where it runs together when we get home because of my lack of journaling.

Speaking of pictures, I tried something new this time and it worked very well.  Each night, I downloaded all of that day’s pictures into a new file labeled with the date.

For you Apple lovers out there, I’m sorry, but there just isn’t any program on itunes that comes anywhere close to Windows Live Writer.   It allows you to write a post, including pictures, preview it and then save it until there is wifi available.  Once hooked up, just hit “publish” in the desired order.   So, it was not the speedy little ipad that kept the posts coming, it was my old travel computer, a little Windows XP Acer that actually worked great when the battery was charged (it had about a 30 minute life).

So, this little vacation from blogging was my seven year itch.  I hope I’m around in seven more years (I’ll be 72) so I can scratch that itch again.

Thanks for checking in.