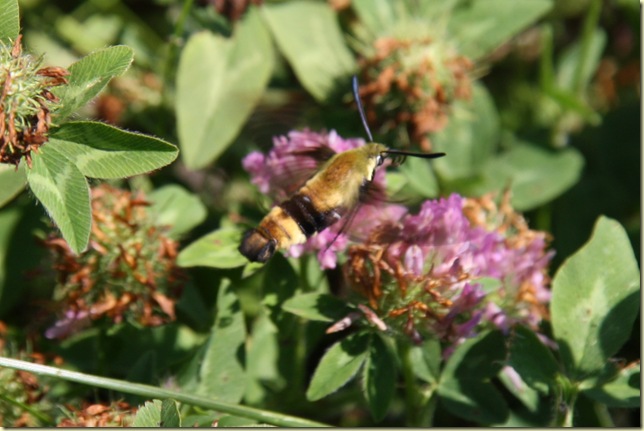 We have a patch of red clover in our yard that is irresistible to nectar loving creatures of all kinds.  We observe hummingbirds, honey bees, bumble bees and, today, this unusual hummingbird moth.   Dan kept his eye on it while I ran for the camera. 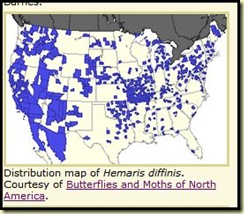 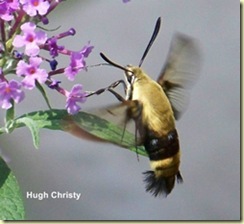 Another interesting fact about the moth:

Like most moths they have a very long tongue which they carry rolled under their chins and that they use to reach the nectar of long-necked flowers. Such nectar is inaccessible to many other flower visitors, so it seems that these flowers prefer long tongued pollinators and try to keep the others away.

It is hard to tell by my picture, but the Forest Service picture shows how the tail flares and the wings become almost invisible as they hover.

Can a turkey vulture smell? 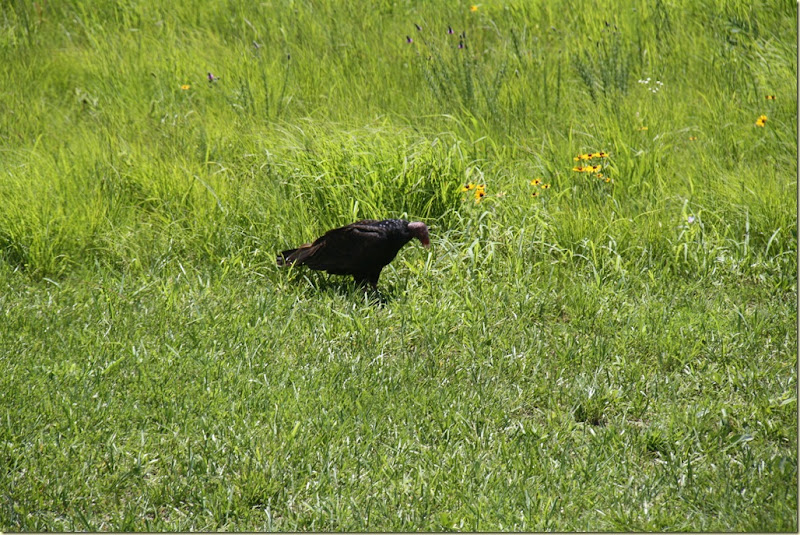 Either they can smell very good or they have telescopic vision.  Read on.

Monday morning Dan caught a mouse in the garage. He threw it out back in the tall grass.
Fast forward to late this morning. He noticed a turkey vulture (buzzard to a hard core Kansan) flying low back and forth behind the house. All of a sudden, he yelled for me to get my camera. He saw the buzzard land, hop into the grass, grab the dead mouse and was eating it on the spot.

As you know, I like buzzards. Now, I am totally in awe. They regularly soar around the valley, but very high where they catch the wind currents. That bird had to catch the scent of that tiny mouse from a long distance.
Having said that, I have to wonder how the wonderful sense of smell allows them to enjoy their choice of food.  Talking about bad is good.  I’ve even observed them eating a dead skunk.  Maybe it is the eyes….

Note:  I am adding this quote from our friend in Ontario, Canada:
"Turkey vultures have an extraordinary sense of smell. They have been known to be able to smell carrion from over a mile away which is very unique in the bird world. The turkey vulture has the largest olfactory (smelling) system of all birds."
http://www.natureali.org/TVfacts.htm
Thu Jun 23, 05:00:00 AM 2011
Posted by Linda at 11:51 PM 2 comments: 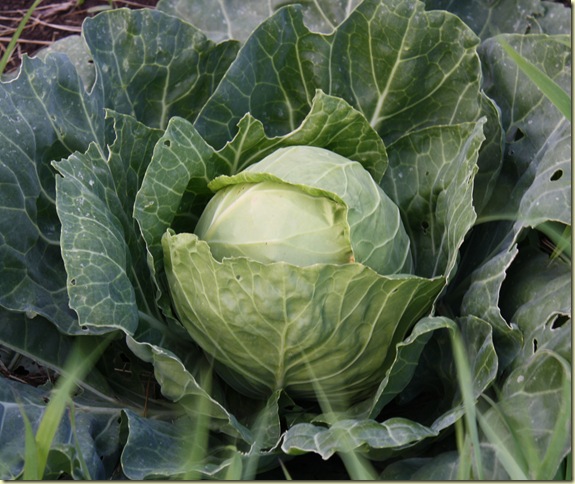 It should be sweet with all the moisture.  I picked one yesterday but we haven’t eaten it yet.

We are looking forward to one of our favorite cabbage recipes.  In addition to bierrocks,  I like to slice it up as for slaw, heat up olive oil in a skillet and stir fry until tender.  A little onion if available.  After it gets hot, pour in some beer.  Let it cook a while and add salt, garlic and a little rosemary.  Serve with cooked noodles.  Quite tasty to add a little fried bacon as well.

I've thought of Dad often today.  His picture is in the previous post with my brother in his younger, farming days.

Dad retired from farming at age 65, rather unusual for most lifetime farmers.  It helped that my brother was there to take over.  And, it helped that he could still help out when needed.

Almost right away after he retired, they purchased a RV and traveled to South Texas each winter.  They made the trip for approximately 25 years.  During that time, they also traveled coast to coast both directions.  Dad loved to travel.

Even after they decided not to make the trip south, they enjoyed visiting with family and friends.  He died just two months short of his 95th birthday and he still had dreams and plans, his heart just gave out.

His legacy to me was his hearty laugh, his pronouncements of wisdom, his dedication to the farm and his sense of adventure among many others.  Most of his friends have also passed.  If he were alive now, he would not be lonely because he had many friends, young and old.

I have not tagged my blog posts, but over the years, I have written something about him often.  He was that kind of person, he loved stories and many of them were on him.

He knew all but three of his great grandchildren.  I think he would say he had a wonderful life.  I would say I am fortunate to have had him as my Dad.
Posted by Linda at 10:30 PM No comments: