It was fun to help our nephew celebrate his graduation from the College of Education at Kansas State University today.  He is looking forward to his chosen career of elementary education.  We need good teachers.  He will be one.

Pondering over a message for his card, Dan and I finally came up with this:

Congratulations!  We applaud your achievements and choice of career.  Now with excitement and anticipation, look ahead with a solid foundation.

Tonight as I ponder over a retirement card I purchased for my long time and dear friend who spent her entire working career as a successful and much loved day care provider, it hit me how appropriate the same message would be for her card.

College graduation and looking forward to a career versus  retirement from many years working  are most importantly similar in that both are the beginning of an adventure.

Taylor and Barb, go forth and have fun!

Last Monday a group of us visited Everywoman’s Resource Center’s designer show house.  Each year the ERC picks a Topeka home to remodel then hosts a money raising open house.  It is always interesting with  good decorating ideas.

After the tour, we ate at the local franchise Cheeburger Cheeburger.  I had not been there before.  Their cheeseburgers are delicious, as are their shakes.

While there, the owner came around to visit our table.  I asked if the name of her restaurant was taken from the Saturday Night Live sketch or from the restaurant in Chicago that started it all.  She thought it was SNL.  She had only heard of the Chicago restaurant.  Well, here it is… 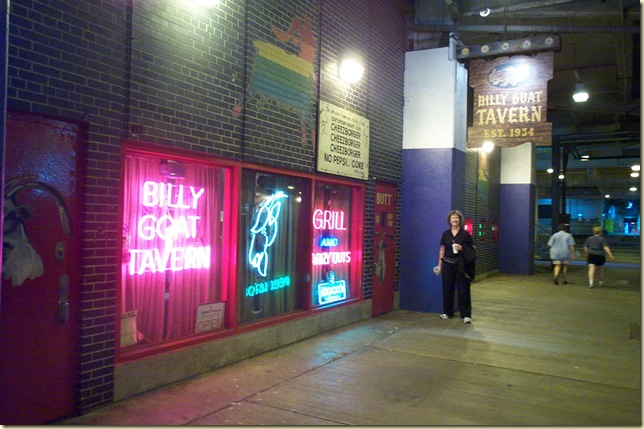 This was taken in 2003 when my friend (in the picture) Carole Groundwater-Turner and I rode Amtrak to Chicago to attend the National Rural Carrier Convention.

Thanks to our Chicago visitor’s guide, we found the restaurant, at night,  under one of the bridges in downtown Chicago.  Maybe we should have been concerned about being out at that time but it seemed alright.

We walked in the door, and a man behind the counter started yelling, “cheeburger, cheeburger, no Pepsi, Coke.”  So, we ordered a cheeseburger, bag of potato chips and a Coke.  We sat at small tables covered with checkered oilcloth, ate our burger and marveled at the number of famous signatures on the walls.  We didn’t linger, others were waiting on our table.

What a good feeling to be back to hanging clothes outside.   It’s been windy, but I try to fill the line late afternoon.  Usually the wind goes down a little then before picking up again in the evening.

By now, I hope the lesson is learned. Bring in the clothes before dark, especially light colors.
The reason is after dark these large beetle like bugs come out of nowhere and cling to the clothes.   They are not June bugs, darker but something close.

A week ago when I brought the bed sheets in,  I swatted and shook, thinking I had them all off.   However, we had only been in bed a short time when Dan flew out, announcing rather loudly, that  something was crawling on him.  Meanwhile, the beetle flew out of the bed and landed—somewhere.  We couldn’t find it.

Then, about an hour later I woke up to a buzzing followed by a wall crash.  So, I was up with a flashlight searching.  Finally found it behind my nightstand.   Meanwhile, Dan was half asleep, mumbling.

Flash forward one week.  Side tracked by cleaning in the back basement, once again the sun set with sheets on the line.  When I went out to get them, there were those darn clinging beetles.  Again, I shook and beat, feeling confident I had them all off.  This time when I made the bed I very carefully checked over the sheets—found five more.   I am not telling Dan.
Posted by Linda at 9:53 PM 2 comments: 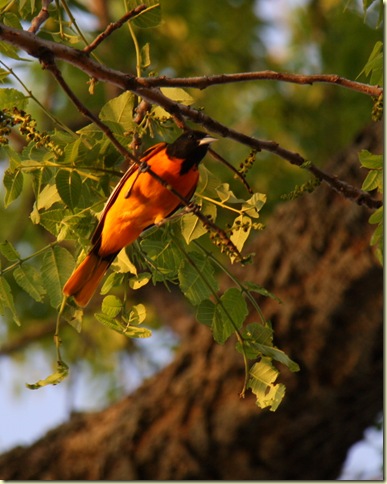 Kim & Marc have a small container of grape jelly attached to their deck.  Supposedly Orioles can’t resist jelly, especially grape.  It seems to be true as they have two coming regularly to their dish.